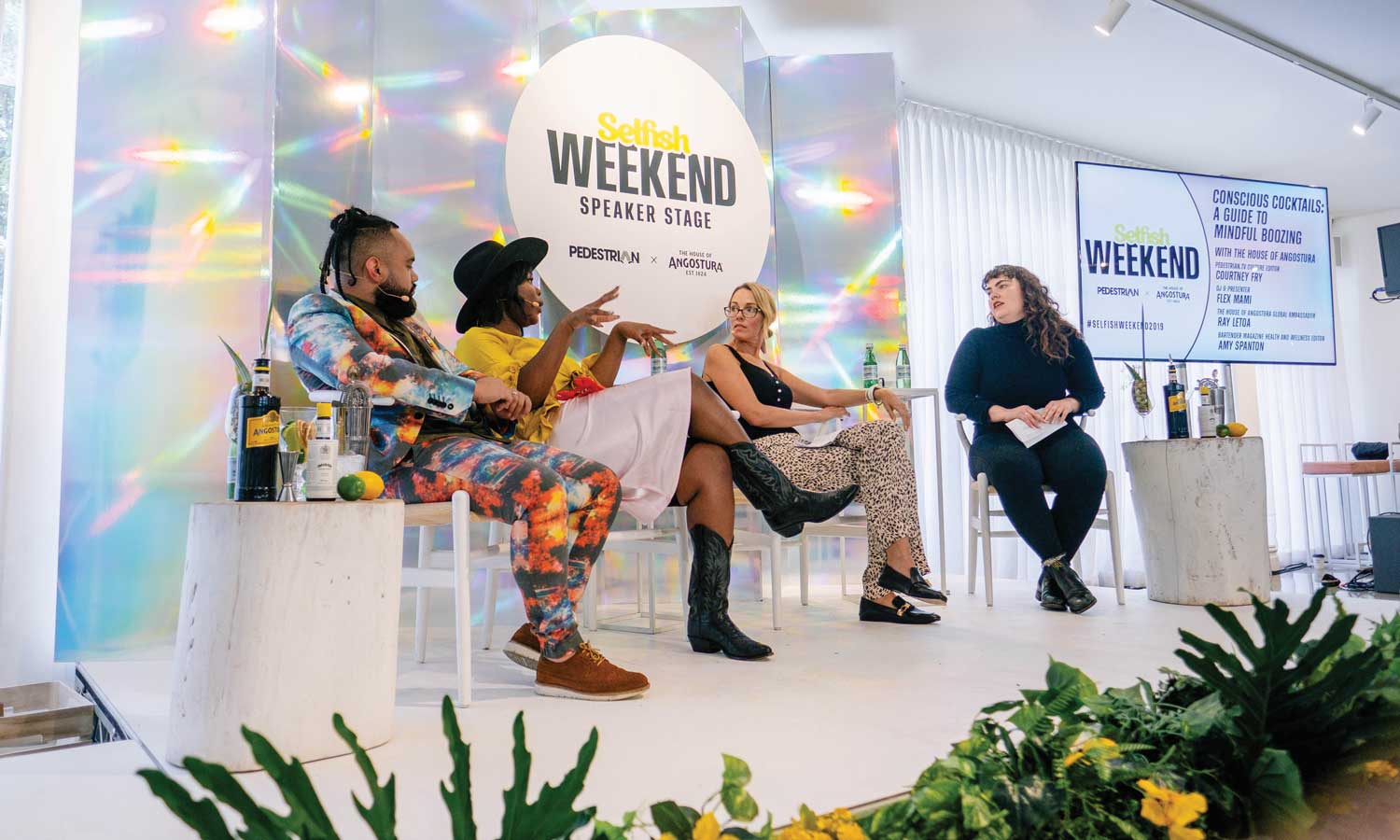 A weekend dedicated to self-care? Yup, Pedestrian.TV’s Selfish weekend (with the help of The House of Angostura) covered everything the young kids are into these days from Fury meditation to getting sized up for a bikini and everything in between.

In my new capacity as the queen of health and wellness in the Australian Bartender office, I was lucky enough to be invited to sit on a panel discussing Mindful Boozing alongside DJ/Podcaster/MTV host/radio host Flex Mami, and the wonderful Ray Letoa from House of Angostura. Hosted by Courtenay Fry from Pedestrian TV it was a genuinely eye-opening experience into the minds of millennials and iGens.

So first, I should probably paint the picture. This activation is unlike any event I’ve been to. Couched in the woke language of ‘self-care’, ‘manifestation’, ‘fury meditation’ and ‘sex positivity’, this is a whole lot of the positive stuff that cynical old gen-xers don’t often recognise about our social media savvy youngsters. We spend a lot of time banging on about the evils of social media but this event highlighted some of the great strides young people are making and the stuff they are engaging with.

Still not quite sure what it was? Well, frankly neither was I until I showed up on the day to the La Porte space on the day but maybe the words from Pedestrian.TV sum it up best: “Pedestrian TV’s Selfish Weekend presented by The House of Angostura is putting you first. It’s called self care, sweetie, and it’s a necessity not an indulgence. Hit Sydney’s chic-as-shit La Porte Space on March 16 and 17 2019 for a 2-day extravaganza dedicated to exactly that, because you’re damn well worth it. Everything from music to manifestation to masturbation, conscious cocktails and over $100 worth of gift bag loot to boot? Sign me up fam!”

With more than 1000 tickets sold over the 2 days, the target market was mostly women in their mid-twenties, a lot of them there to ogle the naked fireman and some dude from Bachelor in Paradise who was hosting a Fury Meditation session. I did ask a girl who attended his session what fury meditation was exactly. She shrugged and told me she didn’t know – she didn’t listen to a word, she was just appraising the eye candy.

Cleverer than their parents
The reason I was at this event, however, was not to pet baby goats (although it was a plus) but to chat with the crowd about mindful boozing. This is a topic that’s been rearing it’s head a lot lately and it’s about bloody time that we really talked about it – in bars, in families and in our social groups.

The first key point that came out of this discussion was that the younger generation of 20-somethings sitting in the room were drinking considerably less than their parents, and sometimes even their older siblings. And the stats don’t lie about this. Young people are drinking less, smoking less and even losing their virginity later. But why? Flex Mami had an interesting theory about this that went something like this (and I paraphrase here): There is no point eating organic, making kelp smoothies, doing hot yoga and mindfulness meditation if you’re just going to get baked on the weekend, drink 20 beers and do a bunch of lines. It’s hypocritical. And with the world that we live in this hypocrisy can be called out on snapchat and Instagram in an instant.” 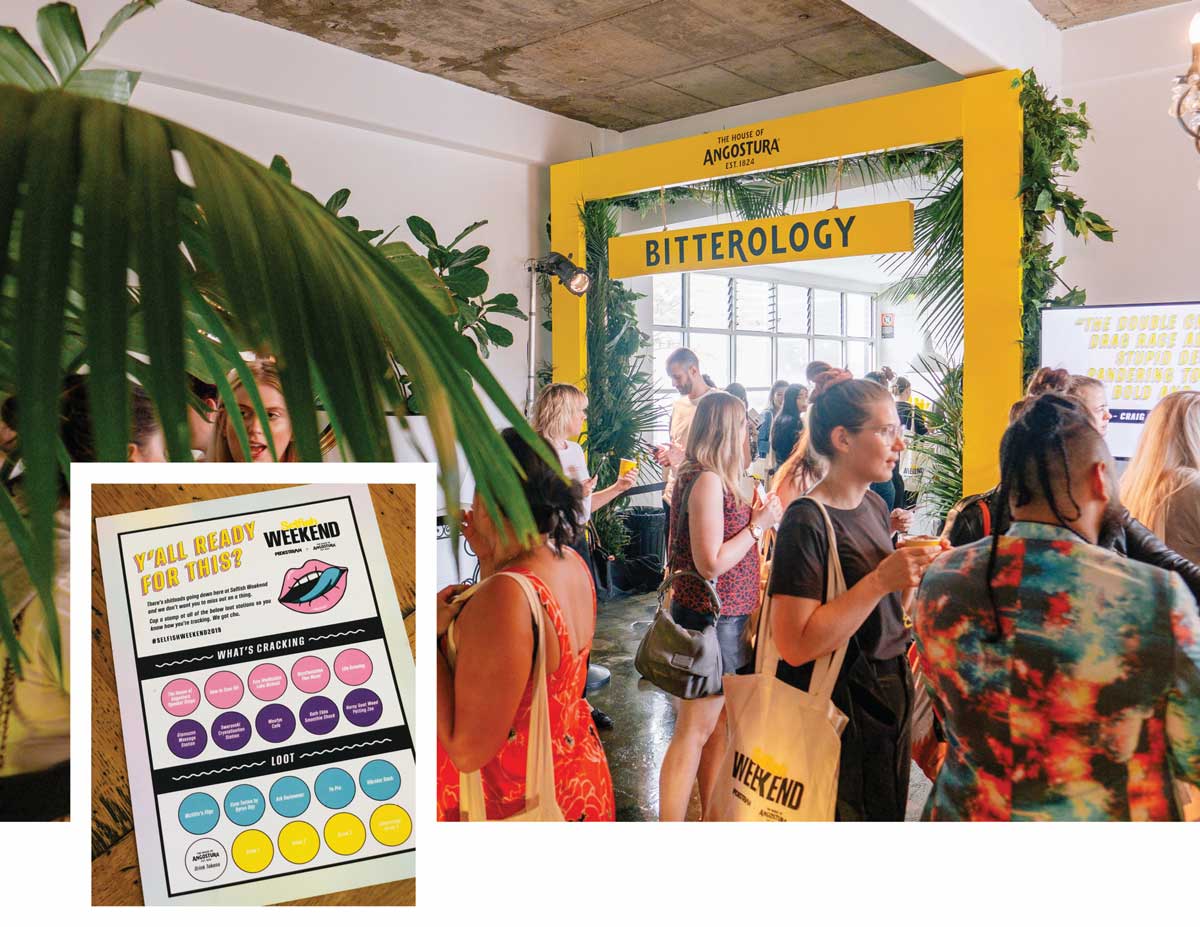 While we often decry the fact that the lives of young people are constantly being snapped and recorded for all eternity (and they might never be able to get a job because of that stupid photo they put on Snapchat) there is a flipside to this. Young people are hyperaware that their image is being recorded and, almost like a brand, they are controlling their behaviour to protect their image. One of the women said to me after the chat: “I don’t want to be the girl puking in the gutter after smashing too many vodka Cruisers with the video being instantly uploaded to someone’s Instagram story. That’s just not cool.”

Not cool also is the way they have watched previous generations ‘get baked’. The same woman said to me: “I don’t want to be like my parents, drinking every Saturday night and spending Sunday hungover. I have too much to do with my life.”

This connects with the idea that iGen or Gen Z are the ‘experiential generation’ – a bunch of youngsters who have too much to do to waste their days being hungover. Whether it be figuring out how to make their household waste-free, going to hot yoga or hitting up a two-day self-care event called Selfish. They don’t have the time to waste with a hangover.

What do bars do, when people are drinking less?
On this point, it’s not all doom and gloom. It means that the experience is all important — the showmanship, the passion for the ingredients, the taste and the balance. Young people are still going out but they might have an alcohol free cocktail and a couple of craft beers. They want taste and they are happy to pay for it.

As we know, the drinks industry is getting ahead of this trend with a big push towards low and no-ABV products. And from the bars there is also a massive push towards incorporating ‘wellness’ products into cocktails – think Kombucha, fermented products, seasonal herbs, fruits and more.

As Ray Letoa, House of Angostura Global Brand Ambassador, pointed out, low-ABV drinks are nothing new (Lemon, Lime and Bitters, anyone?), it’s the way bars are doing them these days is impressive. Thankfully, we are seeing the dying out of the tragic mocktail and many bars are leading the way with a focus on both non-alcoholic and low abv options. Eau de Vie offers six of their list cocktails alcohol free. Melbourne’s new bar Fancy Free has just launched their cocktail list and it is proudly one-third no ABV, one-third low-ABV and one-third standard cocktails. Redemption bar in London is vegan and alcohol free. Their cocktail list includes health forward offering such as the Pious Pina Colada; a tropical combination of fresh pineapple juice, lemon juice, frozen pineapple chunks, coconut kefir, coconut yoghurt and coconut milk.

Don’t be a dick
One of the main points covered in this session was how to curb or stop your drinking. And for those in the bar industry (and many other industries) this can be a tough thing to do. Flex Mami, a fellow panellist and non-drinker, who works as a DJ (among other things) just realised drinking wasn’t feasible for her, and if it wasn’t just to get baked then what was the point?

Some others in the audience raised the issue of dealing with expectations in the workplace. For example, you work in PR, and the expectation is, you will drink at events, how do you deal with this? My tip for this is to pretend. I don’t usually advocate lying but sometimes the effort involved in sharing with a work colleague why you are abstaining for two months is simply not worth your energy. Hold a drink (tinnies work really well for this as no one can tell how much you’ve had to drink) or order something that looks like it could be alcoholic. Sadly, while we can talk about not drinking, it’s a different story in the real world and in certain jobs, and there are real expectations.

This shouldn’t be the case with your mates though, right? It shouldn’t be but it often is. The only way this will change is if we shift our attitudes to people when they tell us they aren’t drinking. Don’t be a dick about it. Don’t say “oh, come on, just have one”. Don’t make someone feel that they can’t be part of your party if they’re not drinking, or not drinking heavily.

A big shout out to Tanya Mah and the team from House of Angostura for getting behind this event hosted by Pedestrian.TV and for pushing the message about mindful drinking.

Saving Plates, the website trying to save hospo businesses