The Boulevardier is a drink whose specs will feel familiar to any of you who have enjoyed a Negroni or two: we’ve used equal parts bourbon, Campari, and sweet vermouth here (though the earliest reference to the drink has a slightly different measure of whiskey), and you’d be right in thinking that’s it’s a Negroni made with whiskey in place of the gin.

But it doesn’t mean that this drink is a Negroni knock off. The prevailing origin story of the Negroni dates its invention to 1919 and one Count Camillo Negroni at a bar called Casoni in Florence, Italy, though there is some debate about the merits of this (some accounts trace the drink back before 1900, but we’re talking Boulevardiers here). And it appears the earliest written reference to the Negroni recipe is a drink called the Campari Mixte in 1929 with the famed equal parts ratio.

The thing is, the Boulevardier gets a mention a couple of years earlier in Harry MacElhone’s 1927 book, Barflies & Cocktails. It was equal parts bourbon, sweet vermouth, and Campari, and so named for a socialite American who frequented the bar and owned a magazine called The Boulevardier (or so the story goes). That naming habit — and the drink’s formula — was apparently a regular thing for MacElhone, who would later invent another riff on the drink called the Old Pal, using rye, dry vermouth, and Campari, and name it for a sports writer he referred to as his ‘old pal’.

It’s a nice bit of bartender bluster and banter, and it makes a great tasting drink. 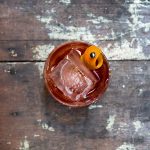 Check out the Beetroot Negroni from Pearl Diver Cocktails & Oysters