Salt. It was once, like many of the ingredients you use behind the bar, a valuable commodity. It has been said that the word salary stems from the Latin salarium, and that Roman soldiers were paid in salt. That seems to be a commonly accepted myth, but the fact remains salt is an essential and sought after ingredient — indeed, a lack of salt for humans can result in dizziness and nausea and camps; a severe lack could result in a coma or even death.

So let’s sprinkle a little salt about (we’ll do what we can to avoid discussing Salt Bae, too).

Salt appears naturally on earth. It’s not something that needs to be cooked up in a lab. And it is something that animals need in order to live. So when you hear that in the 6th century, Moorish traders in the Sub-Sahara considered salt as literally worth its weight in gold — ounce for ounce — well it makes sense. Gold might help us to live, but without salt we’ll die.

But salt was a big deal well before then — it was even a big deal to God, who told Moses (in one of the decidedly less interesting commandments) that He wanted his meal offerings to be seasoned with salt: “And every meal-offering of thine shalt thou season with salt; neither shalt thou suffer the salt of the covenant of thy God to be lacking from thy meal-offering; with all thy offerings thou shalt offer salt.”

Salt was popular with those of a polytheistic persuasion, too, with Plato declaring salt to be “a substance dear to the gods.”

These days, however, salt is in the service of a different god: packaged and fast foods. Saints McDonald, Sanders, and McCain et al is where around three quarters of the salt we consume comes from (hence the push to cook your own food from scratch from healthy government types).

How salt is made

There are a number of different ways to make salt and much of that depends on the type of salt you’re making.

Only a small percentage of the salt that is made is intended for cooking and eating purposes — the vast majority of salt production is for use in industrial applications.

But of the types of salt made for cooking and eating (and drinking) vary depending on the type of production methods employed to make it.

Salt is made either through the evaporation of seawater, through the creation of salt brines, or by salt mining.

Most table salt is made from salt brines, with the most expensive stuff — your sea salts and fleur de sel, however, use more labour-intensive harvesting methods and hence, they cost more.

Here’s how fleur de sel is made: the stuff in Guerande, on the coast of Brittany, France, is made by channeling sea water into nearby marshes. The sea water will sit there and evaporate to a depth of just a centimetre or less, crystallising the salt and forming flakes which are the gently raked off by hand. It’s a laborious and expensive process.

But it does create a texture and a crystal unlike other salts. That’s why these salts are probably best saved for garnishing, and not for inclusion in your drinks or in pre-batched concoctions.

There’s plenty of other salts that’ll do that job more cheaply.

So how much salt is too much salt?

Despite the health warnings and the general war on salt, one fact tends to get overlooked: we actually need to salt in our bodies to live.

In fact, all animals do — salt plays a key role in maintaining healthy internal systems, in the digestive tract, and is “essential in maintaining the osmotic balance of fluids in the body.” Just about all mammals have salt receptors on the tongue — it is one of five tastes along with acid, sweetness, bitterness, and umami — though most animals get enough salt through their regular diet and don’t need to seek out salty foods; herbivores, it seems, are the ones most likely to seek out a lick of salt or two.

But is salt that bad for us? Well that depends on who you’d prefer to listen to. You can find people out there who suggest that rather than eliminating salt, we should be eating more of it, but from what we can see at the moment those books tend to be written by people who push keto diets  and get recommendations from paleo authors.

But government health organisations tend to disagree, with the large weight of evidence backing up their recommendations that salt can lead to increased blood pressure (which in turn leads to an increased risk of heart attacks and strokes). Whilst governments tend to recommend eating six grams or less of salt per day, the Heart Foundation recommends five grams or less, or less than a teaspoon a day.

A pinch of salt for a more perfect sip

A little pinch of salt — a small amount, in the drink, and not on the rim — can see a drink’s flavour go a long way.

It’s referred to as sub-threshold salting by Dave Arnold, the author of Liquid Intelligence and owner of hi-tech Lower East Side bar, Booker & Dax, in New York.

He used to write a blog called Cooking Issues, in which he’d often go into the science behind drinks (that’s the subject of his book, too). In one piece, he wrote:

“The secret ingredient in our cocktails isn’t love, it’s salt. A pinch of salt added to most cocktails brightens them up and rounds out the flavour tremendously. You don’t need a lot. Add so little you don’t even perceive saltiness – I call it ‘sub-threshold salting’.”

A tiny pinch of salt is enough to reduce bitterness in a drink, and gives other flavours more oomph.

If you’re sceptical of this, you can try it out for yourself. Heston Blumenthal, the spectacled chef behind the science-driven Fat Duck restaurant and impossible Masterchef challenges, has written before about a useful experiment you can easily try:

“Pour some tonic water into two glasses. Add a pinch of salt to one and taste it. Now add a little more salt, and taste again – the tonic will have become sweeter. Carry on adding salt and tasting, and each time the tonic will be sweeter.” 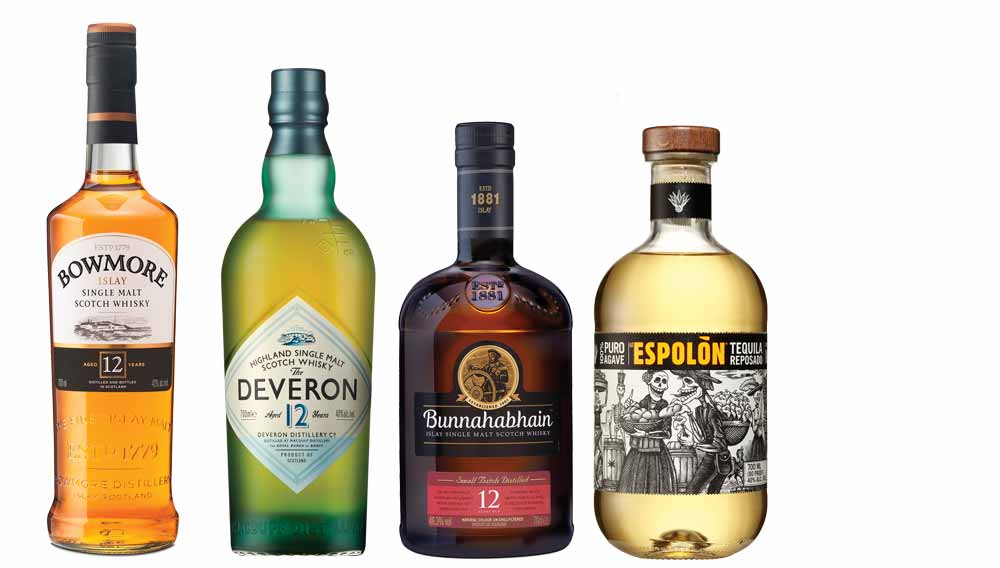 Bowmore 12
This Islay whisky shows a gentle peat, with citrus and honey aromas on the nose, and a hint of saltiness, along with cacao and spice on the palate.
Beam Suntory/CCA

The Deveron 12 Years Old
This Scotch whisky hails from the Macduff distillery which sits where the River Deveron meets the sea; think notes of apple, spice, and a hit of brine.
Bacardi-Martini

Bunnahabhain 12
Bottled without colour and non-chill filtered, there’s plenty of sweet fruit (thanks ex-sherry casks), nuts, and a distinct coastal influence on this dram.
Proximo Australia

Espolon Reposado
A light briny note can be a hallmark of fine tequila, and this reposado has that as well as roasted agave notes and tropical fruiit flavours on the palate.
Campari Australia