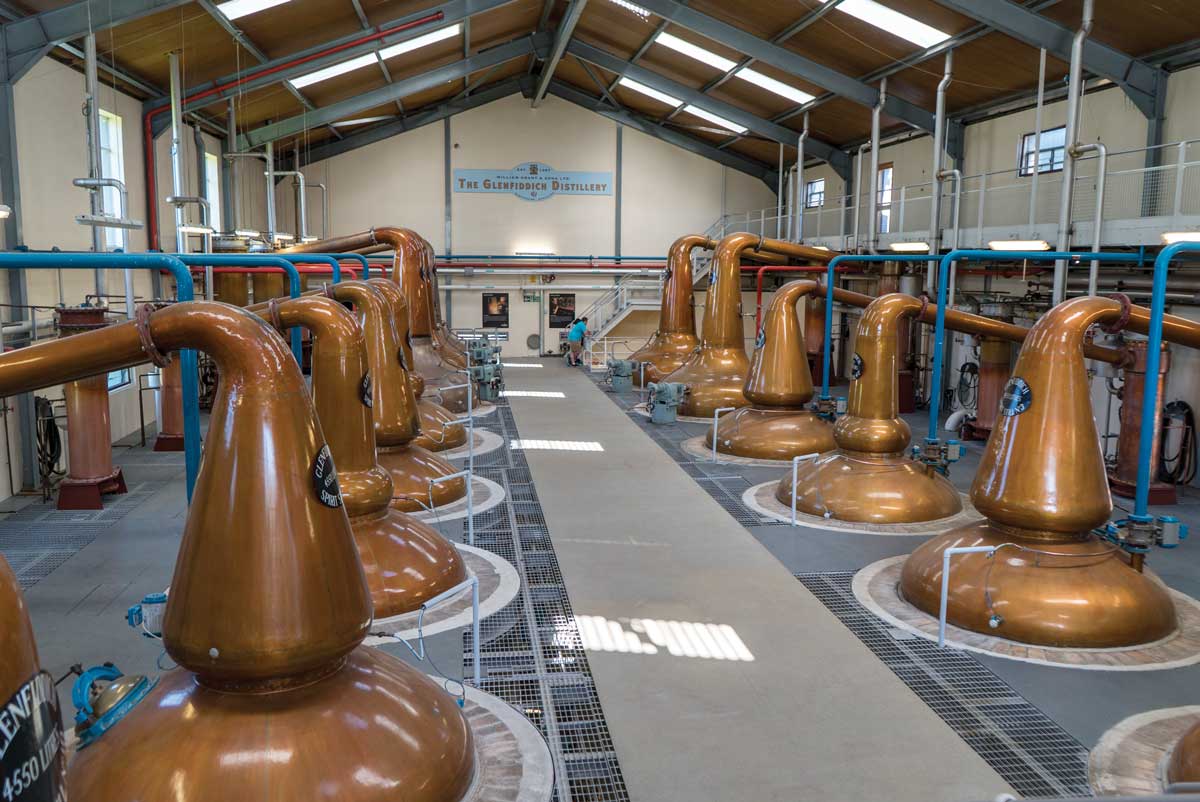 The production of distilled spirits is a complicated process — from the choice of base material, and all the way on through to ageing, there’s any number of choices the producer must make which will determine the spirit’s final character.

One of those choices — a huge determinant of the final spirit — is the choice of how exactly to distil the spirit. We’ll focus here on three ways: the use of a pot still; the use of column stills; or some combination of the two. (There’s a fourth, vacuum distillation, but it’s so damn expensive and inefficient that few people bother with it — though the Bacardi-Martini-owned Oxley Cold Distilled Gin is one of them).

Let’s get into it.

What is distillation?
Distillation is the action of applying heat to a liquid, so that the components within the liquid which have a lower boiling point become vapour, and are then re-condensed into liquid by cooling the vapour.

So, applied to the production of alcoholic spirits: heat is applied to a liquid — it could be wine, or a beer — and because pure alcohol has a lower boiling point of around 78.5 degrees Celsius, the alcohol vaporises traveling up out of the still and is re-condensed into a liquid by cooling it. Essentially, it is separating the alcohol from the mixture, and through further distillations, concentrating the alcohol further.

That’s the simple explanation. The more complicated explanation is that there are other alcohols, take for instance methanol: it boils at a lower temperature, around 65 degrees Celsius, and thus vaporises first before ethanol (pure alcohol) does at 78.5 degrees Celsius. We also know methanol is no good for you, right? The methanols are collected and discarded, and this is what’s known as the heads.

Spirits distillation takes place chiefly through one of two systems: pot distilled, or column distilled. (Though these two types of distillation are often combined).

Pot stills
Pot stills are the glorious, copper-crafted kettles that inspire much romanticism among booze geeks — much of the Scotch whisky industry is built on the mythology around each distillery’s pot stills.

That mythology comes down to the properties of the metal from which the stills are made: copper.

For one, copper is a great conductor of heat (just ask anyone who uses copper cookware in the kitchen). Copper also has the benefit of the way it interacts with sulphurous compounds created through the fermentation process — it tends to attract them, pulling them out of the final spirit.

The shape of the stills themselves will also also affect the final spirit. Generally speaking, stills that are more squat in shape will allow more of the lower, oilier alcohols to come over into the spirit; stills that are taller in shape, like the ones at Glenmorangie (which are about the height of a male giraffe) create a more delicate spirit. This then affects the choices the distillery makes when it comes to ageing — those more delicate spirits will take on the wood and mature more quickly, whilst heavier spirits will need more time with wood to mellow the heck out.

So how does a pot still work?

Put simply, into the base of the pot goes the wash to distil — essentially it’s a liquid mixture with a low percentage of alcohol in it. The pot is heated, and the vaporised alcohol rises to the top of the pot and out a side arm — known as a lyne arm or a swan’s neck — and travels down into the condenser where the vapour is cooled and recondensed into a liquid. The condenser usually takes one of two forms: a worm tub condenser, or a shell and tube condenser.

The worm tub condenser is essentially a tub filled with water in which the vapour comes down through a coiled copper tube sitting within the tub.

The shell and tube condenser functions a little differently: the vapour comes into the tub, within which there are many smaller copper tubes filled with cold water. The chief difference between the two is — all things being equal — the shell and tube method sees more copper contact, and thus removes more of the sulpurous compounds from the spirit.

Column stills
The column still is, on the grand scope of time in which humans have been distilling beverages, a relatively new thing. Prior to its invention, distilling was done in batches in pot stills (or something similar — the approach was more or less the same).

But the advent of column distillation changed the game.

Column distillation is also known as continuous distillation, and it has the benefits of being more efficient — as the name implies, the continuous still can run day and night — and it is able to rectify the spirit into a much higher proof and much more cleanly.jn
The first patent for a column still was filed by a Scotsman, Robert Stein, back in 1828. His work built upon the efforts hof earlier inventors (both English and French) and itself was improved upon by Irishman Aeneas Coffey (who lent his name to his own patented still, the Coffey Still, in 1831).

As with any advance of technology, the adoption of continuous distillation would go on to greatly disrupt the Scotch whisky industry and pave the way for the bottling of blends, Scotland’s great gift to the drinking world (before the popularisation of single malt, that is).

So how does it work?

Whereas during pot still distillation, the wash is fed into the bottom of the system (into the pot), for column distillation the wash is fed into near the top of the system, and steam heats the system from the bottom. Within the still — which is often made from stainless steel but also can be made from copper — there are a series of perforated copper plates at various heights insde the cylindrical and tall still. As the wash flows down over these plates towards the bottom, the steam rises and vaporises the wash. The heavier compounds hit the copper plates and hang back down to the bottom, whereas the lighter compounds make their way out to the top, where they are then colled and recondensed into spirit.

The benefits of column distillation are many, but cheifly economical: because the wash can be continously fed into the system, from the top, you don’t need to stop and reload another batch as you may do with a pot still. You can thus make more spirit at your distillery.

It can also make a lighter spirit, which is what you want when you’re makling vodka, gin, and light rums (it is a hallmark of the Cuban style of rum, for instance).

The stills are also easier to maintain. Because the copper plates are often inside of a stainless steel column, and towards the top, it is easier to replace them. Copper is prone to wear and tear, and with a pot still, as one section of copper wears out, that will shut down the still whilst it is being replaced — which is no easy feat. For the column still, it’s as easy as removing and replacing the plates.

Heating sources
Back in the day — and you’ll see this still be the case for artisanal mezcal production — the stills were heated by lighting a fire beneath them.

Which is all well and good, but technology has got to a place today where we’re a bit more advanced than that. Most distilleries will use controlled steam to heat their stills — whether they’re pot stills or column — and it is easier to control and direct the heat, allowing them to speed up or slow down the process.

The danger with the pot still method — particularly if the heat is not adequately controlled — is that the wash can burn inside the still, which will then require a good deal of cleaning to get rid of the unwanted burnt character.

Hybrid systems
Bourbon is probably the most famous of these. Many bourbons undergo the first distillation in a column still, and then undergo their second distillation in a pot still attached to the column still — also known as a thumper or doubler. The purpose of the doubler or thumper is to bring the spirit up to a higher alcoholic strength. WIth a doubler, the spirit from the column is fed into the pot still; for the thumper it is the vapour that is fed into the pot still.

Bacardi Carta Blanca
Using a column distillation set-up designed in 1862 by Don Facundo and refined over the decades since, Bacardi creates two rums through their column stills — one, the aguardiente, is distilled to a lower proof and brings character and body, and the other, redistilled is distilled to a higher proof. The blend of these two rums is what makes Bacardi, Bacardi.
Bacardi-Martini

Glenmorangie Original
Featuring the tallest stills in the business, Glenmorangie distils a lighter, more delicate spirit (the taller the still, the harder it is for the oilier alcohols to come across).
Moet-Hennessy

Elephant Gin
Not only does this gin do its part for wildlife (a portion of the proceeds go towards elephant conservation efforts in Africa, it’s also distilled in a Holstein copper pot still.
Luxe Wine + Spirits

Bushmills Black Bush Irish Whiskey
Bushmills Black Bush undergoes three distillations and is a blend comprised of 80% malt whiskey and 20% grain whiskey. On the palate‚ it floats across the tongue to deliver dark‚ velvety fruity notes right through to the back of your throat.
Proximo Spirits

Plantation Barbados Five Years
Aside from being simply great rum, this is a great example of blending rums from two distillations processes, as it made with twin column and pot stills, before being aged for 3-4 years in ex bourbon casks and finished for 1-2 years in Pierre Ferrand casks.