Mamie Taylor is not a name you’re likely to forget. But forget it we bartenders did. Taylor was a popular operatic singer and actor in the late 19th and early 20th centuries in the US. It was a popular naming convention at the time to name drinks after stage plays, actors and singers with Mamie being no exception. The drink that bears her name is a tall refreshing blend of Scotch whisky, lime juice and ginger beer.

A popular story about this drink’s creation comes from the March 7, 1902 edition of The Post Standard – a paper based out of Syracuse, NY.

“It was while Miss Taylor was the prima donna of an opera company playing at Ontario Beach, near Rochester, in 1899… she was asked with a number of other members of the company to go out sailing on the lake. As the day was hot and the breeze rather strong, the party returned after a few hours longing for some cooling refreshments. When Miss Taylor was asked what she would have she expressed the wish for a long but not strong drink-in fact, a claret lemonade. When the drink was served it was very evident that it wasn’t a claret lemonade, for it looked like a delicious long drink of sparkling champagne. On tasting it Miss Taylor found it much to her liking, but asked to have the flavor softened with a piece of lemon peel. When this was done the new combination drink was declared a complete success. Bystanders had been watching the proceedings and noticing the evident enjoyment with which Miss Taylor and a few of her friends relished in new drink they finally asked the hotel keeper what drink it was that was being served to them and without hesitation the hotel man replied “a Mamie Taylor”…”

The drink was popular right across the States until Prohibition. Following Repeal, this very refreshing beverage unfortunately never took off again – more the shame. 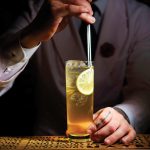 0
Australian Bartender October 17, 2019
No Comments Yet

Aberfeldy – a Highland distillery built by the Dewar family