With the nights getting warmer, all those boozy, stirred down cocktails can get a bit much.

Step in the Rickey. Spirit and mixer, with a hit of lime — it is designed to cool.

It’s an old drink. Its origins date back to Washington DC in the 1880s, a story that Simon McGoram explored in these pages back in 2010:

“The birthplace of the Rickey as a beverage was at a quiet little joint known as Shoemaker’s (Shoo’s for short) on Pennsylvania Avenue in Washington D.C.,” McGoram wrote. “Shoo’s was known for its fine whiskey and politically minded clientele.”

‘Colonel’ Joe Rickey, a Democratic Party lobbyist and Confederate veteran “liked races, played poker, and was a frequenter of more than a few barrooms,” McGoram wrote. The Colonel lent his name and the specs for a combination of whiskey, soda and the juice of half a lime to the bartender at Shoemaker’s.

The drink proved so popular it spread around the country, and would go on to take up other spirits in place of the whiskey, spirits like gin and even vodka. See? Even the Vodka Lime & Soda has pedigree.

Appropriately for these sugar-sceptic times, there’s no sugar here, an absence “explained by the fact that the drink was intended to be a ‘Cooler’ and Rickey himself apparently went around preaching that: ‘Any drink with sugar in it… heats the blood, while the Rickey with its blood-cooling lime juice, is highly beneficial,’” wrote McGoram.

Given the Rickey has been bastardised ever since its birth — the Gin Rickey quickly overtook the popularity of the Colonel’s whiskey original — we’ve made ours with a fine, single malt whisky from Glenmorangie. 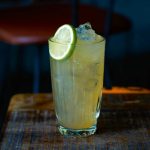 The Rickey is an old drink with pedigree, with its origins dating all the way back to Washington DC in the 1880s.

Glenmorangie Original
This is a 10 year old single malt and an elegant, floral spirit that strikes a balance between sweetness and complexity. Moet Hennessy

Fever-Tree Soda Water
Fever-Tree takes great care (it’s all about the carbonation); their soda water is simple, its ingredients being natural spring water and bicarb of soda. SouthTrade