In the October issue, we speak to Scout Sydney’s Matt Whiley about their drinks list, and he shares a few recipes with us. Whiley is known for an innovative, flavour-driven approach to cocktails, and — as he tells us in the October issue — he has relished the opportunity to work with native Australian botanicals since opening Scout Sydney at the start of this year.

You’ll see some of that approach in this recipe here; lemon myrtle makes an appearance in the recipe, and there’s a fair whack of technique used behind the scenes to turn an often humdrum drink — the Whisky Sour — into an explosion of flavour to remember. 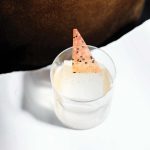 For the hazelnut bourbon, fatwash 1L of Bulleit Bourbon with 250ml of hazelnut oil, freeze, and filter.

For the watermelon vodka, take the fruit of one watermelon and juice. Add equal parts of watermelon juice and Ketel One Vodka together and distil at 55 degrees in a rotary evaporator.
For the lemon myrtle verjus, steep 10g of lemon myrtle in 1L of chardonnay verjus for one hour, then strain and bottle.