In many spirit categories, the blend isn’t the thing that gets the most hype; it’s always the single estate this, the single malt that, the cask selection this. But blending is key to some of the world’s great wines, spirits — vinegars, even. The solera system is one way of doing this and ensuring consistency not just year to year, but over the course of decades.

But it’s not all rosy. When it comes to rum production, there’s some debate to whether the solera system is actually being used by producers who say they are using it, and there’s also some doubt as to its efficacy.

So let’s rack off a little solera knowledge.

What is a solera system?

A solera system is a fractional blending system. What the hell do we mean by that? Well, let’s look at the history of the solera and from whence it came.

The solera is a term that comes out of Jerez at the southern tip of Spain. Jerez, as you may well know, is the home of sherry production, and it is from the production of sherry that we get the solera system.

The sherry solera system ensures consistent across vintages, and adds complexity through a range of wines of many ages. But how does it work?

Usually no more than one third is allowed to be drawn off in any one year, but in practice this is usually a much smaller amount.

This solera style system isn’t used just for sherry, but also in the making of traditional balsamic vinegar from Italy.

In 2000 the European Union granted protected denomination of origin status to traditional balsamic vinegar from Modena, Italy, and with it codified the way it should be made.

That means not all balsamic vinegars are created equal, and the ageing process — in which a solera-style system of fractional blending is used — is one of the key components distinguishing the great stuff (which can cost into the hundreds of dollars for a bottle) from the good stuff.

Don’t let the name the fool you. Brandy de Jerez isn’t necessarily made from grapes grown in the region of Jerez. It is however part of the denomination of origin that the spirit must be aged within Jerez, and aged in a solera system consisting of former sherry casks or butts.

The casks are required to have held sherry in them for a minimum of three years and be between 250 and 600 litres in size, and no more than one third of the barrels can be racked off in any one year, however in practice it is often much less that is racked off.

The solera method is said to be used in a number of Spanish-style rums, having brought over the idea from sherry production. However, our go-to guy for rum, Sugarcane Sunday founder Tom Bulmer, says that there is a lot of chat among rum geeks about whether the solera system in use for rum producers is actually a solera system at all.

“[It] comes down to the difference between whether or not a criaderas system is used,” says Bulmer. “A criaderas is where barrels are stacked on top of each other and interconnected in a triangle pattern so that rum flows from the top barrels into the lower barrels — what John Gakuru used to say at Rum Club is like a waterfall cascading down until finally it reaches the solera (which means soil), where it is removed, vatted, and bottled. It’s a beautiful image. Though, in reality, most Caribbean distillers are just pouring rum between different barrels. So this waterfall seems more of a lake that is pumped into another lake, not so pretty.

“If solera is about just the blending of young [spirit] with old and the use of different barrels then there’s truth in the Caribbean method. But if it’s more widely about use of a criaderas barrel system then shouldn’t the criaderas system be the concept that is protected? If so I think the Spanish could keep it because a criaderas system works amazingly for the wine-based sherry production, but it’s not ideal for a straight spirit like rum.”

That’s because of the climate in which rum is aged in the Carribean, and the way that spirit interacts with oak — because you want the barrel to contribute to the rum the oaky, spice and vanilla characters that come from wood ageing.

“The impact of barrel influence isn’t as essential in sherry where it’s more important to let the grape speak,” says Bulmer.

Then comes the thorny issue of age statements. As Bulmer explains, whereas an English-style rums use the age of the youngest rum in the blend for the age statement on the bottle, some Spanish-style rums do things a little differently.

“Some Spanish rums use an ‘average age’ while some get cheeky and just use the oldest rum in the blend,” says Bulmer.

The idea of fractional blending — the solera system— isn’t unique to Western Europe. In fact, it has been employed in as far afield as Japan, well before it got going in sherry production.

Awamori is a traditional distilled beverage, made from long grain rice fermented with a black koji mould on the southern, tropical island of Okinawa in Japan. It has a long history in the Ryuku islands, going back at least to 1671. And it also used a form of fractional blending, called shitsugi: traditionally, the awamori would be stored in clay urns; the oldest awamori was kept closest to the door, and when some was drawn off for drinking it would be replaced by awamori from the the next oldest awamori in the next urn, and so on. 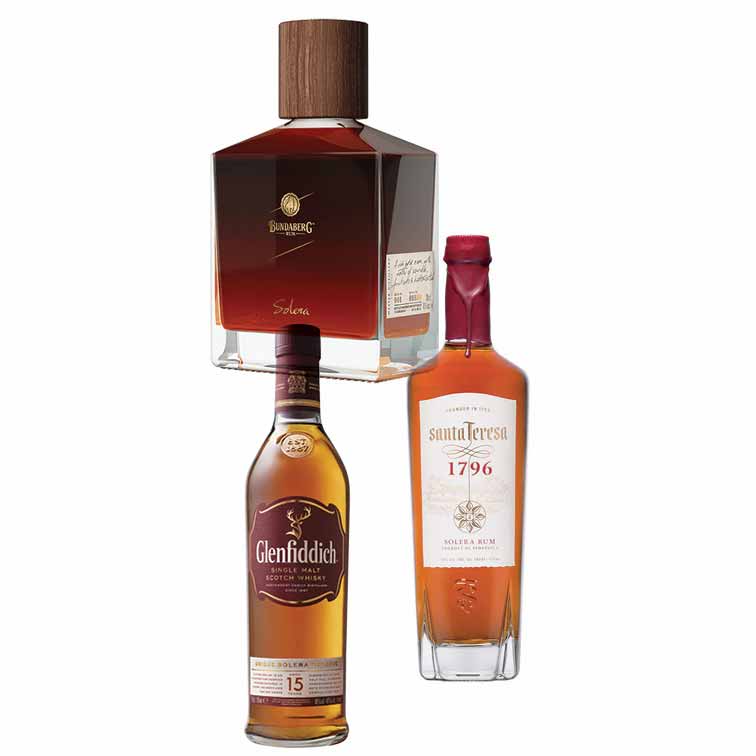 Glenfiddich 15
This dram is kind of solera-adjacent: it is aged for 15 years in ex-bourbon, sherry, and new oak casks before being married in their solera vat, which is always half full with whisky.William Grant & Sons

Bundaberg Rum MDC Solera
This award-winning rum also undergoes a vatting stage; aged in ex-port, bourbon and sherry barrels and married together in a solera vat which is never more than half empty.Diageo