The Cosmopolitan arose from one of the great epochs of vodka: the Eighties. There were many abominable recipes birthed in that period, but the Cosmo — made properly, of course — wasn’t one of them.

And we get the sense out there that the drink is coming back into favour a little bit, and turns out that Sydney bar, Double Deuce Lounge, has their own updated take on the drink made famous by Madonna, Sex In The City, and Dale DeGroff.

But we’ve enjoyed a few — okay, more than a few — of the riff employed at Double Deuce Lounge by bar manager Oliver Churcher, simply titled The Cozmo. It employs a host of native Australian ingredients, and the delicious Marionette Apricot Brandy.

Get a look at the specs below, and should you happen to find yourself at Double Deuce Lounge, ask the guys how co-owner, Sebastian ‘Cosmo’ Soto got his nickname. 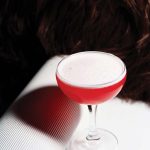