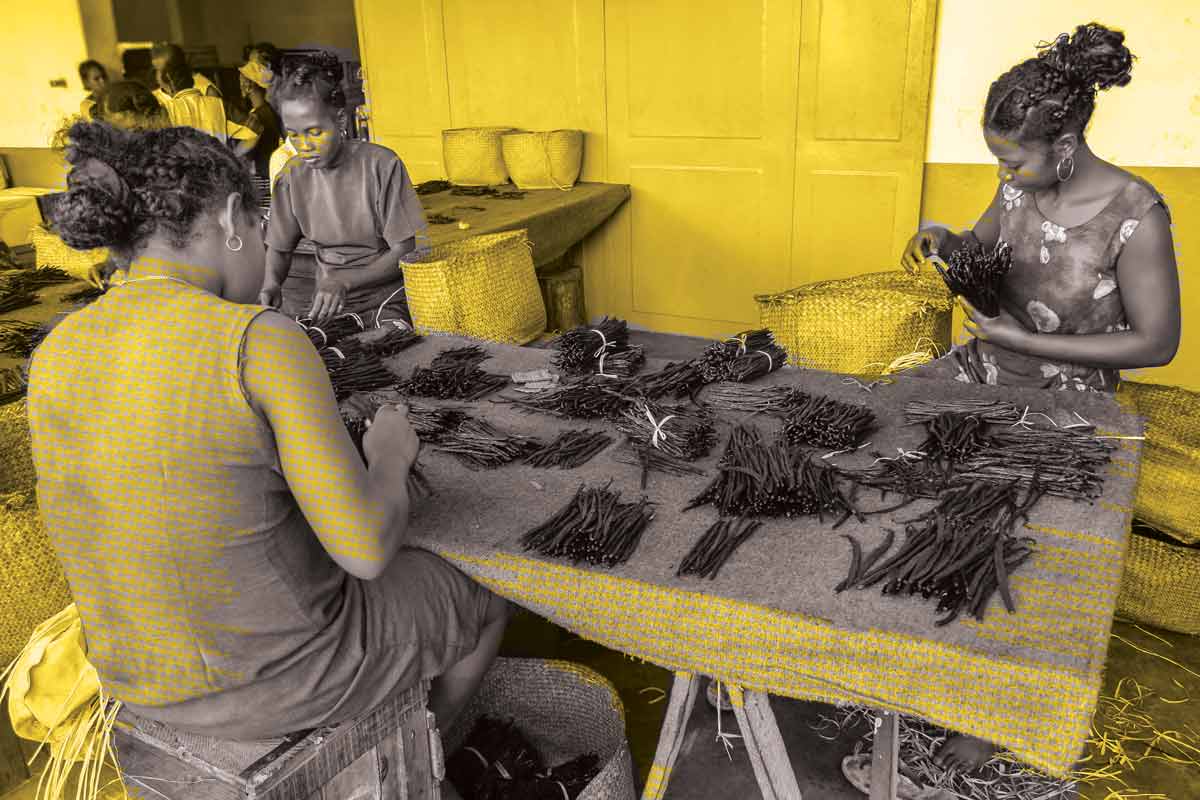 What is vanilla? Despite often being employed as a pejorative term, vanilla is much more than that — the real stuff is one of the world’s most prized spices, and has been used to flavour all manner of beverages (and yes, vodka too). But not all vanilla is vanilla, and vanilla production causes some proper social problems. Let’s take a look at what it’s all about.

Is vanilla really that plain? It is such a popular taste, and one we’re all familiar with — so much so that vanilla gets a bad rap.

Vanilla is a bean that is a member of the orchid flower family, and is indigenous to Mexico — the Mayans and the Aztecs both used the bean to sweeten their chocolatl. Various famous figures in history since then have been credited with popularising the aromatic pod: Queen Victoria took a liking to it, boosting its popularity in England; Thomas Jefferson developed a recipe for vanilla ice cream after discovering it in France.

It is considered the second-most expensive spice after saffron, and that’s down to labour-intensive method of pollinating and harvesting the bean.

The island nation of Madagascar, off the coast of Africa in the Indian Ocean, is the fifth largest island in the world, and it is responsible for somewhere around 80 percent of the world’s supply of vanilla. Vanilla makes up some  20 percent of Madagascan exports to the world.

And the price for vanilla on global markets has gone through the roof in the last couple of years.

Because of this, the Financial Times reported, vigilante groups have sprung up to defend against the crooks and thieves raiding vanilla farms in the middle of the night.

Madagascar, according to the World Bank, is one of the world’s poorest nations with a poverty rate at over 74 percent, and suffers from the fourth-highest rate of malnutrition in the world. They also experience, on average, three cyclones per year.

Farmers typically receive between five and 10 percent of the value of their crops, with middlemen taking the lion’s share.

The high price also means that farmers have a greater incentive to grow vanilla than they do staple crops like rice.

The high price of vanilla has been attributed to the western world’s desire for natural ingredients instead of synthetic flavours, years of drought in Madagascar haven’t helped either, and on March 7 2017, tropical cyclone Enawo hit the island, destroying something in the order of 80 to 90 percent of that year’s vanilla crop.

How vanilla is produced

There is a 24 hour window in which the flower can be pollinated — outside of which, the flower will, as flowers do, wither and die. In its native environment, the flower is pollinated by a Mexican melipona bee (it is thought – there’s some discussion around this point), and on occasion by hummingbirds.

To harvest it commercially — as they do in Madagascar, Tahiti, Indonesia or any other number countries which produce it — requires some deft handiwork, one that resists mechanisation and using a process said to be invented by a 12 year old slave boy in 1841 on Reunion Island. The kid was named Edmond Albius, and he used a small twig and his thumb to rub the pollen from the male anther to the female stigma and voila, pollination and pods cometh.

The vanilla pods will be green when they are harvested, and it takes some knowing and experience to be able to tell when they’re at their optimum — the entire growing and harvesting process can take between two and four years to complete.

Once they are harvested — by hand — they are then sorted and graded before being bleached in hot water.

What to look for?

What makes a good vanilla bean? One test of whether or not you’re getting fresh vanilla bean is to bend it around your finger — if it does that, you’ve got fresh and aromatic vanilla on your hands. If the pod is hard or brittle, then it is stale and won’t give you the full scope of flavour you’re looking for.

But hardly anyone uses the real stuff

Real vanilla from actual vanilla pods only accounts for something like 1 percent of global vanilla use, with the other 99 percent — used in ice creams and yes, some flavoured vodkas — coming from a synthetic vanilla. Synthetic vanilla — you’ll see it in supermarkets as vanilla essence — is often derived from guaiacol, a by-product of petrochemicals, or it can be derived wood-based products; that vanilla character you find in aged bourbons comes from lignin which contains the compound vanillin.

But whilst the synthetic stuff uses vanillin, which is identifiable as vanilla to most everyone, it is one note of the aromas that come from real vanilla, which is considerably more complex — there’s around 250 different aroma compounds involved.

That’s because vanilla is an agricultural product, and like grapes for wine or agave for tequila, where the plant is grown will affect the flavours the pods produce. Indonesian vanilla is said to have a smoky character, whereas Madagascan vanilla and vanilla from Reunion Island has a sweet, rum like character. Tahitian vanilla tends to be more floral, whilst Mexican vanilla is woodier and spicier.

You can get your hands on natural vanilla extract, which uses the real stuff and retains all those wonderful aromatic compounds.

Grey Goose La Vanille
Made using real vanilla from Madagascar, this was first released in 2003 and has come back as a limited release; it is complex in aroma, and made using the finest winter wheat from Picardie as is they way with all grey Goose vodka. Bacardi-Martini

Sailor Jerry Spiced Rum
There’s plenty of intense vanilla character to this spiced rum, along with dry buttery toffee and cinnamon notes on the nose. Cinnamon and nutmeg on the palate along with vanilla, and a long dry finish. William Grant & Sons

Absolut Vanilia
Made using water from a deep well in Arhus, and with winter wheat was its base, Absolut Vanilia was in just about every signature cocktail creation on menus in the noughties, and made using natural vanilla, it has continued to prove popular with the punters. Pernod-Ricard