Recipes
January 13, 2020
by Sam Bygrave
0
Last week we wrote about the Whiskey Apple cocktail at Sydney bar, Double Deuce Lounge; today, we’ve got another delicious sipper from them for you.

The Whiskey Apple, and this drink here — the BabyCham — are great examples of how they take their unpretentious approach to drinking (it’s all about the fun, after all) and apply some back of house techniques to really make the drinks sing.

There’s plenty of work put into these drinks, says bar manager Oliver Churcher; the BabyCham has been on the list since the start, but has evolved in the seven months they’ve been open.

“The BabyCham went through quite a few tweaks because it wasn’t selling quite as well as we hoped,” Churcher says. “We kept the core structure of the drink the same, but just changed it a little bit, and it has worked a lot better.”

But be advised, should you wish to replicate the drink yourself: the clarified corella pear juice is what elevates this drink, and there’s a fair bit of work involved in making it just so.

The results, though, if you persist? Delicious. 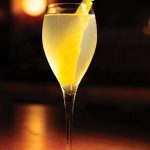 Plenty of work goes into these drinks, says bar manager Oliver Churcher; the BabyCham has been on the list since the start, but has evolved in the seven months they’ve been open.

For the clarified corella pear:
Cut corella pears into quarters, and place 1 teaspoon of ascorbic acid into the liquid receiving container.

Feed Pears through Breville Juicer. As the first juice comes through, stir quickly to dissolve the ascorbic acid.

Once pears have been juiced and have settled for a moment, skim foam from the top using a julep strainer.

Add Pectinase to the pear juice at the ratio of 4 grams per liter, then stir to dissolve. Allow to sit for at least 15 minutes.

Pour the remaining cloudy juice very gently down a barspoon into the cloth bag, being very careful not to disturb the filter layer of pear solids at the bottom of the bag.