Once upon a time — in the early ‘aughts — there was a boom in flavoured vodkas. White spirits ruled the roost. And it’s fair to say that the 2010s saw interest in gin explode and the juniper stuff take its place as the great white hope.

Akvavit — poor old unfashionable caraway spirit that it is — is unlikely to ever reach such heights and dislodge gin from the glasses of the masses, not in Australia anyway. It’s a spirit build for much colder climes than ours. But that doesn’t mean there isn’t a place for more akvavit in our mixing tins.

But what is akvavit?

Akvavit — or aquavit as it is often referred to in English-speaking countries — is an unaged (though not always) spirit with the predominant (though not always) character of caraway or dill or some combination of the two. These two primary characters are also often supported cumin, and any other additional supporting botanicals used can vary wildly.

It often offers more savoury characters than the juniper-citrus-complex of gin, is deeply entwined with the Scandinavian drinking ritual of skål, and has for hundreds of years replaced wine at the table in Sweden, Denmark, and Norway. Savoury spirits and shots — what’s wrong with that?

Akvavit from Denmark, Sweden and Finland can be either aged or unaged, whereas Norwegian akvavit often sees time in used sherry casks. As a result of this sherry cask ageing Norwegian brands like Linie are recommended (by them, at least) to be drunk at room temperature (to be fair, room temperature in Norway might be a little different from Australia).

There is a strong Australian connection with Linie, too: the story of the brand goes that one ship, making its voyage from Norway to Australia and back again, had a misplaced cask of aquavit on board. When they cracked it open again after its long voyage, they found that the heat and the rolling of the ship on the waves had served to improve the character of the aquavit. Today, the same journey is undertaken  – the name Linie being derived from the voyage across the equator line – and the name of the boat it went out on is on the label of every bottle of Linie.

But Norway is just a small producer of akvavit. Denmark is by far the largest producer of the stuff: their Danish Distilleries, which operates a state monopoly on alcohol, produce the Aalborg brand (of which there are just a couple of varieties available in Australia).

When we say it’s unlikely to dislodge gin from its privileged perch in the minds of the public, that’s because the drawback to akvavit is that it can be something of a polarising taste.

The writer and bon vivant Charles H. Baker Jr. didn’t think much of it, describing the stuff as a “clear and potent spirit from the Scandinavian countries, and drunk in tiny thimblefuls, with a toss of the head” which is “practically uncalled-for in mixing.”

But we happen to disagree, as we’ve seen some pretty interesting takes on the cocktail incorporating this savoury spirit; here’s some of our favourite akvavit cocktail recipes from the archives. 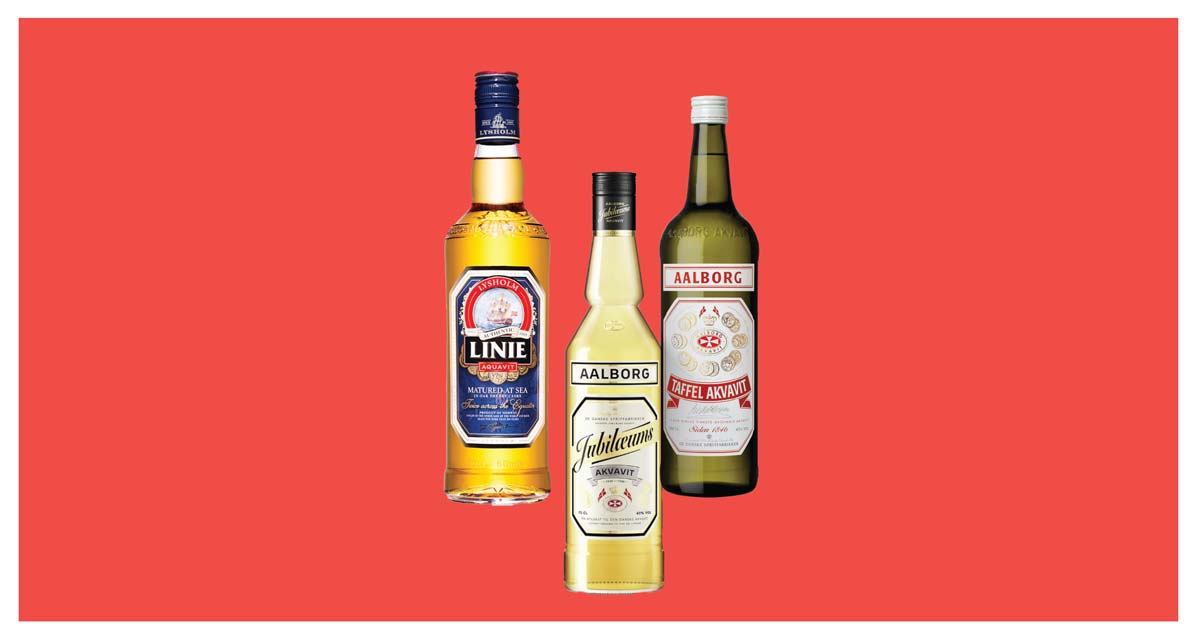 Aalborg Taffel Akvavit
Taffel is a cléar style of akvavit, and this is classic akvavit. Serve it ice cold from the fridge, and it makes the perfect snaps. Straight up caraway, supported by hints of coriander seed. Nicks

Aalborg Jubilæums Akvavit
Dill is most prominent here in this celebratory akvavit. The dill leaps from the glass, and is supported by a cast of coriander, citrus, and anise aromas. Nicks

Linie Aquavit
Using a base of potato, the spirit is aged in oloroso sherry casks and sent across the equator line for ageing — it’s a predominantly caraway spirit with some star anise character to it, and traditionally drunk at room temp. Luxe Wine & Spirits