Pandemic survival means our social spaces are the first to close.

This is not the first time in Australian history that our social spaces have been shut down. It wasn’t something most of us prepared for. Hell, I’d gamble that most of us were unaware that shutting pubs, theatres and other social spaces was a typical government response to a pandemic. I’ve written countless articles over the years – lots of stuff about Prohibition and the six o’clock swill but never about forced closures of our social spaces to enforce a concept known as ‘social distancing’ and ‘flatten the curve’. We have a new lingo. And it’s not something any of us are happy about.

The closest thing we have to look at for a comparison is the Spanish Flu pandemic of 1918/1919 which killed 15,000 Australians and 50 million people worldwide. It was a different time, that’s for sure. Australia, as a nation was in its infancy, was just coming out of a world war and had a population of just five million people. But all our technological, scientific and medical advances over the last century, have still brought the world to its knees in the face of a virus that our human bodies have no way of defeating.

So there are some parallels to be drawn with the way our government in 2020 and the government back in 1918 dealt with the overwhelming chaos of a pandemic.

Just like the governments around the world in 2020, the first step in trying to stem the spread of the flu was quarantine and containment. According to a recent article in the Australian Financial Review, Australia has extensive documentation concerning a remarkable local precedent of contagion containment. The article refers to the work of Peter Hobbins, a medical historian at Sydney University who has made a special study of the 1919 Spanish Influenza outbreak in Australia, based heavily on a royal commission by the NSW government to assess the efficacy of their influenza containment methods. He says that coronavirus is following a “broadly” similar pattern “but in an era of vastly increased government surveillance.”

According to Hobbins, The Spanish flu, was kept at bay for some crucial months in Australia, largely due to extremely tight quarantine restrictions. Just like today there were “massive restrictions on public assembly”, and music halls, schools and Sydney University were closed, and pubs were open for just minutes at a time. Unlike today, people were obliged to wear face masks on public transport or face heavy fines. Interestingly, Australians during Federation were very afraid of contagion spread and lived in fear of a new contagion spreading from neighbouring Asian countries.

In an article about the influenza pandemic from the National Museum of Australia, the first step to stop this slow-moving outbreak hitting Australia was a maritime quarantine which was put in place in October 1918 after outbreaks were reported in New Zealand and South Africa.

While air travel has allowed COVID-19 to spread quickly around the globe, it was the maritime supply lines that allowed the Spanish Flu to reach all corners of the globe:
According to a report by National Museum of Australia, entitled Definining Moments, Influenza Pandemic: “The first infected ship to enter Australian waters was the Mataram, from Singapore, which arrived in Darwin on 18 October 1918. Over the next six months the service intercepted 323 vessels, 174 of which carried the infection. Of the 81,510 people who were checked, 1102 were infected.”

In an eerily similar series of events, the next step was for the federal government to establish a “consistent response” in handling the outbreak around the nation. A national conference was held in Melbourne in late November including various commonwealth leaders and state medical heads. Together they would track infections, input quarantines and each state was responsible for their emergency medical response.

Even with the best efforts however, the wheels fell off, as failures to report infections set state against state. Mistrust was rampant. According to an article in The Guardian, the nation, which was forged on the battlefields of Gallipoli, was crumbling in the face of this contagion. At one point, Victoria allegedly covered up cases of the flu, it spread to NSW, the blame-game commenced and the borders between the two states were shut. It echoes of the whole Ruby Princess Cruise ship blame-game debacle and the premiers of NSW and Victoria both going rogue on national policy.

Just like COVID-19, the number of infections and the severity of the pandemic varied from place to place. And just like today, densely-populated capitals suffered the highest infection and death rates. Sydney seems to be the place that had the strictest enforcements against social gatherings and they suffered three spikes in the outbreak. Just as the death rate was falling, control measures were relaxed and the death toll spiked again.

By the end of 1919, the Spanish Flu outbreak had come to an end. Schools, pubs and churches reopened and the economy started to build again. They couldn’t have known it at the time but they were on the cusp of some of the best years of the 20th century with the Roaring Twenties – an era, of jazz, cars, wealth and booze – just around the corner. Let’s hope the 2020s can bring us the same boom on the flipside of this modern day pandemic. 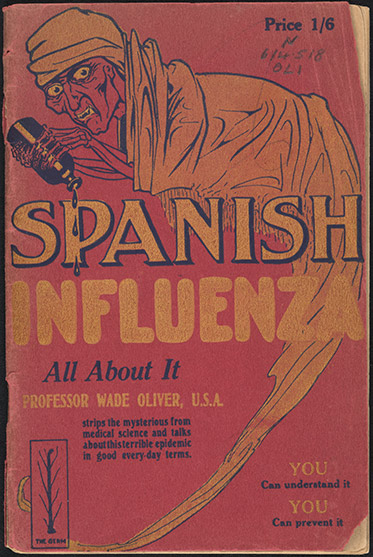 THE SPANISH FLU – the lessons

• Pubs, schools and churches were all closed back in 1919 to ‘flatten the curve’ and prevent the spread of the Spanish flu.

• Pandemics breed mistrust – no one wants to get sick or be the source of an outbreak. So be nice to your neighbours… just keep your social distance.

• Quarantine, travel restrictions and social isolation measures are not new.
Hang in there, this will
all be over soon.