What do bartenders really do? You take the money and serve the drinks, but that’s not everything. You set the lights, light up the jukebox and set the scene. You serve. But it’s not any one of those things alone. And it isn’t the mere sum of those things.

It has become a truism, but bartenders make experiences. And I’m not talking just about the high-end, avant-garde, madeleines moment made by the bars at the pointy end of the World’s 50 Best list. They come in the diviest of places, they happen whenever there is a bartender behind the stick making a drink with a guest in front of them to drink it.
Anyone at home can open a bottle and pour a shot, but it takes a bartender to make it special. I’ve been thinking about this as we — with any luck — head out of the isolation stage of the pandemic, as the punters — again, with any luck — pour back into the bars.

Every bartender I’ve spoken to, when asked about how the way the world drinks will change, believes — hopes — that the public will appreciate what the bars do more now that they know what it is like to not have it. It’s the relationship between punter and spirituous priest. It is what has made my work meaningful to me. The first photoshoot I ran for the magazine was back in the early months of 2013, and featured this guy pictured above, Cristiano Beretta. He made a Ramos Gin Fizz then, and it was the first time we met. We’ve collaborated — by which I mean I’ve mined his experience and knowledge for stories over the years — a number of times. He’s also as fine a bartender as I have met, and has been the host of many a memorable evening. Which of course is what bartenders have been doing since the dawn of the trade.

The Ramos Gin Fizz was invented in 1888 by Henry C. Ramos. Ramos originally billed the drink as The New Orleans Fizz, but it became so popular — it is as delicious as a Fizz can be — it became known as Ramos’ drink. He opened another bar, and is said to have employed some 20-odd staff to shake the drinks so much so that they “nearly shook their arms off, and were still unable to keep up with the demand,” according to Stanley Clisby Arthur’s New Orleans Drinks and How to Mix ‘Em.

Can you imagine what that looked like? What it would have felt like to be there at that time, all those staff, the hubbub of the barroom, the tempest of shaking tins?
I can’t wait for bars to become like that again. A packed room, the frisson in the air, the feeling that something, anything, might happen in the next moment — something that you’ll remember the rest of your life. 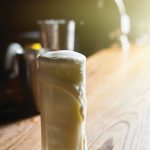 Here are 5 essential Fizz recipes you ought to know