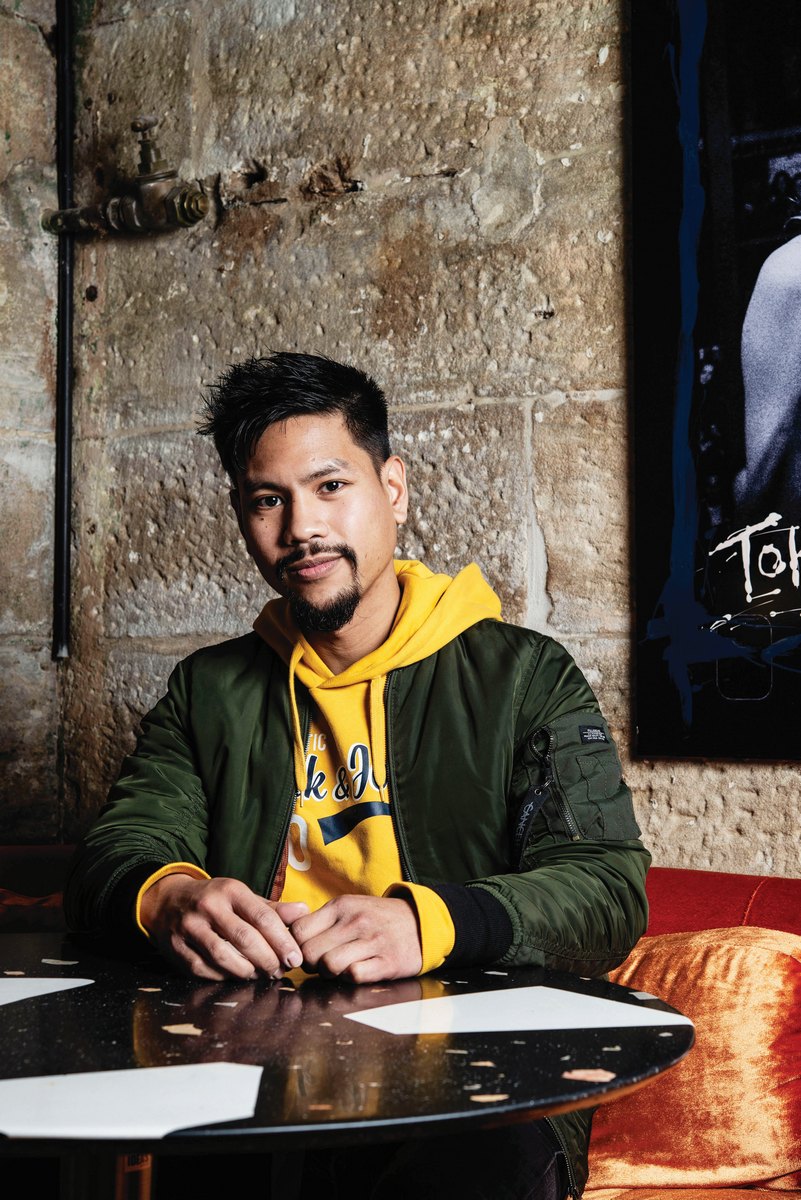 As told to Nick Focareta. Photography by Christopher Pearce

Gerald De Los Santos. He ditched engineering to work in hospo and tells how the
support of Merivale has kept him in the game

I fell into hospitality. I was working a few doors down from Coogee Pavilion when I broke up with my ex, who was my manager at the time. So, when my mate said there’s a job going [at Coogee Pavilion], I jumped on it.

I did some work experience after I finished my engineering degree. I wasn’t really a fan, the whole 6am-2pm lifestyle, there was something missing. I was working the bar once a week and I thought why not give this engineering thing a break and it kind of just went from there. There were venue openings, new responsibilities. Three months became six; I kept telling myself I’d apply for the next graduate intake.

There was a point where I was working in 4 or 5 different venues each week for several months. I like the challenge. The moment you step into a new venue you’re on your toes learning new drinks, new styles of service, meeting new people. I still lived in Coogee when I started working at Bert’s (in Newport) so it was one and a half hours travel each way. My only condition was I couldn’t do any closes, and true to their word, I only did maybe the one in six months.

I’ve been working for Merivale for five and a half years now. I’ve worked at 33 of their 80 odd venues, ranging from rockstar shifts up to a four-and-a-half-year stint. They’re incredibly supportive. If you show initiative, say you want to learn this or that, there’s a system and program in place.

I was born in Saudi Arabia, but my parents are originally from the Philippines. I came to Australia in 2004. It was a struggle to start off with, growing up in the middle east with that culture and having an Asian background, coming to Australia was a shock to the system. I was taught in an American school, so the words and the sense of humour were completely different. cComing from a country with a ban on alcohol to now serving drinks, I love it.

I try to visit the Philippines once a year. After visiting family, the first time, I realised I knew nothing about the place. Now I try and take a different colleague each visit and explore a new island – there’s over 7000 so you’re bound to find something different. I’m a tour guide but a tourist at the same time. I can speak the language and I look like a local, so I always get charged the local price.

When the shutdown began, I had to self-isolate for the first 2 weeks. I’d unknowingly gone to dinner with a confirmed case. After that, I was extremely lucky to secure work packaging hand sanitiser for frontline workers. It was at Otter Craft; they employed a lot of out of work hospo folk during that time.

Right now, I bartend at Fred’s in Paddington. Downstairs is Charlie’s Parker. When it’s really busy, I float between the two. It’s a small team upstairs, there’s only 3 of us. We’re slowly moving towards normal trading hours and even though our capacity has dropped, we’ve been busier than ever. We’re fully booked because I think people are excited to be able to go out again. It’s a good sign for the industry, I hope.

Being part of a restaurant bar has really opened my eyes to food pairings. Trying to normalise this idea of cocktails with food and working in tandem with the chefs to utilise the fresh, seasonal ingredients bartenders wouldn’t usually see. During the bushfires berries were scarce, so we supported the farmers by blanching blackcurrant leaves to create this wonderfully tart citrus replacement.

After a couple of months off, everyone’s hit the floor running. First cocktail back was, I swear, an espresso martini and I’m just trying to remember, how do I even shake this?

Look inside Bar Totti’s, the latest from Merivale

Sam Egerton: ‘The realities of global warming will start impacting the bar industry.’