If gin were a tree, it started out as just a small sapling, which eventually split into two branches. Let’s call these branches gin and genever. This tree stayed like this for quite some time, then all of a sudden branches started popping out all over the place. There’s the fruity branch, the pink branch, the low abv branch, the barrel-aged branch, the limited edition branch.

According to Tristan Stephenson in his book ‘The Curious Bartender’s Gin Palace’, “Gin has reached the most exciting period along what has been, by any standards, a highly tumultuous journey… Gins are now being made in over 30 countries. Botanicals are now foraged, juniper origin and terroir is scrutinised and production processes are laid bare for the benefit of consumer transparency.”

With all these new branches, the question must be, when will it stop? Mike Enright, owner of Sydney gin bar The Barber Shop doesn’t believe we’ve hit saturation point yet but it “can’t simply be a marketing idea,” he says.

New Western Gins
For want of a better term this covers all the gins that, according to Stephenson’s in his book ‘The Curious Bartender’ Gin Palace’ are; “explorations away from juniper and into floral, citrus, spice and fruit.” For Aussie gin brands this means all those wonderful products flavoured with the likes of native pepperberries, Davidsonia Plum, Geraldton wax and the like.

Hendrick’s was really a pioneer in this regard with its cucumber and rose infusions. There are gins coming from Spain with a wine base and almond infusions. Japanese gins which have six unique Japanese botanicals including Sakura Flower, Sakura Leaf, Yuzu Peel, Sencha Tea, Gyokuro Tea and Sansho pepper. Proof & Company now have Peddlers gin which boasts native Chinese botanicals.

Pink Gins
Not a new trend really but one that was borne out of a craze for pink-hued beverages, particularly in London. The pink tone comes from botanicals such as hibiscus, rose petals or rhubarb. Caroline Childerley, the Gin Queen and founder of Ginapalooza, sees pink and flavoured gins as one of the biggest trends, noting how Gordon’s Pink reached a million cases in its first year of launch. “Highlights this year include Coral from Applewood Distillery,” she says. “It’s pink, but really well balanced and not sweet! Never Never Ginache (gin infused with grenache) is super smashable in a spritz.”

This wine element is also becoming quite popular (think Four Pillars Bloody Shiraz), according to Mike Enright. “There are more grape steeped flavoured style gins on the market,” he says. “They are ‘sloe but not sloe’ gins. They’re interesting, generally very tasty, can be a sipping gin and the limited release concept gets the consumer excited.
Charlie Casben from Moya’s Juniper Lounge in Sydney agrees that pink gin has certainly become a thing, for better or worse. “It’s now a far cry from what most bartenders would agree a ‘Pink Gin’ is (or was – basically a short drink of gin and bitters over ice with the colour stained pinkish from the Angostura).”

Casben says the pink gins that have flooded the market in the last five years “are effectively berry infusions, sweetened and marketed as simple mixing drinks for beachy weather, steering dramatically toward the alcopop/RTD genre. It’s a great growth area for the category, but clinging very loosely to any defined use of the word ‘gin’.”

Low alcohol selzers
Low and no calorie drinking has seen a big rise in the category of hard selzers. According to Childerley, two gin brands have already jumped on the bandwagon with this one. “Chase Distillery has launched three – Seville Orange, Pink Grapefruit and London Dry and Lemon with less than 89 calories per can.”

Childerley anticipates more brands will follow this lead. “I am eagerly awaiting to see which Australian gin distiller will be the first to add seltzers to their range,” she says.

Barrel-aged Gins
Genever is often barrel-aged, as was old tom style gin, so it’s not really new. But there are loads of good examples coming out of local distilleries such as Karu and Prohibition, among others. It does add an appealing colour to the gin and open up the category to some other spirit drinkers. According to Casben, this category is creating a bit of a buzz with customers to start experimenting with Gin Old Fashioned and Martinez variants.

“The arguments are also interesting as to the relevance of the category, supporters often suggesting that at a time in history, say the turn of the twentieth century, when cocktail culture was really cementing itself, that all gin making its way to the new world would have been in barrel and thus the greatest cocktails of the era would all have to have been made with some sort of barrel aged gin,” says Casben. “Intellectually it’s an interesting debate, but to some extent who cares? Is it or is it not a good drink? And oftentimes it very much is!”

And what’s next…
It’s difficult to imagine that more branches could continue to sprout from our gin tree. Casben would like to see some clearer definitions around the gin category. “I’d like a little more definition to evolve amongst distillers and consumers about agreed terminology and style rather than the overuse of ‘gin’ as a categorising term oftentimes simply for the sake of marketing and sales.

“Likely however we will see a continuing push into the alternative mish-mash of pink gins and off-brand liqueurs, a trend that is definitely being seen in the awards circles, as time goes on no doubt this will be corrected by the consumer market as their interest stabilises.”

Sampling the range of gins… 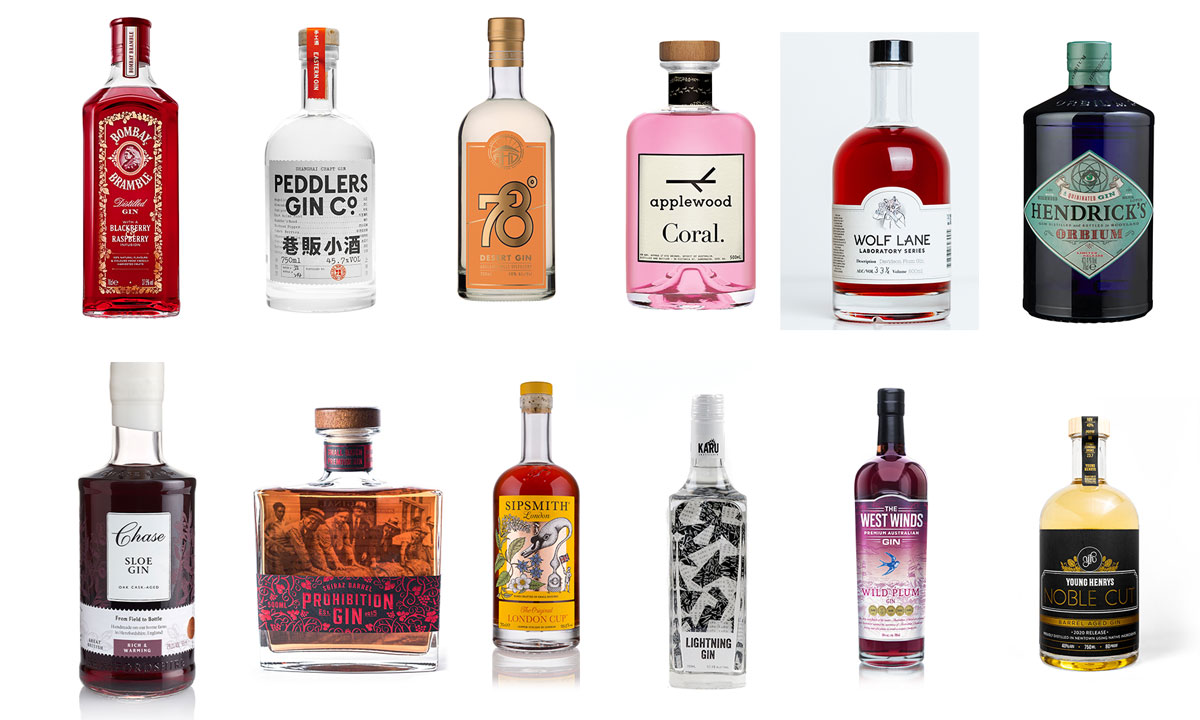 Bombay Bramble
Bombay Bramble is a unique coloured gin, crafted using a fruit infusion with no added sugar, that allows you to control the sweetness of each drink. Crafted with 100% natural flavours from freshly harvested blackberries and raspberries. Bacardi Martini

Applewood Coral Gin
Applewood Coral Gin is a limited release expression inspired by the Great Barrier Reef. Baby pink in colour this delicious gin is made from sweet native strawberry gum with spicy riberries and salty karkalla – a coastal succulent that adds a hit of salinity. Applewood

Hendrick’s Orbium
Hendrick’s Midsummer Solstice is definitely the drink you want for the warmer months. Light, crisp and flirtatiously floral, this small batch limited edition gin is perfect for enjoying day-occasions. Take it to brunch or picnics and celebrate the summer season! William Grant & Sons

Prohibition Shiraz Barrel-aged Gin
This overproof blush coloured spirit is soft and silky with a gentle shiraz note and rich oaked rye back-note. It’s punchy, yet still maintains the vanilla and floral notes which define PLC gins – perfect on ice, with soda or in your favourite cocktail! Prohibition Liquor Co.

Sipsmith London Cup
a refreshing and aromatic gin-based cup, inspired by the ubiquitous punches and cups found in 1800s London. By blending their award-winning London Dry Gin with Earl Grey tea, lemon verbena and borage, Sipsmith have given a traditional drink a touch of Sipsmithian flair. Beam Suntory

Wolf Lane Laboratory Series Davidson Plum Gin
Swaps sloe berries for locally grown Far North Queensland Davidson Plums which are steeped for up to 3 months to produce a truly unique sloe style gin. With an earthy aroma that is reminiscent of plum jam, stewed rhubarb and a touch of sweetness. It makes for a perfect after dinner gin. Wolf Lane Distillery

Love your gin? Get to Made in Britain at Bar Week