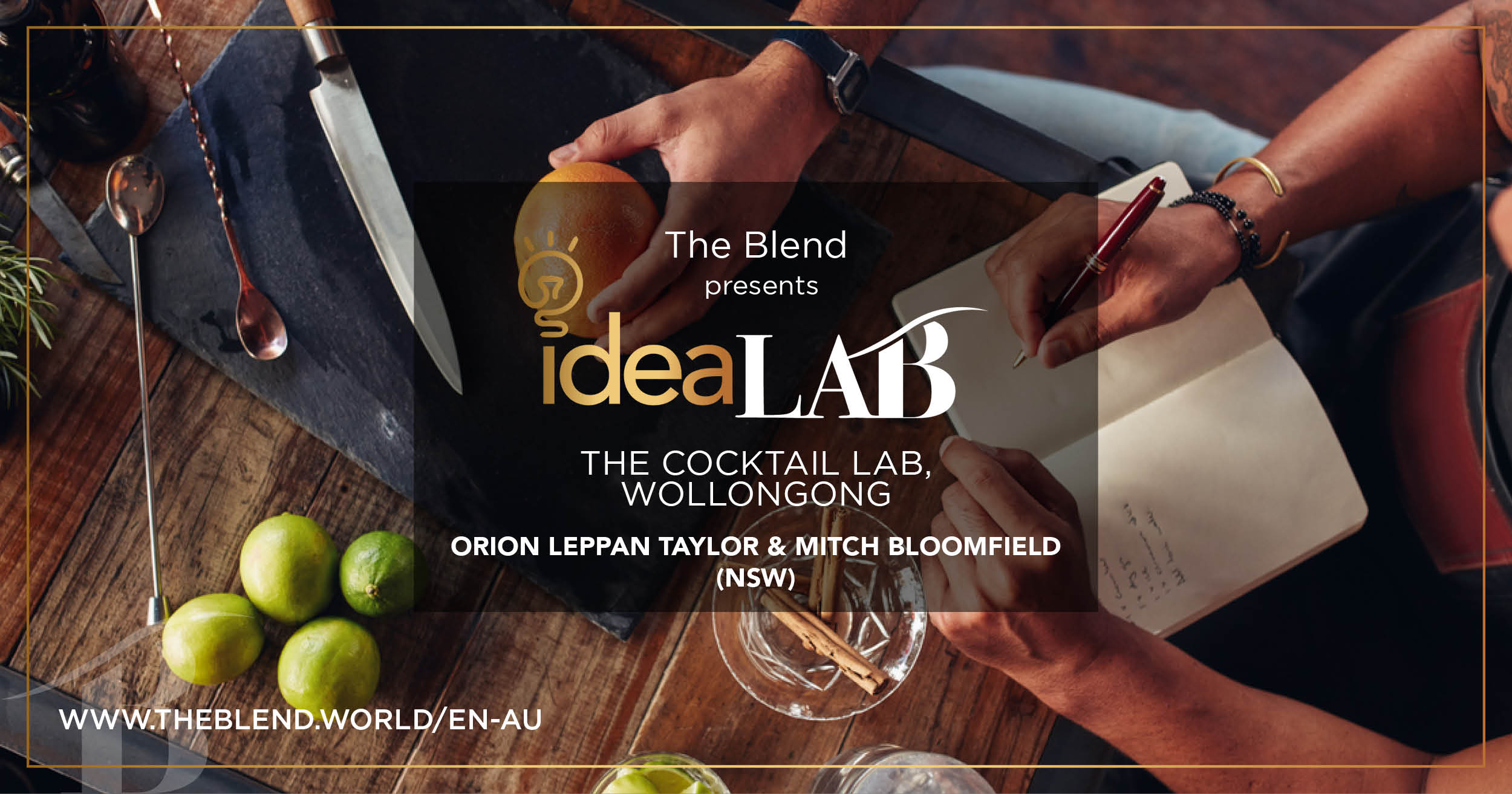 Inside Orion Leppan Taylor & Mitch Bloomfield’s big push to make the Wollongong bar scene the best it can be.

What would you do if you won a $20,000 grant? How would you boost your local community? Bartenders Orion Leppan Taylor and Mitch Bloomfield know what they would do — and they’re doing it. Last year the duo entered the IDEA LAB, by The Blend, winning a $20,000 grant to establish their dream The Cocktail Lab.

“The right drink, the right way, at the right time.”

The IDEA LAB, designed to help support the Australian bartending community rebuild and innovate after the bin fire of 2020, the IDEA LAB put $80,000 in grants up for grabs to bartenders around the country. Nearly 50 entries from individuals, teams and venues were received, before narrowing them down to the 20 best across the country. Each entry underwent a Shark Tank-style pitching process, with six winners announced late last year.

“[The Blend] have been incredibly supportive every step of the way,” says Leppan Taylor, “and are always willing and available to help with anything they can.”

Selected as winners, that’s where the duo — who run things at Wollongong’s Breakout Bar & Escape Rooms — will soon realise their dream of an R&D space, designed for local bartenders to experiment, research and push the envelope.

The big aim? To see the Wollongong bar scene grow together.

“There’s been a ton of growth over the last few years,” says Leppan Taylor.

But as you might expect in a city often overlooked for its larger northern neighbour, there’s a desire among Wollongong’s bartenders to keep improving.

“The sense of community and collaboration has held us strong, even when we had everything on lockdown and were transforming our premises into bottle shops and livestream studios.”

“Being so close to Sydney has given us a bit of an underdog complex, and so there’s a big push for everyone to work together and make the scene the best it can be,” he says.

Along with a space for personal creative exploration for bartenders to access, there will be trade trainings, tastings, and consumer events, The Cocktail Lab will have some fancy kit to play with when it opens in April.

“We’re also investing in some high-end pieces of lab equipment, so that other bars can rent time to use [it], allowing them to incorporate it into their bar programs without having to invest thousands of dollars themselves,” he says.

Proving that passion can be just as powerful as many years behind the stick, The Wollongong Cocktail Lab is an impressive achievement for Leppan Taylor just three years into his bartending career.

“There’s always more to learn, more to explore, more to do,” he says.

Read the full interview online at https://www.theblend.world/en-au/news where Orion, shares why he does what he does, why he’ll probably be a hospitality lifer, and what he hopes The Cocktail Lab will do for local bartenders.

Watch this space, soon to be opening The Cockail Lab Wollongong!

Competition to Clermont winners announced! Two members of The Scholarship Program by The Blend have just won a once in a lifetime trip!

(SKI) PASS TO PARTY with Canadian Club! People of Sydney hospitality, we know you like a good party!

The Blend announces an exciting collaboration with the World’s 50 Best Bars for aspiring bartenders!