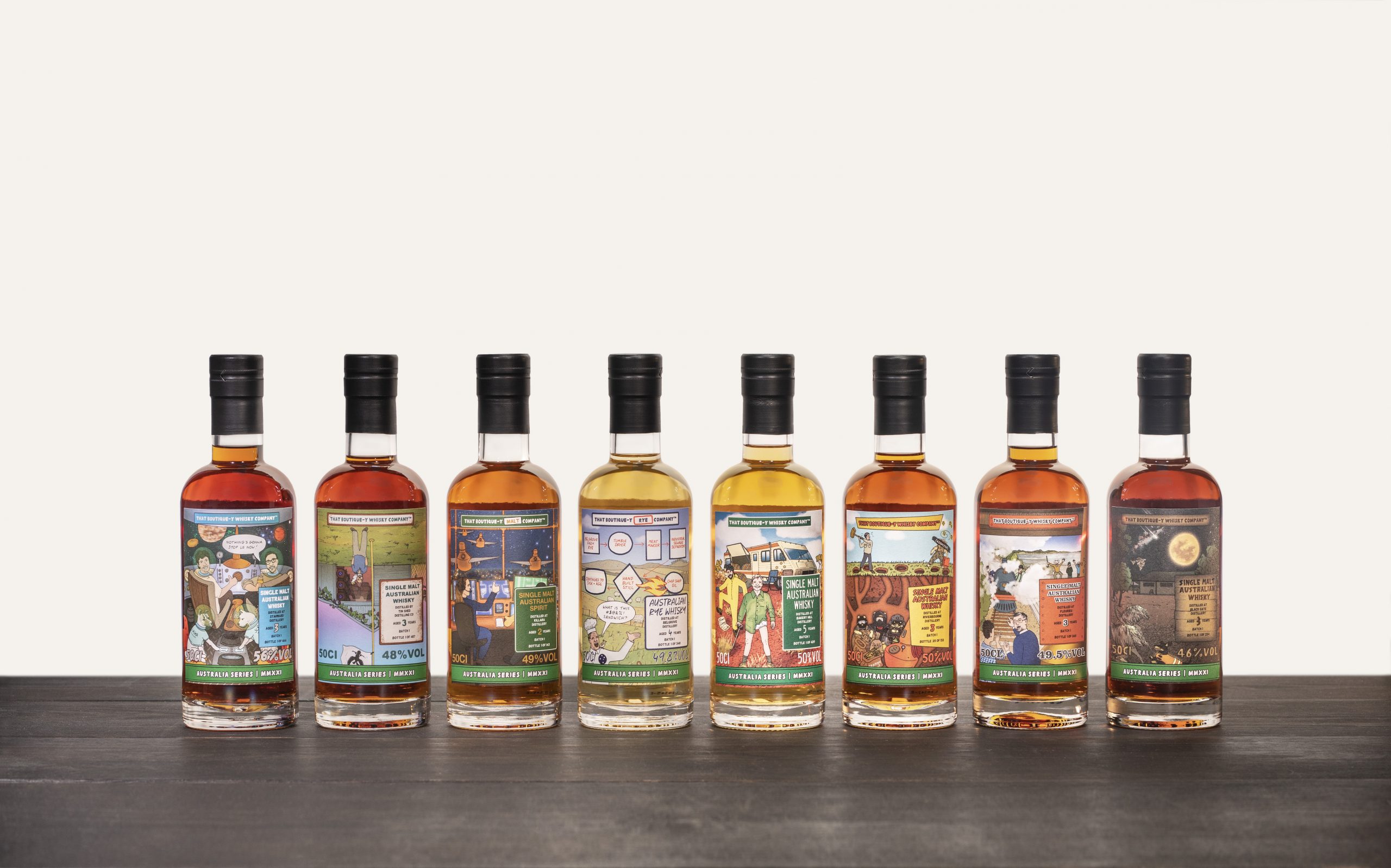 Following the success of their inaugural World Series in August and their World Rye Series in November, That Boutique-y Whisky Company have announced their latest quarterly collection – the Australia Series. An exciting line-up of eight new expressions, this is set to be the brand’s first ever full range of whiskies from Australia.

This latest series sees TBWC continue to expand their world whisky portfolio as they increase their global footprint as an independent bottler. The range which is launching on 23rd April 2021 is also the first series release from a single country the brand has created since shifting strategy to a quarterly focus last year.

Shining a light on the outstanding quality of the liquid coming from these relatively small craft whisky distilleries and making it accessible to a wider audience around the globe has long since been the goal for TBWC, but this is their first foray into showcasing a particular region’s offerings in one release.

Sam Simmons, Head of Whisky at Atom Brands said, “We are so proud, and feel so lucky, that Boutique-y has the respect of peers and pioneers across the whisky world, that we’ve fostered relationships with the flavour makers behind each malt and rye whisky in this Australia Series to be able to put together a range like this.

“Take note of these distillery names, it may be the first time you’ve heard some of them (certainly if you’re not from Australian Shores), but it will not be the last. While I think it’s fair to say that most of the world is just waking up to the fact that Australian whisky is on the map at all, I would dare say that these whiskies, and the future of whiskies from down under, may turn the world upside down. Literally flipping the hegemonic order on its head, with Australia at the top of the pile in the 21st century.”

The series will see bottlings from a collection of highly sought after, small batch craft distilleries, many of which have not previously been available outside of Australia. Included amongst this list is Belgrove, a farm-to-glass distillery run by Peter Bignell, one of the most known and loved faces in Australian whisky. Of the TBWC bottling, Bignell said: “The label is great fun and informative, and I love the ABV they have cut this bottling to. It has highlighted a sweetness which has balanced the typical spicy notes of Belgrove Rye. Australia has developed a flourishing craft distilling industry which has expanded rapidly in the last seven years or so. Keep a watch out for Australia’s passionate distillers who will be releasing many different expressions into the world market in the next few years”

Alongside Belgrove, the release also includes bottlings from Starward, Black Gate (whose total annual output is just 3000L) and Killara, founded by Kristy Lark-Booth – daughter of Bill Lark aka the ‘godfather’ of Australian whisky.

On collaborating with TBWC, Lark-Booth said: “That Boutique-y Whisky Company has fantastic products that are presented to market in a unique and fun way. I love all their different labels and the range of worldwide distilleries that they have on offer and was excited when I was approached to collaborate with them. I am really proud of this bottling, it is the first Killara Whisky that is available to the international market and one of the first 100lt (quarter casks) that were decanted and I especially love the label. There has been a huge rise of popularity in Australian whisky both domestically and internationally and it is exciting to be able to showcase this whisky to the world with Boutique-y.”

Boutique-y Whisky’s podcast Uncorked Whisky Sessions will be releasing an episode in April that explores the new series with Australia’s Drinks Adventures podcast host, James Atkinson. Sister brand That Boutique-y Rum Company are also releasing two rums from Australia to complement the series. The independent bottler will be launching bottlings from Black Gate Distillery as well as an exclusive bottling for the Australian market from Riverbourne Distillery.

The full lineup will be available globally from the 23rd April 2021 and in Australia to the trade via Proof & Company.

For more info head to thatboutiqueywhiskycompany.com or contact your Proof & Company rep.

ecoSPIRITS Forest Program: Save 150g of carbon emissions per cocktail