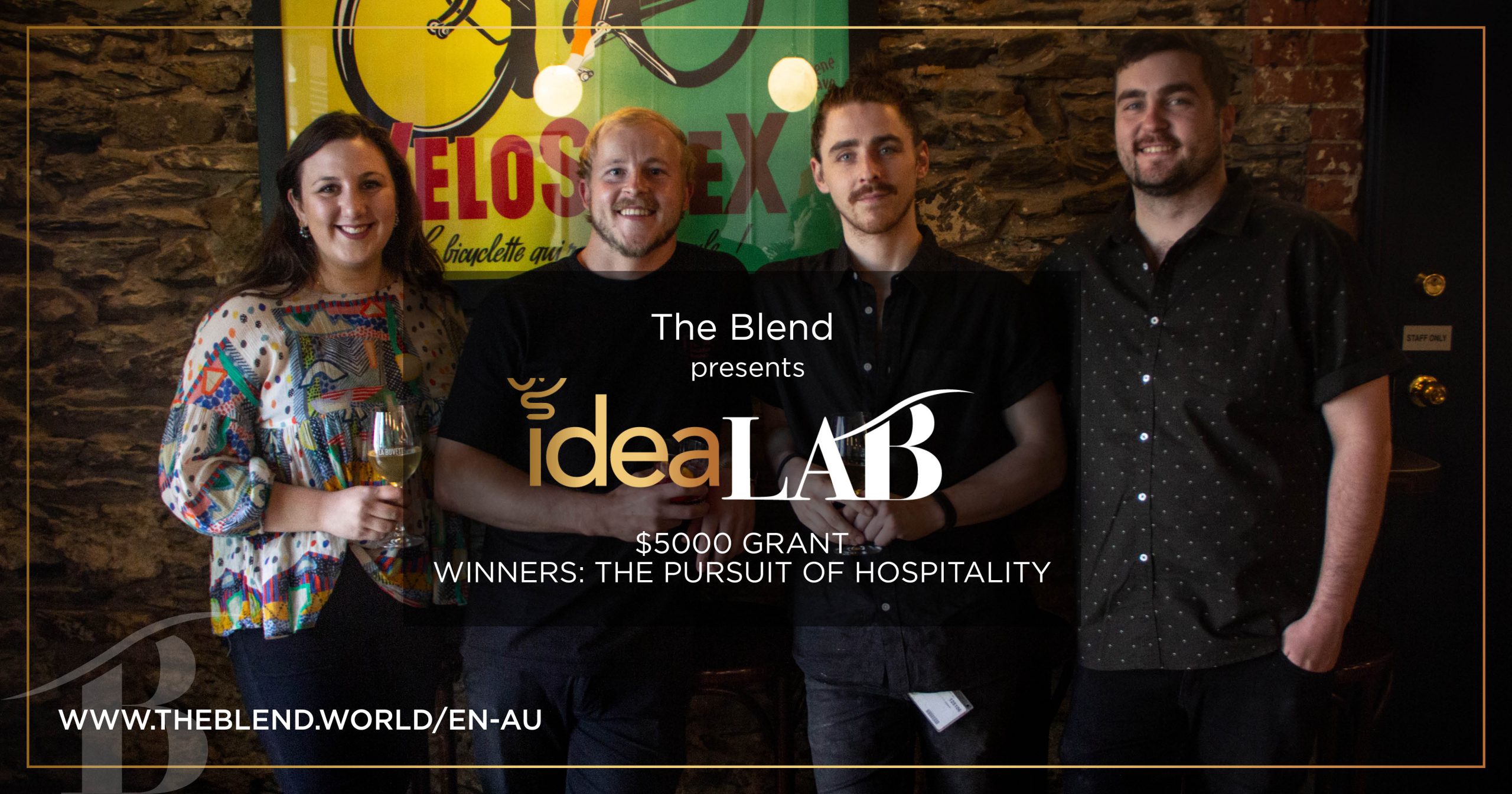 When four Adelaide bartenders saw that The Blend’s IDEA LAB competition was open for entries, they knew they had something worth investing in.

It began with a chat between industry mates Michael Keogh — then the bar manager of the award-winning Maybe Mae — and Sean Howard, who was stewarding the hospo favourite late-night bar, Cry Baby.

“Whenever we were talking about hiring somebody new at Maybe Mae before I left, it was just this massive challenge to find a newbie that was worth investing time into that wasn’t poaching from someone else, because Adelaide is such a small community anyway.”

“Whenever we were talking about hiring somebody new at Maybe Mae before I left, it was just this massive challenge to find a newbie that was worth investing time into that wasn’t poaching from someone else, because Adelaide is such a small community anyway.” – Sean Howard, Cry Baby

Howard shared the same concerns, and naturally, they turned their minds to how they could remedy things.

“We have no doubt there are those newbies out there, but at the moment there’s no way to connect with them — the small bar scene feels like a little bit of a bubble to people on the outside,” says Keogh.

“We wanted to try and find a way to connect with those people and try and find them mentors within the industry.”

They kept talking, and their conversation grew, bringing two more industry mates, Kayla Grigoriou (Bar Torino & Needle&Pin) and Jack Booker (Yiasou George & Anchovy Bandit). Together, they formed The Pursuit of Hospitality winning a $5,000 grant from The Blend’s IDEA LAB competition to turn their vision into reality.

“The Pursuit of Hospitality is effectively a training, community, networking, and advocacy tool for Adelaide,” Keogh says.

Designed to help support the Australian bartending community rebuild and innovate after the bin fire of 2020, the IDEA LAB put $80,000 in grants up for grabs to bartenders around the country. Nearly 50 entries from individuals, teams and venues were received, before narrowing them down to the 20 best across the country. Each entry underwent a Shark Tank-style pitching process, with six winners announced late last year.

The Pursuit of Hospitality is centred around four pillars: training, career, sustainability, and HERd.

“We’ve brought Kayla Grigoriou on from Bar Torino, because she wants to run SA’s answer to Coleman’s Academy,” Keogh says.

“She’s calling it HERd. The reason it came about was to be for a place for women to be heard, and advocacy for women to see hospitality as a career as much as men do, but Kayla’s keen to see it grow to support more minorities — trans, LGBTQ,” he says.

Sustainability is another key pillar that Keogh sees as being part of The Pursuit of Hospitality. One that they intend to build upon the work of The Blend’s of the World training programs throughout the years both digitally and live events that have been hosted on the topic.

“We’re coordinating some trainings on sustainability that should have a fair drawcard, because we’re trying to involve some pretty big names which [The Blend] have worked with before,” he says.

The program will be based around a website which the team are in the process of developing, hoping to prove that from little things big things grow.

“We’re pretty low budget,” says Keogh. “We’ve got this grant from the IDEA LAB — we’re using that to help start up a tiny little website that’s got some kind of networking capability and socials.”

The Pursuit of Hospitality promises to show the benefits of a career in hospitality, and what bartenders can achieve when they get involved. Both Grigoriou and Keogh are long-time participants in The Blend’s training and competition programs.

“I’ve been a part of The Blend a few years in a row, as did Kayla — she did a lot better than I did!” Keogh says.

THE SCHOLARSHIP 2022 REGISTRATIONS ARE CLOSING TONIGHT!

The Scholarship is recruiting!

1 WEEK TO GO! Have you Registered for World Bartender Day Celebrations?