Events, Featured, The Sustainable Bar
3 weeks ago
by Our Sponsors
0 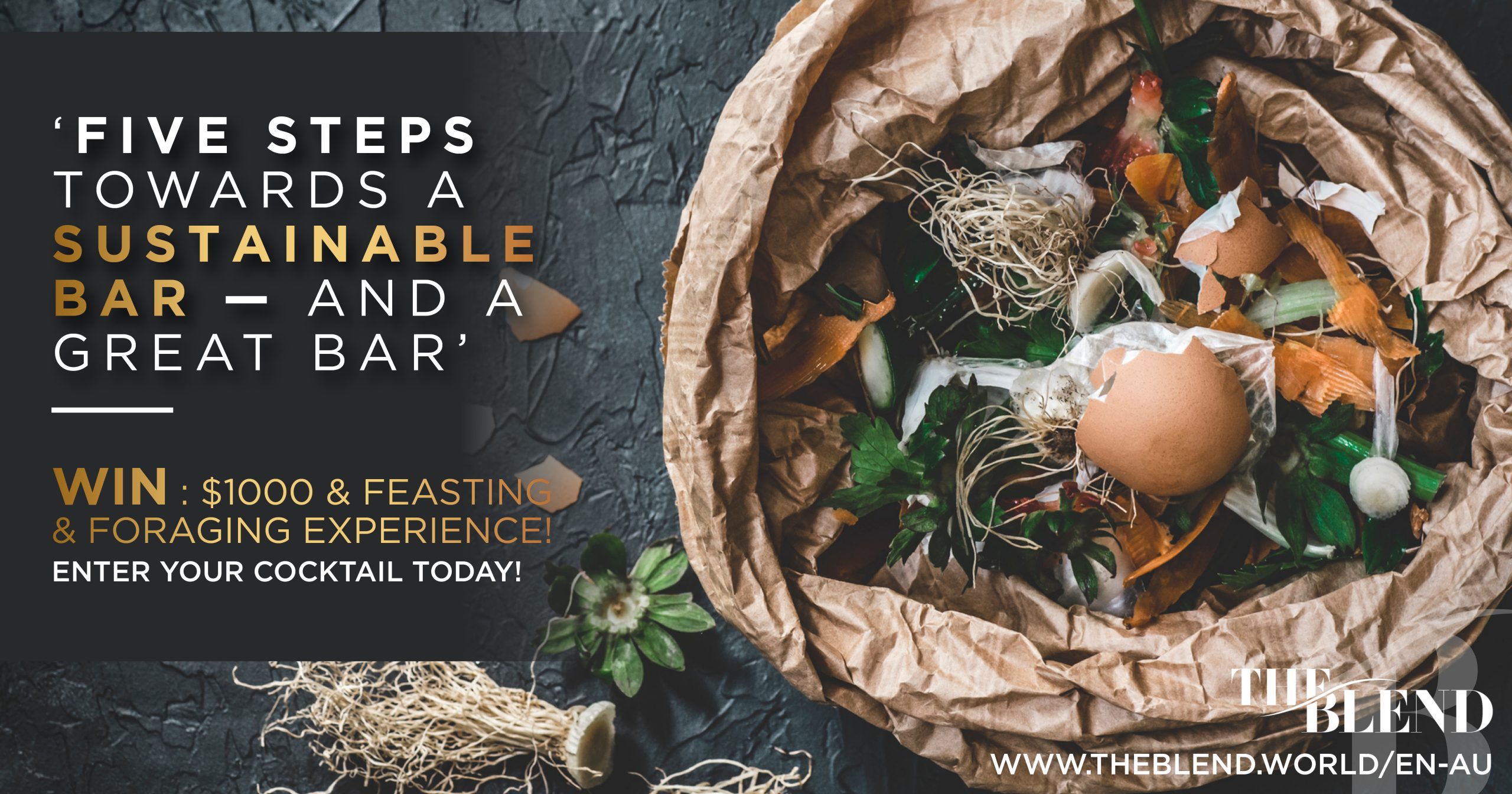 The world’s most sustainable bars are

also some of the world’s best

The bar world has been talking about sustainable practices for the last five years. From early leading lights, like the UK’s White Lyan and Dandelyan to more recent acolytes like SCOUT in London, Native in Singapore, BYRDI in Melbourne and Bulletin Place in Sydney and the newly opened RE in Sydney. They all have something in common: the world’s most sustainable bars are also some of the world’s best.

Why? Because implementing these ideas forces a bar and the bartenders behind it to become more creative. These bars are standard setters, but they’re not practicing some dark art.

There are some clear steps on how you can make your bar more sustainable and, in the process, make it more creative.

Take a look at five steps below.

You need to audit what you throw away. It’s stinky business, sure, but essential to know where your bar’s strengths and weaknesses are.

Collect everything that goes into the bin for one week and at the end of it lay it out (on the ground or open a tarp, let’s not ruin the carpet). Separate it into piles according to type: glass, plastic, other packaging, raw green waste and any other surprises you find in the bin.

‘Collect everything that goes into the bin for one week and at the end of it lay it out (on the ground or open a tarp, let’s not ruin the carpet). Separate it into piles according to type: glass, plastic, other packaging, raw green waste and any other surprises you find in the bin.’

Count it all up and you should be able to work out some rough percentages on what’s going to waste. You might find that that’s where all the pairing knives are going while you’re at it.

Now that you know what you’re wasting, you can do something about it.

The simplest and most effective method to get you on your way to a more sustainable bar? Reducing what you use a lot.

Which waste items can you reduce?

Bottles for beer and wine — you might want to keg those if that’s possible. If you’re using a lot of soft drink bottles, think about a post-mix solution. Substitute what you can where you can with the aim of putting less stuff in the bin.

Produce packaging clogging up your bin? If your bar has the space, a cocktail garden‚ even a small one‚ will reduce the amount of packaging you need and produce you order in!

This is a crucial point, because anything you can do to reduce your produce waste helps to reduce your environmental footprint. According to OzHarvest, if the emissions from the world’s food waste in landfill was a country it would rank third behind the USA and China as the largest greenhouse gas emitters.

Some 8% of the globe’s greenhouse gases are caused by food waste, and if we are able to eliminate global food waste, it would have the benefit equivalent to taking 1 in every 4 cars off the road.

OzHarvest also suggests that if we were to save 1/3 of all food lost or wasted, it would easily be able to feed the nearly 800 million people who are undernourished. A staggering thought when you consider that almost half of the fruit and vegetables that are produced are either lost or wasted.

Lastly, talk to your produce suppliers about getting your goods in less packaging — it might save them money too.

The benefits are many: there’s less handling of those items, resulting in more time for your staff and a reduction in your waste collection rates for the bar owner.

“What people don’t understand is that if we eliminate food waste, we eliminate the third biggest reason for climate change” she says. “The campaign is asking people to just make a tiny change in their life [to the way they manage their food waste] because the impact is so important.”

The Federal Government’s National Food Waste Baseline 2019 report reveals Australia is wasting over 7 million tons of food each year, which equates to 298kg of food per person, making Australia the world’s fourth-highest food waster per capital.

Charlie Parker’s has found a way to close the loop and growing their own cocktail garden. In the Growing Drinks in the Modern Bar series, Sam Egerton and Giacomo Franceschi demonstrate composting and how simple it is to not waste your waste!

Here’s where you can employ some creativity and take some inspiration from bars and bartenders at the forefront of the cocktail world.

At Charlie Parker’s, they take the piths and skins from lemons discarded from the juice making process, and use them to make an oleo-saccharum which is then used to make an in-house lemonade that is dispensed through a tap system.

Penicillin in Hong Kong is owned by the award-winning and high-flying bartender, Agung Prabowo, and is another example of a bar tackling the zero-waste challenge. For them, this might mean taking discarded banana skins and putting them through a rotary evaporator to create a banana skin whisky, which goes into the cocktails they serve over the bar. Their bottle labels are made using waste ingredients from the bar and recycled paper. Leftover fruit will also find its way into the bar’s organic ferments list.

Native in Singapore, a regular fixture on the World’s 50 Best Bars List, is so well known for its reduce and reuse techniques that they have reduced their nightly waste down to little more than would fill a small waste paper basket — and most of that is rubbish brought into the bar by their guests.

The key here is to think hard about the ingredients you use and how you can wring the maximum amount of flavour from parts of plants you might not otherwise think to use.

Recycling is a crucial aspect of any attempts at getting more sustainable, but it isn’t the panacea you think it is. Sure, there are avenues for recycling some plastics, but much of it isn’t suitable for recycling.

The Royal Statistical Society’s statistic of the Year in 2018 was a doozy: 90.5%. That’s the percentage of all plastics that have never, ever been recycled. They went on to say that another approximately 12% of plastics have been incinerated, whilst the rest of it, some 79% or so, has been put into landfill.

Just think about that: plastic is built to endure, which means it will be sitting in landfill and, worse, our oceans, for a long time. The WWF Australia estimates that a plastic bag can take around 20 years to decompose, and even then, breaking up into smaller and smaller pieces. Those disposable coffee pods? They’ll be in landfill for 500 years or more.

‘Just think about that: plastic is built to endure, which means it will be sitting in landfill and, worse, our oceans, for a long time. The WWF Australia estimates that a plastic bag can take around 20 years to decompose, and even then, breaking up into smaller and smaller pieces. Those disposable coffee pods? They’ll be in landfill for 500 years or more.’

So, the goal here is to avoid plastic where you can, and when you can’t, make sure it doesn’t go to landfill.

It means that if you can use recycled goods instead of new goods, particularly plastics, then do it. RE is the soon to open bar from Matt Whiley in Sydney, and reusing and repurposing is at the very core of the bar’s vision. Their banquettes will be upholstered in a leather made from pineapple leaf fibre from the Philippines and their coasters made from recycled plastics from a Sydney-based plastics recycling micro-firm called Defy Design.

Bartenders love to think about designing their own bar — the worktops, foot-activated taps, everything designed for the efficient movement of a bartender behind the stick. But reimagining the design of a bar is also a crucial step in reducing its environmental footprint.

There are the big things to consider, like a bar’s energy consumption, that can be affected by little things like the quality of the door seal on your refrigerators.

You can set your bar up to make sorting and recycling waste simpler. The National Food Waste Baseline suggests that simple “design efficiencies help improve diversion, such as the capacity to wipe down benches into a food waste compartment, rather than having to walk to the bin.” (Arcadis, 2019)

The benefits are plain: reducing a bar’s environmental footprint can save money. But it can also result in a more creative bar, one worthy of joining the ranks of some of the world’s best.

If you’re keen to get started, enter The Blend’s Garden to Glass Cocktail Competition for your chance to win a unique feasting and foraging experience for two and $1,000 in spending money.

All you’ve got to do is head to The Blend website, watch Growing Drinks In The Modern Bar and take some notes.

Next, use either sage or mint and use what you’ve learned from the videos in the series to create a cocktail. Click here for more details.

If you’re successful, you may be one of three winners, each receiving a two-night stay in your state with a mate, taking part in a unique feasting and foraging experience and spending that $1,000.

Visit The Blend for more.

WIN 1 of 5 Beam Suntory Prize Packs! All you need to do is speak your mind. Easy!

The Blend is giving away individual LIFE COACHING sessions to 5 bartenders!

Let’s get physical with The Blend’s Step Up Challenge

The Blend launches B Healthy: A platform for the trade to move and shake in a different way!

The IDEA LAB finalists are revealed!