Never Never Distilling Co. are launching a new incentive across Australia that aims to put the humble cocktail onion in every bar that ranges a Never Never martini.

It comes off the back of the distillery’s exciting new collaboration with South Australian food icon Spring Gully Foods. The brands have come together to create Australia’s first commercially available Botanical Cocktail Onions, flavoured with the same botanicals that go into Never Never’s award-winning Triple Juniper Gin.

Each jar contains not only Spring Gully’s famous pearl cocktail onions but also fresh juniper, coriander seed, angelica root and Australian pepperberry, the quartet that make up the base note in their gin.

“It’s a very rare day that you ever get to talk about an onion collaboration” says Co-Founder and Brand Director at Never Never Distilling Co. Sean Baxter.

“Spring Gully have been the home of the pickled onion since they first started producing them back in 1946, so when it comes to pickled onions, few can compete with the flavour, texture and heritage,” says Baxter. “I certainly should know, I’ve been drinking Gibson Martinis pretty much since I knew they were a thing,” he says.

In the lead up to World Martini day on the 19th of June, Never Never are launching ‘Jars for Bars’, an incentive to say thanks to those supporters who have been peddling Never Never martinis since their inception.

Those venues across Australia that range Never Never gin as a martini option will receive a 1kg jar of the Botanical Cocktail Onions for free, such is the brand’s ambition to spread the word on the tasty garnish.

“In my opinion the humble cocktail onion is one of the world’s tastiest martini garnishes,” says Baxter. “However, for whatever reason, it can sometimes be hard to find a bar that always has them in stock.”

“We here at Never Never Distilling Co. always want to ensure that wherever we go in the country, we can drink at a bar that stocks Never Never Spring Gully cocktail onions,” he says.

“I mean, that’s why they are called cocktail onions, they belong behind the bar, not just rolling off the occasional cheese board.”

“So if you already range a Never Never Gibson Martini or would consider it, we will personally supply the venue with the cocktail onions required to complete the famous duo,” Baxter says.

“This is about taking two incredible South Australian products and putting them in every cocktail bar in the country,” says Baxter.

“The jar contains a few hundred martini serves,” says Baxter, “or about two to three adequate staff meals when you miss your dinner break on a Friday”, he continues.

Spring Gully were largely unaware of the cocktail onion’s popularity when it came to its use as a martini garnish, mainly associating it as the third wheel of the famous trio of kabana, cheese and onion. This is something that has been quickly rectified through extensive taste trials internally.

“We’re very excited to be collaborating with such a fantastic, innovative South Australian brand in Never Never Distilling Co,” says Keetah Murphy, Sales & Marketing Manager at Spring Gully Foods. “When they approached us to work on the development of this product we jumped at the opportunity to be able to give one of our classic favourites a modern spin!”

‘Those venues across Australia that range Never Never gin as a martini option will receive a 1kg jar of the Botanical Cocktail Onions for free, such is the brand’s ambition to spread the word on the tasty garnish.’

The Gibson Martini, like most classic cocktails, has a myriad of origin stories, however the most colourful was that it was named after the New York socialites the Gibson Girls, made famous by a risqué series of pen and ink drawings by Charles Dana Gibson in the early 1900’s.

It was risqué because the two cocktail onions adorning the drink were supposedly representative of the ample cleavage of the illustrated glamour models.

The cocktail onion is also commonly found adorning a Bloody Mary or Red Snapper and sometimes even a savoury twist in a fruit cup. However it’s the Gibson Martini that has made it world famous.

Regardless of the drink’s heritage, the Gibson Martini has seen a resurgence thanks to spirited purveyors and brands who appreciate its bright savoury flavour.

Marcus Motteram owner of the world renowned Hains & Co cocktail bar has been a huge supporter of Spring Gully since 2013, when the company was pushed to the brink of financial collapse.

“I’d like to think we sold enough Gibson martinis to keep them afloat,” Motteram says, “they are a South Australian icon, an institution, it would have been an incredible tragedy to see such an important local business go under.”

“When I heard that Never Never were collaborating to create a botanical onion with the great folks at Spring Gully, I jumped at the chance to be involved,” he says. “I love what both these brands represent and I love it even more when it materialises into the best damn martini I’ve ever tasted,” Motteram says.

If you would like to be a part of the ‘Jars for Bars’ incentive and receive your supply of the Spring Gully Botanical Cocktail Onions, please reach out to your local Proof & Co representative at ordersau@proofandcompany.com or get in touch with the Never Never team for assistance.

Launched in August 2017, Never Never Distilling Co. is built on bold decisions and a fearless spirit. It was founded by three friends with the passion and drive to produce Australia’s greatest gins. We thirst for more, not just in the spirits we make but lives we lead. 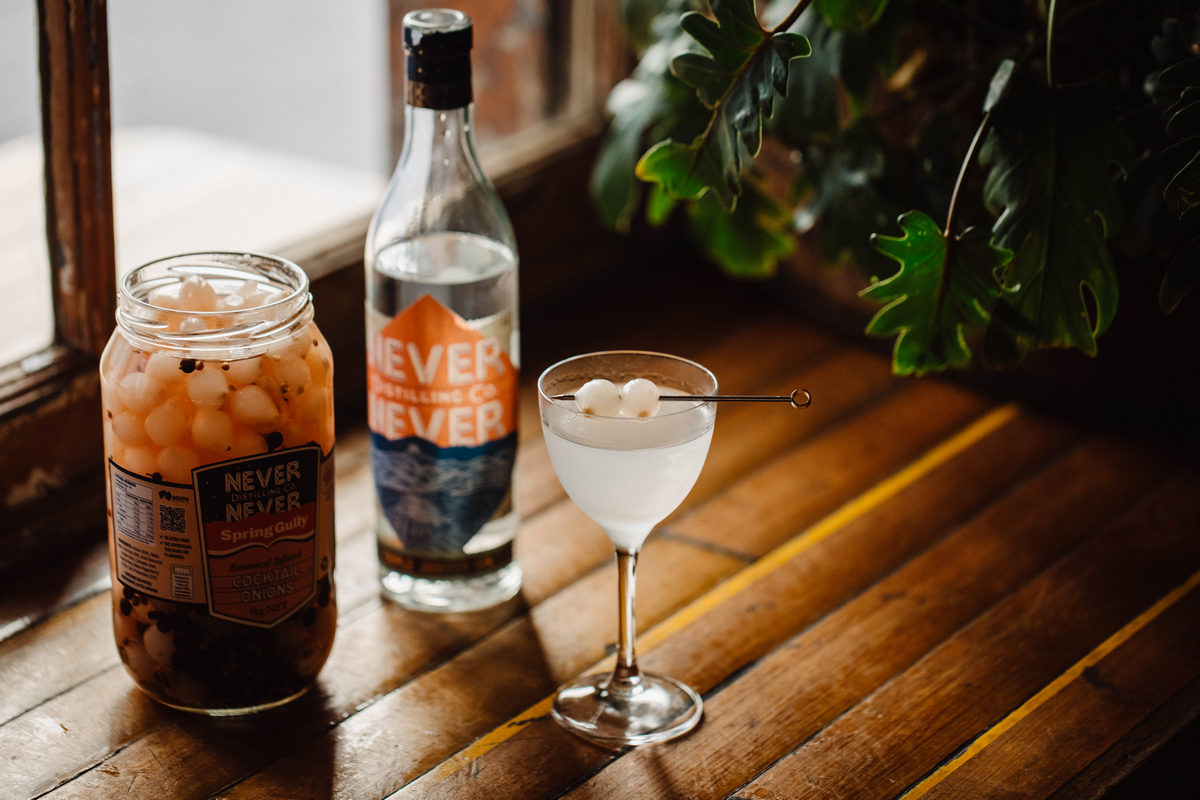