The story of our rum finish whiskies at William Grant & Sons might come in different shapes and sizes (as many great stories do) but what you will read below is not only the real story but proof that doing things the hard way just has to be done sometimes.

Cask finishing is one of my loves in learning. A technique pioneered by our Balvenie Malt Master David Stewart, it has become a classic style globally and is a big reason he was awarded his MBE from The Queen – it changed the world of whisky. But I don’t think there is enough understanding on what it really is. There are 3 ways in which cask finishing works but the one that impacts our rum finish whiskies is when the oak barrel we finish in is influenced itself by its first liquid (rum in this case) and the oak changes before it goes on to impart flavour in the whisky which differs to the liquid itself influencing the whisky.

Our story begins when David Stewart created The Balvenie Classic in 1983, a European oak Oloroso sherry finish and the first cask finish whisky ever released. In the years that followed David went down the path of trying all sorts of finishes. As I stood learning this story from David in his Sampling Room in Glasgow, he told me: “We just decided to try all sorts of finishes. Ordering a half dozen barrels of anything we could think of, Cognac, Armagnac, wines, sherries and rum. We just wanted to see how they all worked. Some of them didn’t work as well but one that stood out was always the rum finish.” 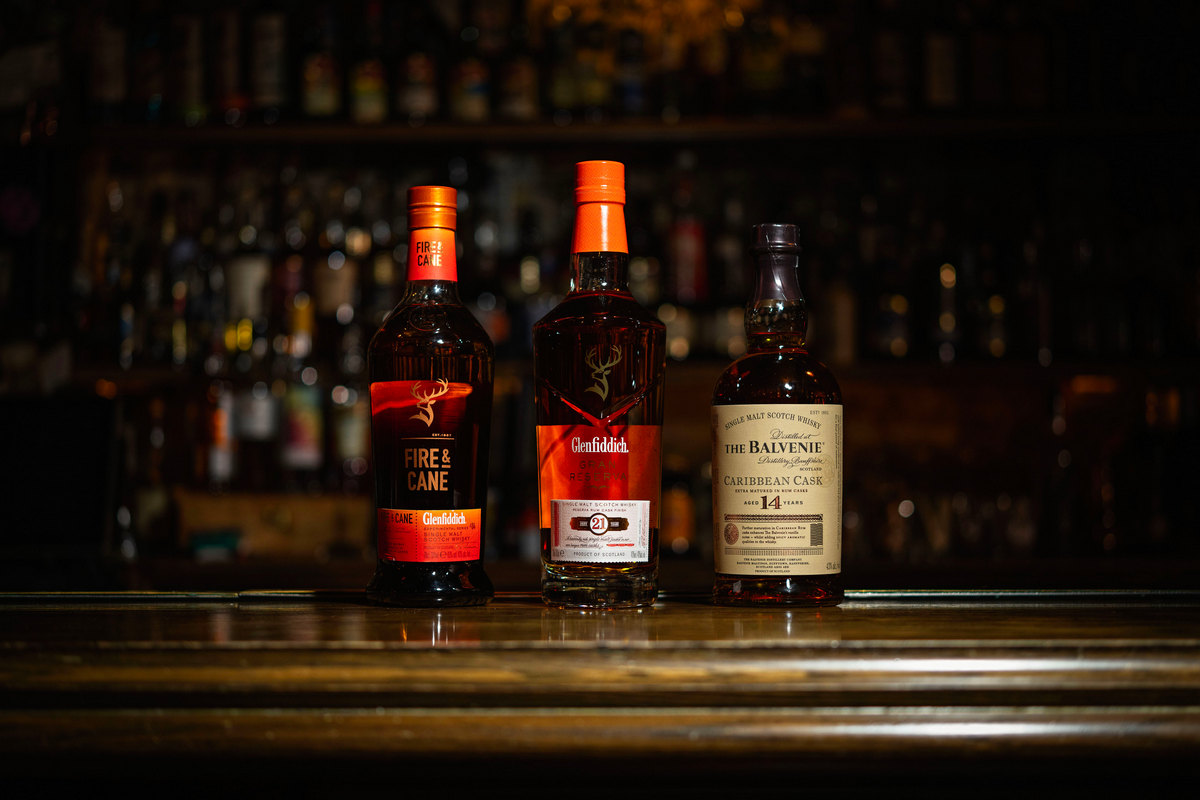 With the knowledge that rum finishes were so bloody delicious David just waited for the right time to use it. At the start of the 2000’s a conversation happened that would change the course of our cask finishing history forever. Our Glenfiddich global brand team had a chat with David about an idea they had for using some Cuban rum barrels and maybe whisky and cigars could work alongside. Great idea. David already knew what he could do so he took a 21-year-old Glenfiddich, finished it in some Cuban rum barrels and after 3 to 6 months he pulled out some seriously exceptional liquid. I think the whole team knew he was onto something special. What developed into our Glenfiddich 21 Gran Reserva was born.

“We don’t have many scotches at Lobo but we always have The Caribbean Cask. It’s always been a favourite of mine and it just ties so well to us being finished in rum casks.” – Chloe Natterer, The Lobo, Sydney

Five years went past without any more rum finishes…was all the rum gone? No, just waiting for the right time and the right whisky. David told me that he had a soft spot for Balvenie in rum barrels. The full flavour, the balanced yet bold molasses and toffee, the delicate fruit and oak could really heighten what Balvenie already had in its DNA. In 2006 we released the first of 4 limited release rum finish whiskies, The Balvenie 14 RumWood finished in Guyana and Venezuelan rum barrels. Then came The Balvenie 17 Rum Cask finished in some incredibly old Jamaican rum barrels which David actually came across while on holiday with his family but that’s another story altogether. Followed closely in 2009 by The Balvenie 14 Cuban Selection finished in…well I’ll leave it to you to guess that one. And the last of the limited releases was The Balvenie 14 Golden Cask in 2011 before our beloved bartender favourite came out in 2014 the Caribbean Cask 14. Each of these is aged for the number of years on the label in traditional whisky barrels before its finish time in rum usually 3 to 6 months.

All these rum finish whiskies! They are exceedingly rare now but keep an eye out, they’re delicious! Most of these releases up to the release of the Caribbean Cask in 2014 were finished in barrels we never had full control of, they were bought in from the rum distilleries mostly, so consistency was a problem. Here is where I really started getting lost in the world of rum finishes at William Grant & Sons.

To make a really good consistent rum finish whisky David Stewart, Brian Kinsman (Glenfiddich malt master) and Kelsey McKechnie (apprentice malt master) now create their own blend of rum to get the exact flavour they want in it. They blend using young Caribbean rums and take it to Dufftown, Speyside where The Balvenie and Glenfiddich are, and they season ex bourbon barrels with the rum. The barrels are seasoned in our warehouse for 6 months with the rum before our whisky goes in there for its finishing time. In that 6 months the rum interacts with the American oak, it changes the flavour that comes out of each stave and that is what brings the heightened complexity and flavour to the Glenfiddich or Balvenie that goes in afterwards.

“Often people think the flavour of the whisky comes from the rum itself and we know that’s not the case. It’s the effect the rum has on the oak that changes the flavour of the whisky” Kelsey told me when we first chatted about this in-depth last January.
If the work involved in creating this rum, moving it, seasoning, removing and filling again wasn’t enough David, Brian and Kelsey create a different blend of rum for each of our whiskies finished in rum barrels. So, a different rum blend for Glenfiddich 21 Gran Reserva, The Balvenie 14 Caribbean cask, Glenfiddich Fire and Cane, Tullamore DEW XO and Grants rum finish. I’m still honestly just amazed at this. So much work goes into these whiskies! But that’s not even it and I’m literally standing to type the rest because I’m too excited!

After we use the rum a few times its flavour changes and it picks up character from the oak too. So, the rum isn’t going to influence the oak in the same way, so what do we do? Kelsey walked me through how this last part works and blew my mind. Because these releases are so popular, we always need more rum and more barrels to finish in. So, when the rum gets too much oak influence Kelsey and the team get more young rum and blend it in with the older stuff to get it to the right flavour. Pretty much like a solera system. Seriously, this is an insane amount of work, time, passion, and love that goes into getting these whiskies just right. 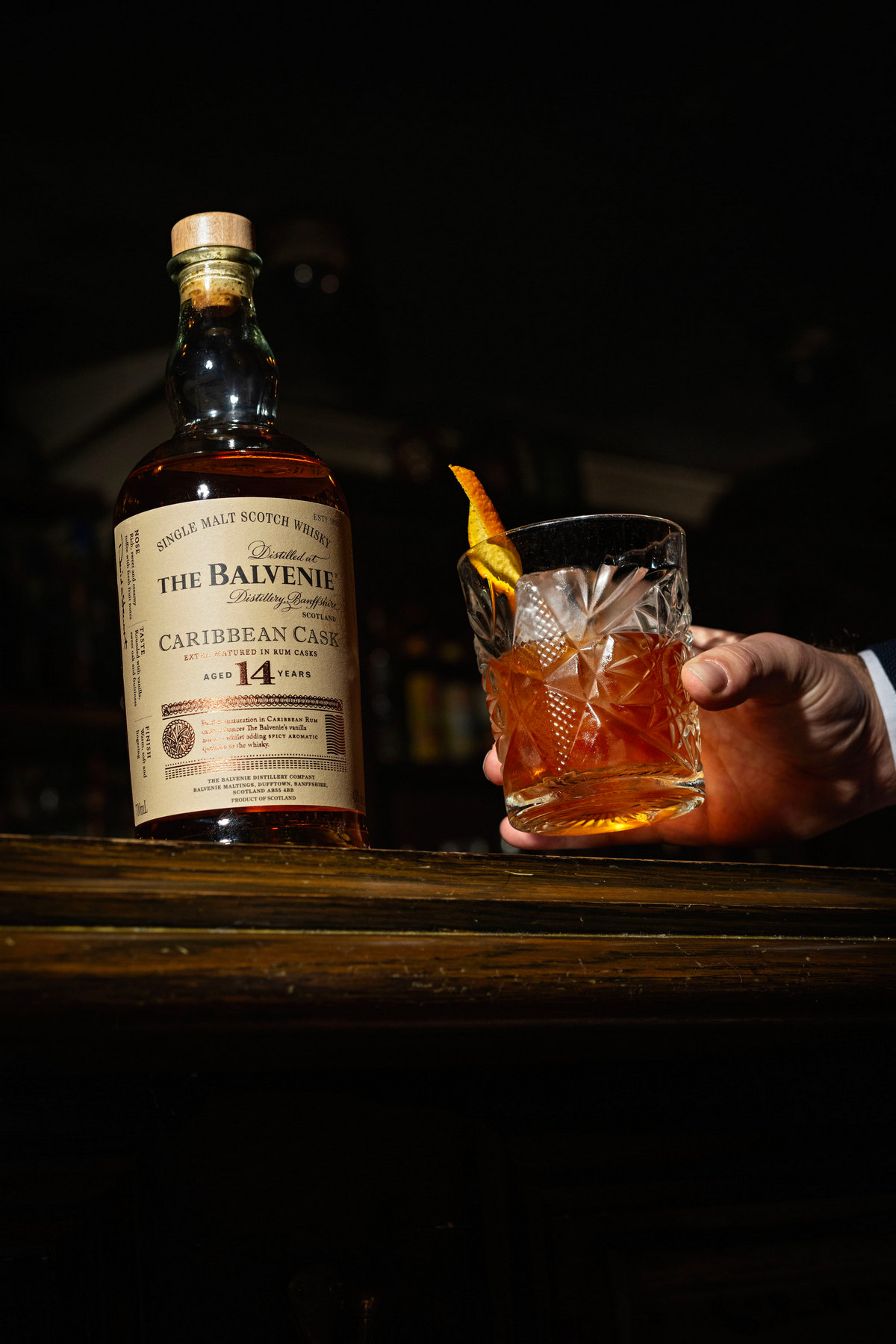 This is honestly just the bones of this story. I have about six other off shoot stories that this can go down from cask finishing to the “other” stories but I’m going to have to fill you in on them over a dram at the bar. I’ve spent 18 months getting deeper into our rum finishing process and with every drop I learn I appreciate these whiskies even more. The dedication and passion from everyone at William Grant & Sons means we can make something that takes longer, is harder to do and even wanders away from whisky making for a while just to get something that tastes this good.

I caught up with Kelsey just before writing this again and she summed it up perfectly.
“There isn’t any aspect of making whisky and creating flavour that should be underestimated and we pride ourselves in doing things the difficult way when needed to make sure that every bottle is perfect.”

So yes, this is doing it the hard way but every time I lift a dram and that aroma reaches my nose, I can smell that taking the difficult path, going above and beyond is something we all have to just do sometimes. Then sit back and enjoy the sweet toffee notes of that work.

If you have questions hit me up @thewhiskyspecialist