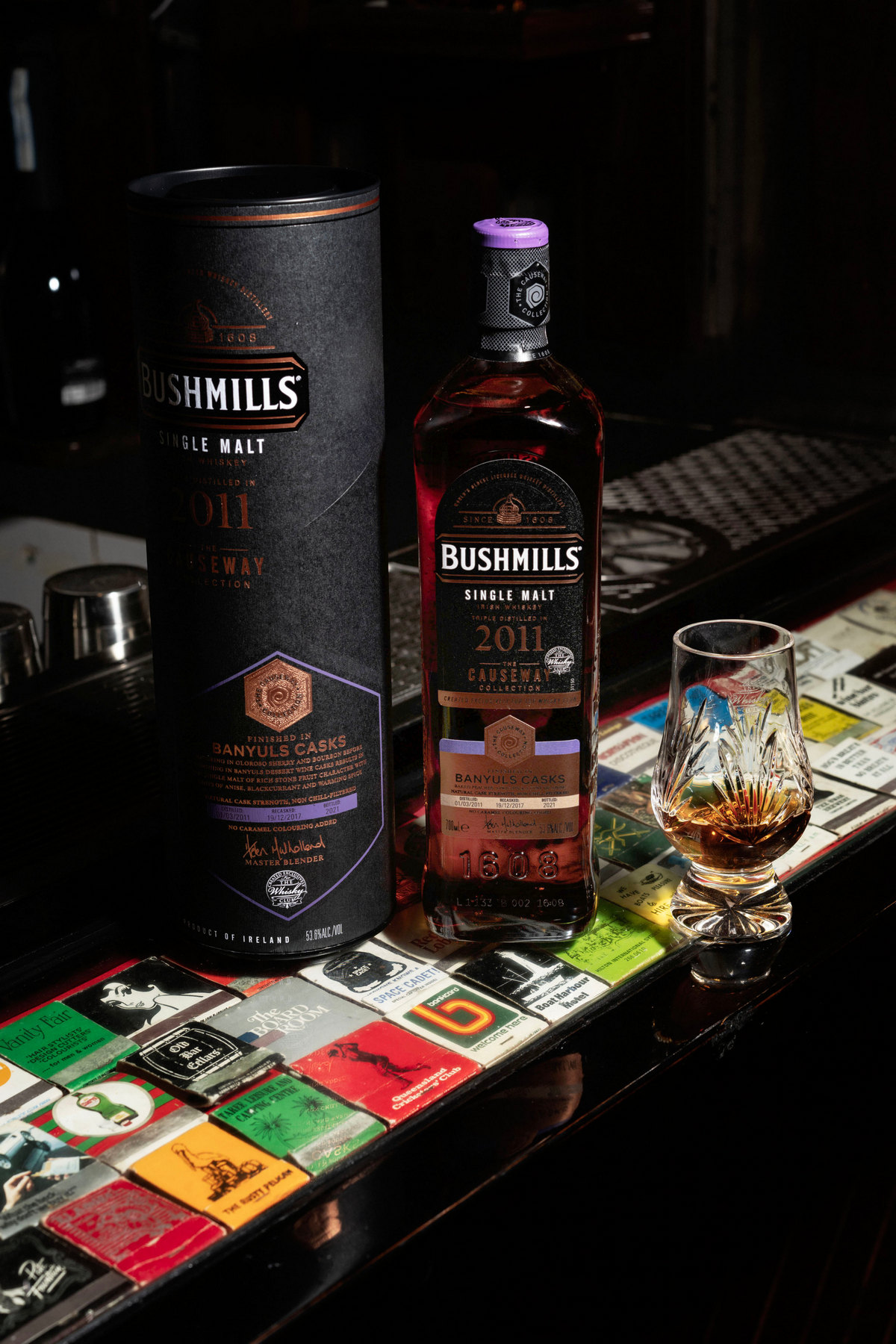 Last year, Bushmills launched its 2006 Marsala Cask through The Whisky Club. The release introduced the world to the new Bushmills Causeway Collection. The Marsala Cask, available only in Australia, sold out in 6 days and went on to fetch over AUD$2400 at auction on the secondary market.

In October, Bushmills announced the release of its second highly anticipated limited edition from The Causeway Collection. The 2011 Banyuls Cask is a natural cask strength (53.6% ABV) and non-chill filtered Irish single malt with no colour added. Matured for over six years in oloroso sherry butts and bourbon barrels, it was finished in rare Banyuls casks for an unprecedented three years.

We spoke to Colum Egan, Bushmills Master Distiller, Hayley Dixon, Proximo Spirits Specialist, and Seamus Carroll, The Whisky Club Ambassador and Buyer, about Irish Whiskey and why The Causeway Collection is creating such a stir.

Why are Aussies so passionate about Irish Whiskey?
HD: With so many new releases, higher ABVs, single malt styles and the added bonus of a lighter flavour profile there isn’t much Irish can’t do. It plays well in mixability, specifically in refreshing serves, which are all the craze right now, but it then backs that up with some seriously strong contenders for single malts like Bushmills 21 year that could turn even the most discerning Scotch drinker with its layers of tropical fruit, rich malt and dark chocolate.

How does Bushmills balance the traditions of its long history with creating modern expressions, like The Causeway Collection?
CE: All the whiskeys used in The Causeway Collection have been expertly created and cared for by craftsmen steeped in a unique whiskey-making tradition passed from generation to generation for more than 400 years here at The Old Bushmills Distillery. The Causeway Collection celebrates our extremely rare and unique cask finishes, our passion for single malts and honours our rich heritage. It’s a privilege to work with such rare liquid; these special cask-finished whiskeys really are our greatest treasures.

HD: We have our core range of single malts that showcases the definition of traditional whiskey making and has stood the test of time, and then we have the super innovative and exciting limited editions, like The Causeway Collection, that remind drinkers why Bushmills, perfected over 400 years, is still a favourite the world over.

“I’m counting down to the moment I can pop a cork in a clubhouse and see the look on people’s faces when they first experience it.” – Seamus Carroll,
The Whisky Club Ambassador

Do we have another global keepsake on our hands here?
HD: Probably! The 2011 Banyuls Cask is unlike any release we have seen from Bushmills here in Australia. What sets it apart for me is the extended three year finish. Typically, a cask finish is carried out for around six months to a year. Being a French dessert style wine cask, this easily could have fallen on the sweet side, but I guess that’s what makes our Blending Team one of the most celebrated in whiskey.

CE: We were delighted with how the Bushmills Causeway Collection was received globally in 2020, with some even selling out in minutes – and we can’t wait to share this year’s Collection – and the 2011 Banyuls Cask with Australia.

Why did you choose the 2011 Banyuls Cask for this month’s The Whisky Club exclusive?
SC: In 2020, we fell in love with the first release of The Causeway Collection; it sent our members into a frenzy.
Bushmills spirit, built for our members, with that luscious higher ABV, rich Marsala casks and not to mention a world first. Before long, members were sharing bottles, Clubhouses needed the release on their bars, listings in auctions were exploding in value and members were flooding social media talking about their experiences and where to get more.
While this was going on, we were already working with Colum to bring Banyuls to life for Australia. Guided by The Old Bushmills Distillery, we found the naturally sweet fortified wine Banyuls from France, this time to be bottled at natural cask strength. The working samples of this whiskey had already become a prized possession in our office so we knew we were on to a winner.

What makes the 2011 Banyuls Cask special?
SC: Really, this whiskey shines when you taste it. I’m counting down to the moment I can pop a cork in a Clubhouse and see the look on people’s faces when they first experience it.
The release of the 2011 Banyuls is definitively the biggest ever Irish whiskey for Australia. A chewy, rich, fruity explosion. Pastries, baked stone fruits, notes of homemade berry jams. It very much feels like the Oloroso and American Oak set a rich base for this whiskey that’s been elevated further and made bright with the fruity sweet influence of the Banyuls.
At the end of the day, this is an exceptional whiskey and a world first. We’re happy to be bringing it to life and getting it to our members who I’m confident will love it.

For more information on the Bushmills Causeway Collection, reach out to your Proximo Spirits representative.

Bushmills Causeway Collection: The Master Blender, the Whiskey Specialist & The Whisky Club on how Bushmills is elevating Irish single malts