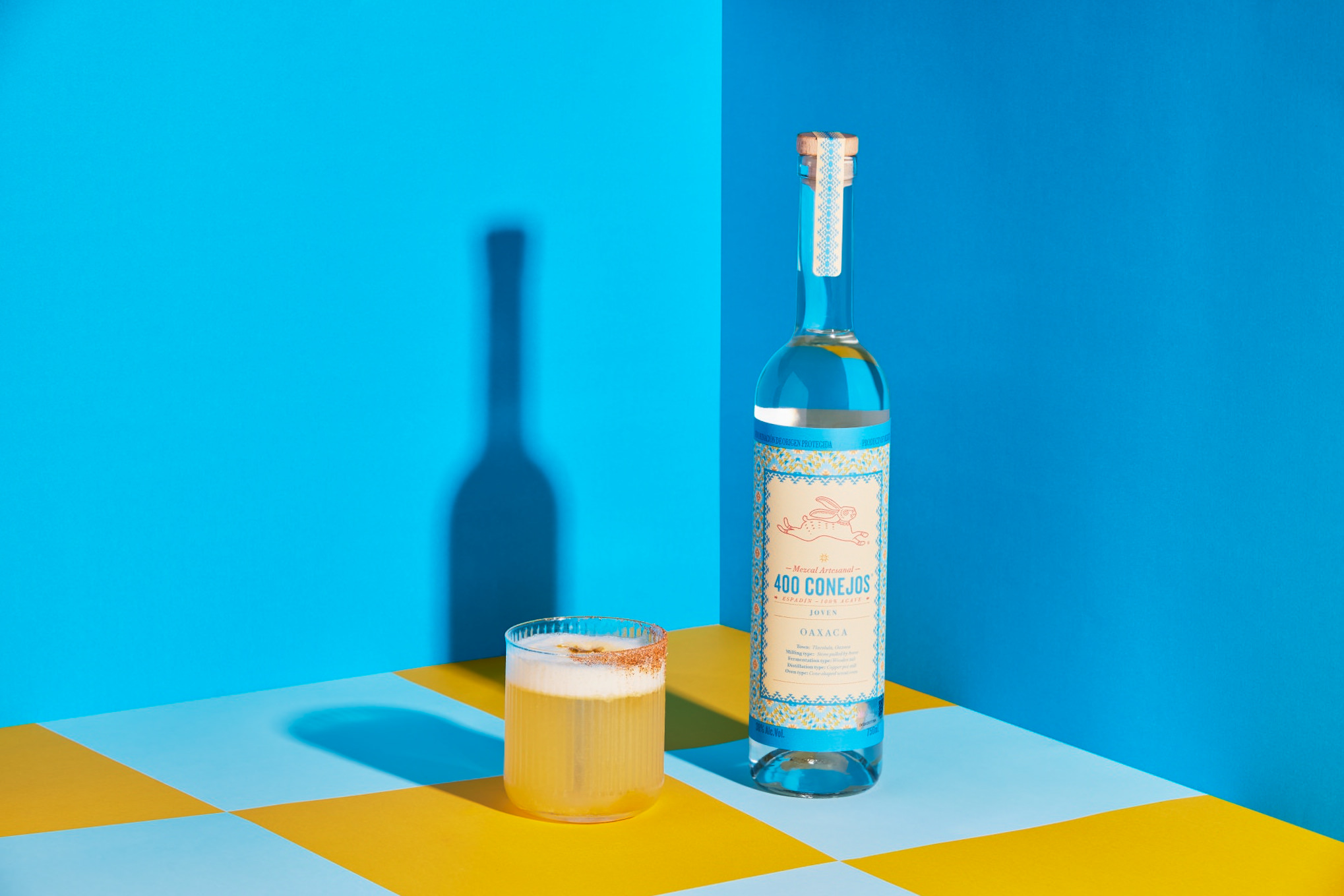 The name of this joven, 100% Espadín Mezcal comes from the myth of the gods of drinking – the 400 offspring of Mayahuel (the goddess of agave, fertility, and nourishment) and Petecatl (god of medicine), who were always pictured as rabbits (conejos) in Aztec art.

According to legend the 400 rabbits would gather regularly to drink together. Each rabbit had a different personality, and it was believed that when drinking Mezcal, the behaviour of whoever drank the spirit could be influenced by one of these rabbits.

Overseen by Don Tacho, 400 Conejos’ Master Mezcalero, every care is taken to meticulously cultivate the Espadín agaves used in 400 Conejos production. These agaves take between eight and 15 years to reach their optimum maturity, to ensure that the terroir flows through into the final spirit.

According to legend the 400 rabbits would gather regularly to drink together. Each rabbit had a different personality, and it was believed that when drinking Mezcal, the behaviour of whoever drank the spirit could be influenced by one of these rabbits.

The harvested piñas are cooked in traditional cone-shaped ovens with ocote, mesquite and oak wood for three to five days, carefully, without burning, so they retain the essence of their flavour. After being ground with a tahona stone, following the centuries old tradition, the extracted liquid is then fermented and double distilled in copper pot stills. This allows the Master Mezcalero to better highlight the flavour notes of this smooth, subtle, joven Mezcal.

Inspired by Hunter Orahood’s cocktail ‘Crimes of Passion’ created in 2018 at the Aussie owned ‘Attaboy’ in NYC. 400 Conejos is full of tropical pineapple and pepper, and I really wanted to keep the Mezcal as the hero of the drink, so I have taken those flavours, and enhanced them to create a fun, refreshing and poppin’ cocktail, perfect for springtime.

Being part of a team at an agave bar in Darwin for nearly a decade has been a great challenge. In the early days, 18-year-old me would follow owner, David, around listening to him talk about agave spirits to all – every time he spoke about Mezcal I could see how excited he became. For me, the hundreds who have made up our team over the years, and the thousands of guests in that time, being able to drink great Tequilas and Mezcals, and learn about what makes agave spirits so special, is down to David’s passion. As my time at Hot Tamale ends, Pravin will be taking over as Bar Manager – he began with basic agave knowledge and has grown into a massive knowledge base of all thing’s agave and an avid Mezcal lover. This cocktail was created by Pravin and myself and will be my last creation for Hot Tamale.

We wanted to create a bright, fresh drink with a burst of perfectly balanced, unusual flavours to excite the palate. The colour is vibrant, just like Mexico, and it’s the type of drink that just makes you want to dance. We recommend serving this one with a bangin’ soundtrack, in a bar full of legends, and we assure you, it will be the life of the party. Named appropriately after a blues song by the same name, by Big Joe Turner from New Orleans in the 1950s, and those chaotic 400 Rabbits.

For more information about 400 Conejos Mezcal please reach out to your Proximo Spirits representative.

Anneliese Grazioli: This powerhouse from the Top End, just opened her own cocktail bar, Hanky Panky’s

Grace Rawlins: Australian Bartender Magazine’s Rookie of the Year on dry dirty Martinis and why the world is her oyster

“Is it like a first drafts pick in in the AFL, becoming captain in the same year?” Melanie Hack on rapid career progression and industry-wide staff shortages