You say the name Piccolo Bar and many older Sydneysiders will most likely nod their heads in recognition. Some remember it from wayward teen years. Some from watching Richard Roxburgh occupy the space like a loungeroom in the beloved TV show Rake. Some because of the colourful long-time owner, Vittorio Bianchi who attracted a slew of celebrities and artists to his iconic 24-hour cafe. However you remember it, it has been a staple of the Sydney landscape for nearly 70 years.

And thankfully, despite some rocky years, the Piccolo Bar will continue to operate in a new incarnation, and under the ownership of Bartender magazine founder, Dave Spanton. Dave, who also runs Sydney Bar Week in addition to Bartender magazine, had some time on his hands back in 2020 thanks to COVID. He heard that The Piccolo Bar, the oldest café in Kings Cross, dating all the way back to 1952, was in danger of closing for good.

“The last decade has nearly destroyed Kings Cross, thanks to the ill-conceived and indiscriminate lockout laws that forced so many businesses to close their doors,” says Dave. “Piccolo Bar was one of these venues that had closed and then re-opened multiple times. It was really on life support by 2020 and Sydney was in danger of losing its oldest cafe and one if its most historic late-night hang-outs.”

With time on his hands, Dave says: “I felt compelled to take the plunge and try to save this iconic hospitality venue. It’s a tiny little place with space for just 20 guests but it seemed like the perfect opportunity to help in the mission to revitalise The Cross.”

The first step in the process was to secure a liquor license for the site. Dave felt that the area already had enough cafes and that a new direction could breathe life back into the old Piccolo. “I wanted to create a European-style aperitivo bar because I really thought it was the right fit for the space and the location,” Dave says.

“Since taking over I have heard so many amazing stories of the characters that have spent time in these four walls – everyone from Jeff Buckley, Mel Gibson, Geoffrey Rush, Marianne Faithful, the Red Hot Chilli Peppers and Gough Whitlam. If only these walls could talk!” – Dave Spanton

To bring this new vision for Piccolo Bar to life; Dave teamed up with his old friend, artist and designer Michael Delany (Honkytonks, The Bottom End, Prince of Wales, The Forrester’s, The Oxford Tavern, among others) who brought his artistic flair to the venue. The look has been a painstaking labour of love for both Dave and Michael. Every detail has been mulled over from the old matchbooks that sit under the glass bar top to the mosaic entryway.

“We created a completely new fit-out that still pays respect to the history and people that frequented the café,” says Dave, referencing the many famous people that have been to Piccolo in the past, many of them now immortalised with a mugshot on the iconic photo wall. “Since taking over I have heard so many amazing stories of the characters that have spent time in these four walls – everyone from Jeff Buckley, Mel Gibson, Geoffrey Rush, Marianne Faithful, the Red Hot Chilli Peppers and Gough Whitlam. If only these walls could talk!” laughs Dave.

When it comes to all the tiny details that fill the space, Dave says: “I spent a small fortune on eBay collecting historic Kings Cross photos for the walls, vintage bar matches, as well as a few hard-to-find Amari to fill out the backbar. I think it gives the bar that old school vibe which we wanted to bring back.” Despite all the work that has gone into the renovation, Dave says there is a sense of satisfaction when people think it’s really old.

Dave also had a very clear vision when it came to putting the drinks list together. With over 25 years of immersion in hospitality, his vision for the list was crystal clear. Classic cocktails done well. “I always knew we would just focus on rotating classic cocktails with no real twists and mostly with three ingredients,” says Dave. “It works for a few reasons – it’s an old-style bar and the bar itself is tiny, meaning there is limited space for prep and storage.”

The current list features 17 classic drinks from the Tommy’s to the Hanky Panky. From 4pm-6pm each day, five of these drinks (Negroni, Garibaldi, Spritz, Americano and Bellini) are available for Aperitivo Hour for just $12.

Beyond the classic cocktails the real pitch here is a focus on aromatised wines and vermouth. “We are passionate about all things bitter,” says Dave and there are 32 products featured in these categories alone. The list covers everything from Quinquina and Barolo Chinato (in the aromatised wine category) to Apertif (think St George Bruto and Suze) and Amari (think Amaro Alpino and Braulio).

This style of booze is complicated (and often difficult to categorise), so to make the menu more user friendly, each product has some tasting notes and a suggested serve. Dave says: “We are working hard to showcase and demystify some of these products for our guests as they are delicious drinks, but they have often been relegated to gather dust on the backbar.”

Coming up with a food menu that was workable in less than a single square metre with no kitchen was the next hurdle. “Trying to find items that were quick and simple to prepare but super tasty wasn’t easy,” says Dave, “I think we nailed a nice selection including quality tinned seafood like Pollastrini Italian sardines, LP’s hot dogs, a pork & pistachio terrine, plus a weekly rotating cheese plate from our neighbour Penny’s Cheese Shop. I have to thank Cam Birt from Fino Foods who was a big help in fine-tuning the menu.”

On the staff front, Dave says he has been really lucky with the people that have landed behind the bar and front of house, especially with the current staff shortages. Harrison Lind, a young gun bartender from Rosie Campbell’s, Michael Drescher, from Big Poppa’s and Bartolo, and Neil Steigrad from Cruise Bar. Veteran of the industry, former bar owner and editor of Bartender magazine, Simon McGoram has even put his hand up to do some celebrity shifts. 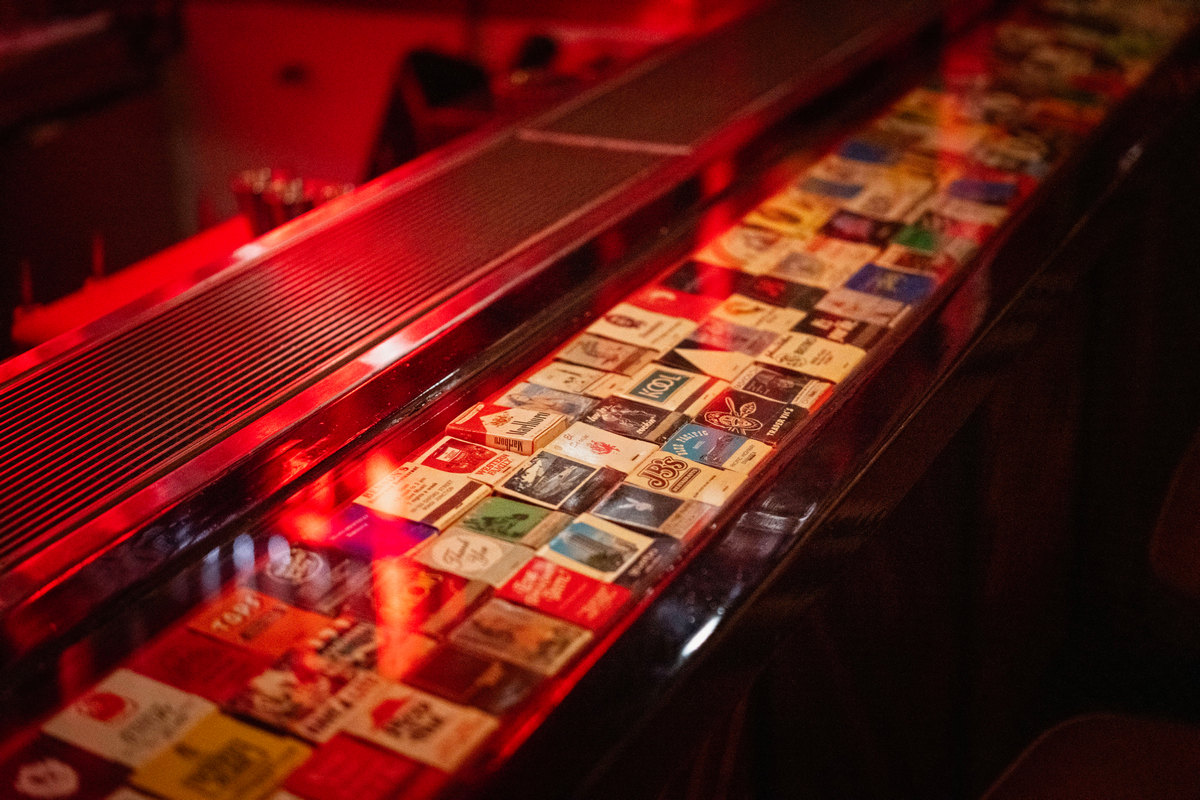 Saving the Piccolo would not have been possible without the support of legendary Vittorio Bianchi (the long-time operator who ran Piccolo for over 50 years) and his family, which makes for some nice continuity. Vittorio’s family own the lot, so they are still the Piccolo landlord. “The family have been very supportive of my plans to revive the bar and give it a viable future,” says Dave. “It’s my honour to look after it and I hope I’m not the last. Sydney needs to hold onto such historic venues so that we can enjoy them both now and in the future.”