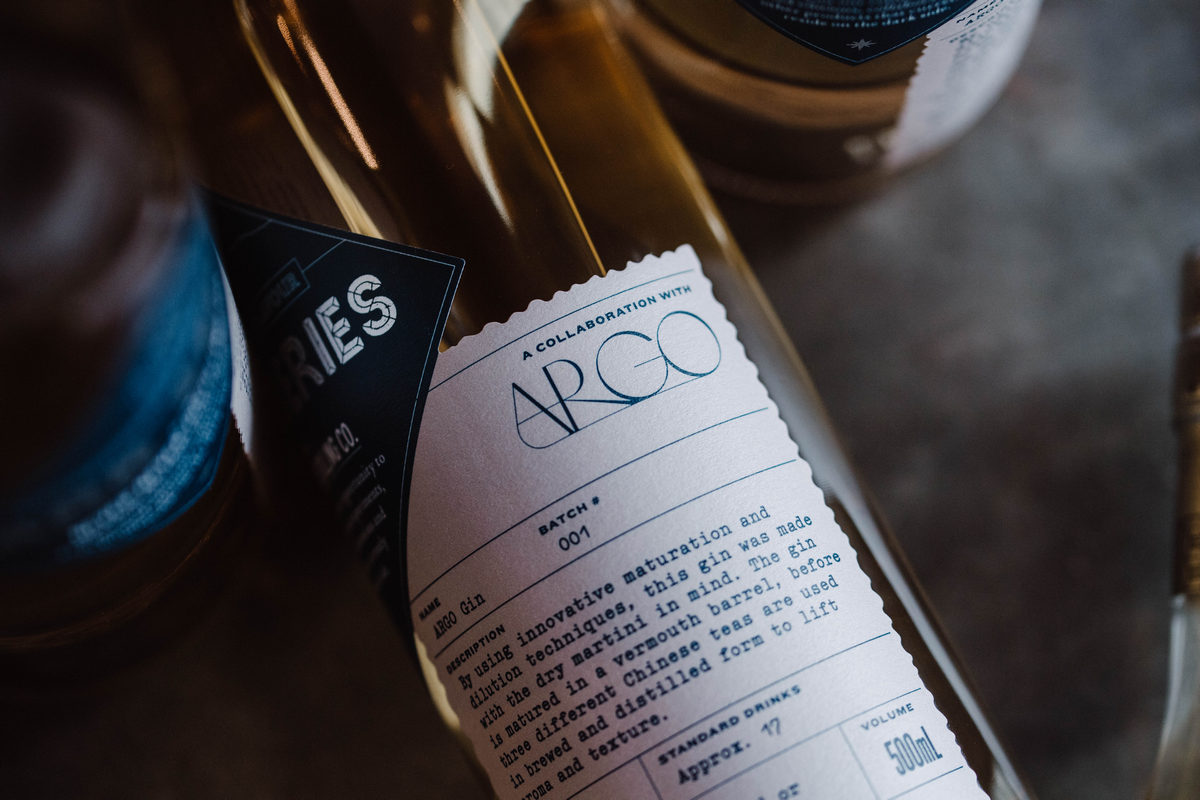 Never Never is setting the standard for innovation and exhilarating spirit creations.

A bead of cold sweat rolls down the back of Sean’s neck when Lorenzo tells him what they wanted to create for their Never Never ARGO Dark Series collaboration. “A gin that will innovate the way people drink martinis” and sit at the heart of the cocktail list of Asia’s most exciting new bar. Oh, and of course be outrageously delicious.

“Sure. Piece of cake, no drama, we can make it happen,” were the words that automatically rolled out of Sean’s mouth, only slightly muffled by the silent scream of how the hell the Never Never team were going to innovate the world’s most famous and revered classic cocktail.

Six months later the gin picked up a 95 at the International Wine and Spirits Awards and was flying over the bar at ARGO every night. And of course, it is outrageously delicious.
That’s usually the general theme when it comes to the Dark Series, flavour above all else and setting the bar high when it comes to innovative liquid. The Dark Series products have always been unique experimentations in spirit; often working with the ultimate flavour creatives, who collaborate and educate when it comes to their vision for the project.

ARGO Gin was the first time Never Never built a gin with the martini as the clear purpose when it came to the final serve. The result was a gin that not only became the cornerstone cocktail of ARGO but continued the tradition of innovation and award-winning flavour.

Being a bar built within the walls of the Four Seasons Hong Kong, it made sense to use traditional Chinese tea as a key ingredient. Where the innovation lies was integrating various local tea varieties as both brewed and distilled elements, before aging the gin in an ex- Chardonnay barrel that was rapidly seasoned with dry vermouth under vacuum.
It was a classic example of a spirit brand using technique and flavour built from contemporary bar trends and the reason why the Dark Series has been so widely supported by the Australian trade.

ARGO Gin was the first time Never Never built a gin with the martini as the clear purpose when it came to the final serve. The result was a gin that not only became the cornerstone cocktail of ARGO but continued the tradition of innovation and award-winning flavour.

The main reason the Dark Series have been so successful is because each one works with collaborators who believe in the product, and because they command respect within the Australian hospitality scene.

The very first Dark Series release was an Australian Aquavit called Stockholm Syndrome, made with Michael Chiem at PS40, one of Australia’s most prominent bartenders and operators. It started over a boozy conversation in the wee hours of a Sydney night out (where most great ideas happen).

It was the first Australian Aquavit of its type, marrying Australian native ingredients with a traditional Nordic botanical structure. The result was simply exquisite, blending macadamia, various myrtles and riberry with traditional fennel and caraway. It’s something never seen before in Australia, a truly innovative take on the category, reinterpreting the way to drive flavour at every level.

“Mainly we just wanted to work with MC,” says Sean. “His big cocktail energy is something that has taken the PS40 name and put it up in lights across Asia and the world, we were pumped to see what he could do when given the reins of a new product.”

The martini has always been a ‘go to’ serve for Dark Series gin products. It’s a cocktail that highlights the specialness of each gin and amplifies its inherent qualities. The martini has been a focus of the Never Never team across many releases especially the olive and orange combination found in Med Gin or the citrus and savoury notes that make Southern Strength Gin so special.

“We even collaborated with Spring Gully who are a South Australian cocktail onion provider so we could supply bars for free if they wanted to range a Gibson”, says Sean, “that’s how much we love martinis … and onions.”

When it comes to Never Never’s most recent Dark Series, the team revisit this passion for martinis and flip the script on contemporary coastal flavour.

Society is a restaurant that is a celebration of seafood in its entirety, so it was a no-brainer to explore the unique savoury characteristics of oyster shell when it came to creating a signature gin flavour.

“Oyster shell is an ingredient which delivers minerality and a subtle sea spray character to gin,” says Sean. “It’s a flavour supported by the carefully considered inclusion of other coastal ingredients such as Geraldton wax, coastal daisy bush, round mint, saltbush and Tasmanian wakame.”

In a dry martini the citrus and sea-spray jumps off the nose, while the palate delivers
a rich, creamy mouthfeel laced with sea brine and wakame umami. It’s a luxurious representation of just how good a martini can be and shows the versatility of Never Never’s range.

“Oyster shell is an ingredient which delivers minerality and a subtle sea spray character to gin,” says Sean. “It’s a flavour supported by the carefully considered inclusion of other coastal ingredients such as Geraldton wax, coastal daisy bush, round mint, saltbush and Tasmanian wakame.”

“I actually prefer it frozen straight out of an empty oyster shell,” says Sean, “it’s everything I love about memorable eating and drinking experiences wrapped up into a shot format,” he laughs.

The Dark Series label has also been updated, due to feedback from bartenders who wanted to make the product name easier to read for both customers and staff.

Shay Chamberlain formerly of the Black Pearl has recently joined the Never Never team. She is now their National Brand Ambassador having first worked with them on a Dark Series of her own, the Black Juniper Amaro. It was the first amaro of its kind, heavily influenced by the dark alpine flavours of northern Italy. It was made using heavily roasted juniper and basket juniper salvaged from the gin production process.

It was judged the third most innovative global spirit release of 2019 and continues to deliver on Never Never’s dedication to creating products driven by unique and creative flavour direction.

Never Never are dedicating 2022 to driving their Dark Series onto back bars and cocktail menus across the country. If you would like to range any of the products please reach out to your friendly neighbourhood Proof&Co representative at orders@proofandco.com.au