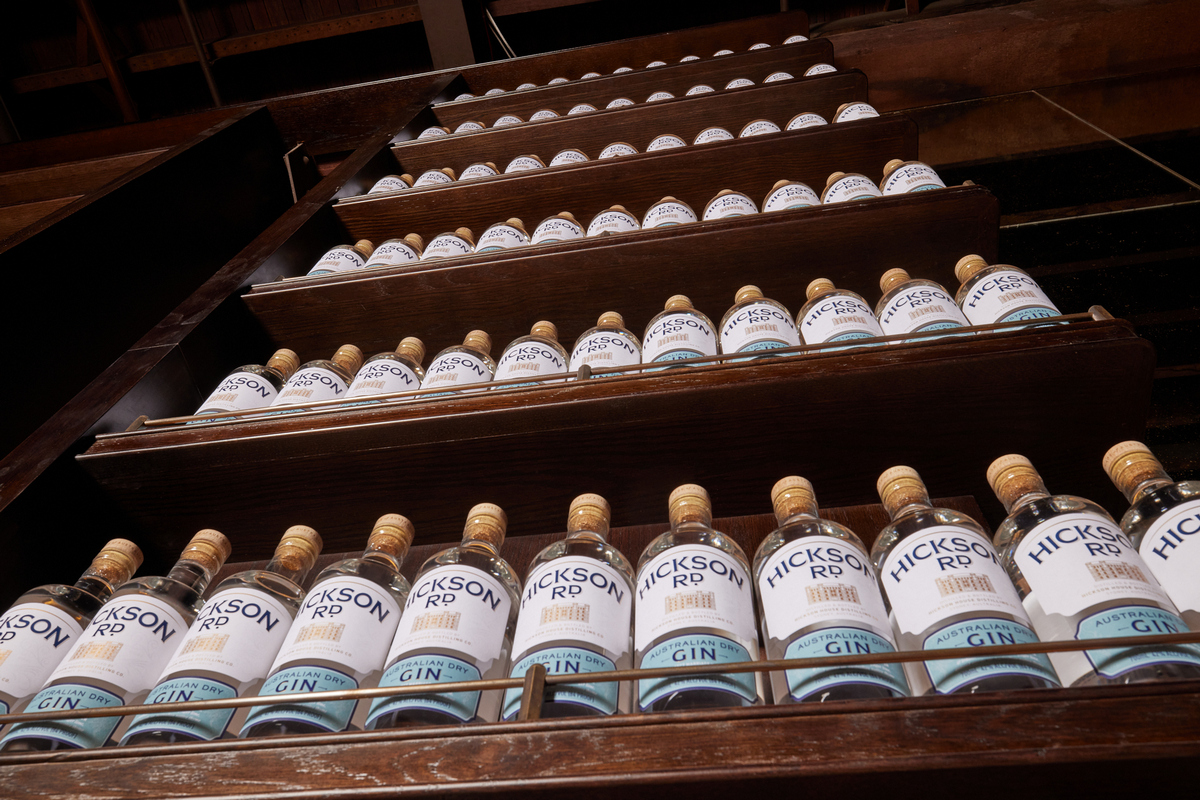 Hickson House is Sydney’s newest distillery, bar and dining experience set to shape the rocks into an even more exciting precinct alongside some new openings, Phillips Foote from the Swillhouse group as well as Frank Mac’s.

Set in an amazing heritage listed site, Hickson House is so close to the iconic Sydney Harbour Bridge and opera house that you almost wouldn’t believe something so ambitious and stunning could be found so close to such landmarks. It’s part of the charm and added to the challenge of opening a world-class venue. 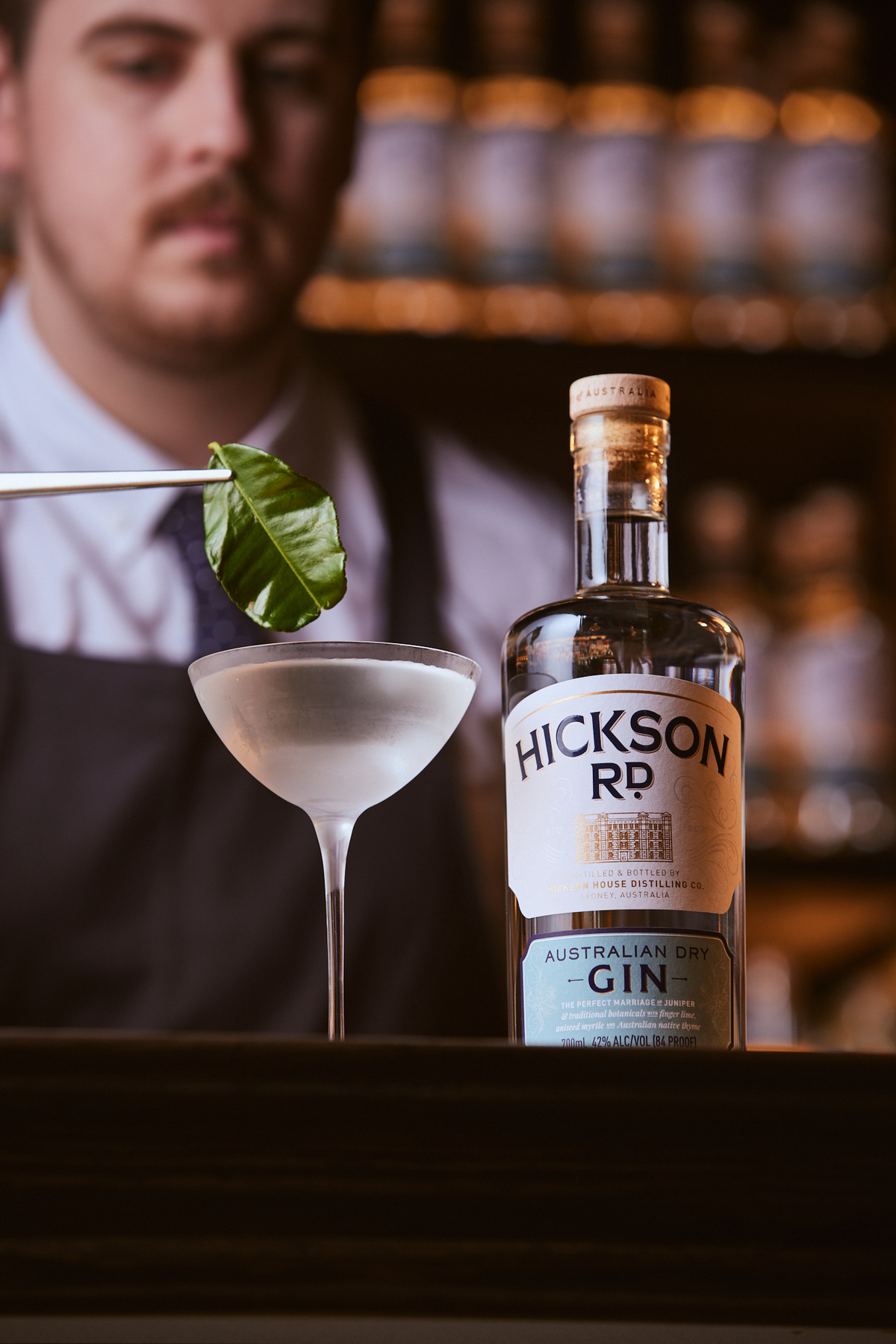 That is until you learn it is from the minds behind Barrelhouse group, which venues include The Barbershop and The Duke of Clarence. Mikey Enright and Julian Train had already opened one of the world’s most respected gin bars in the Barbershop and then followed suit with an amazing representation of a classic old boozer in the Duke of Clarence. They have stepped it up a rather large notch in the opening of Hickson House.

“The story started years ago, most likely over a pint, when Mikey Enright first talked to Tim Stones, ex-global Beefeater ambassador and previous head distiller at Manly Spirits. Years may have passed between The Barber Shop opening and a fateful, hungover morning at Tales of the Cocktail in 2016, where the two managed to finally sit down at the Ace Hotel and start imagining what they could achieve together.”

The story started years ago, most likely over a pint, when Mikey Enright first talked to Tim Stones, ex-global Beefeater ambassador and previous head distiller at Manly Spirits. Years may have passed between The Barber Shop opening and a fateful, hungover morning at Tales of the Cocktail in 2016, where the two managed to finally sit down at the Ace Hotel and start imagining what they could achieve together. 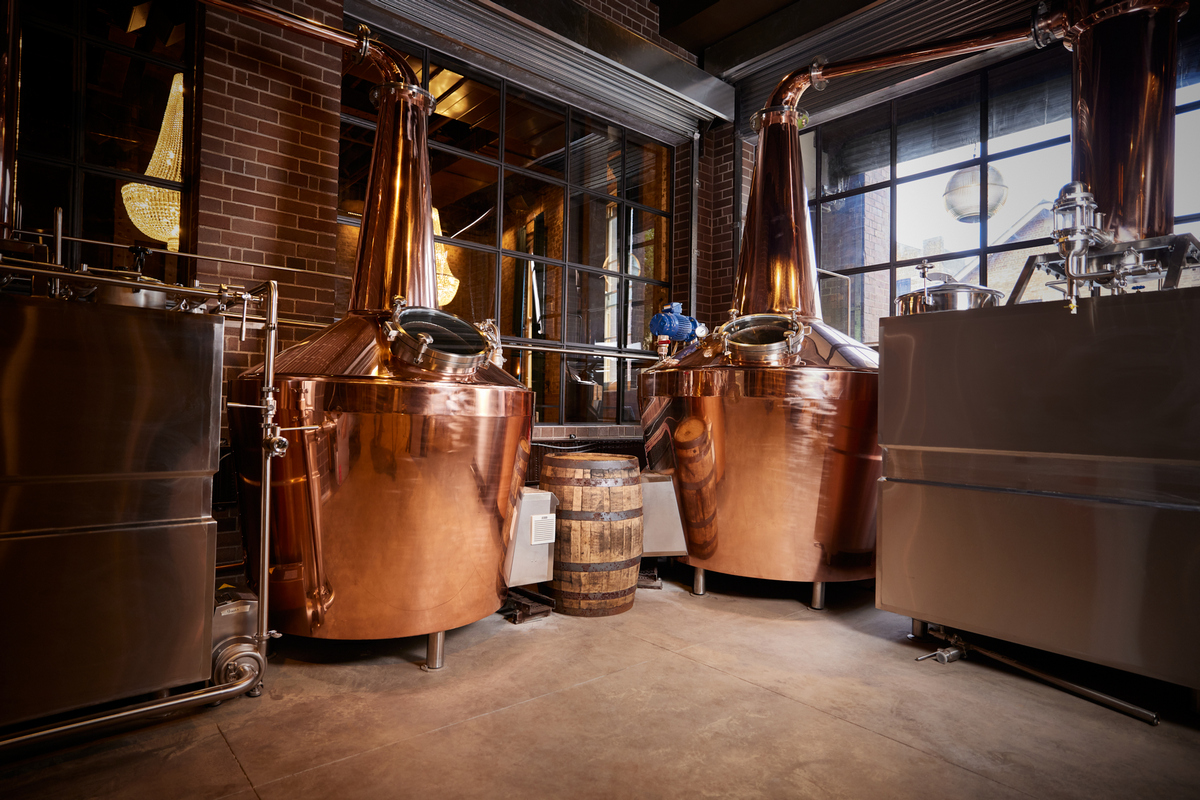 Mikey wanted a gin of his own but also not wanting to “half-arse it” meaning he wanted full control of the whole process from concept to delivery and even distribution. He knew he would need someone equally as ‘into’ gin as himself.

Tim Stones was just that man, having spent years under the wing of Edmond Payne, the respected master distiller behind many world-renowned gins including Beefeater 24. Tim not only knows his stuff but could also realise the dream they had.

Cue Tim relocating from London with his family and starting up a distillery in Manly where he got to test his ability in bringing someone’s gin dreams alive. Just not Mikey and Julian’s yet. Then a global pandemic hit. However, the conversation remained.

Tim found himself tinkering in his garage with a little bench still testing out every botanical he could to get a hold of to find what he wanted in not only a traditional London Dry style but also what would become a new Aussie gin “keeping one foot in tradition and the other in a sense of place”.

Tim, an avid bike rider, would then cycle the trial recipes the many kilometres to both Mikey’s house and Julian’s before pacing it back home to do a zoom call and discuss. A labour of love indeed.

Tim, an avid bike rider, would then cycle the trial recipes the many kilometres to both Mikey’s house and Julian’s before pacing it back home to do a zoom call and discuss. A labour of love indeed.

Tim says of lockdown that it gave him a lot of time to figure out what they liked and a lot of trial and error which, despite being forced apart, helped immensely to create the now stunning range of gins they have opened with.

The Gins they are opening with, the Australian Dry, London Dry and Harbour Strength – are made with ingredients sourced from all over Australia, often grown exclusively for the distillery. Made with a deep respect for Australia’s history, environment and future.

Created with some of the best gin minds in the world and produced in 800L copper pot stills, custom-made by local craftsmen in Griffith, New South Wales. 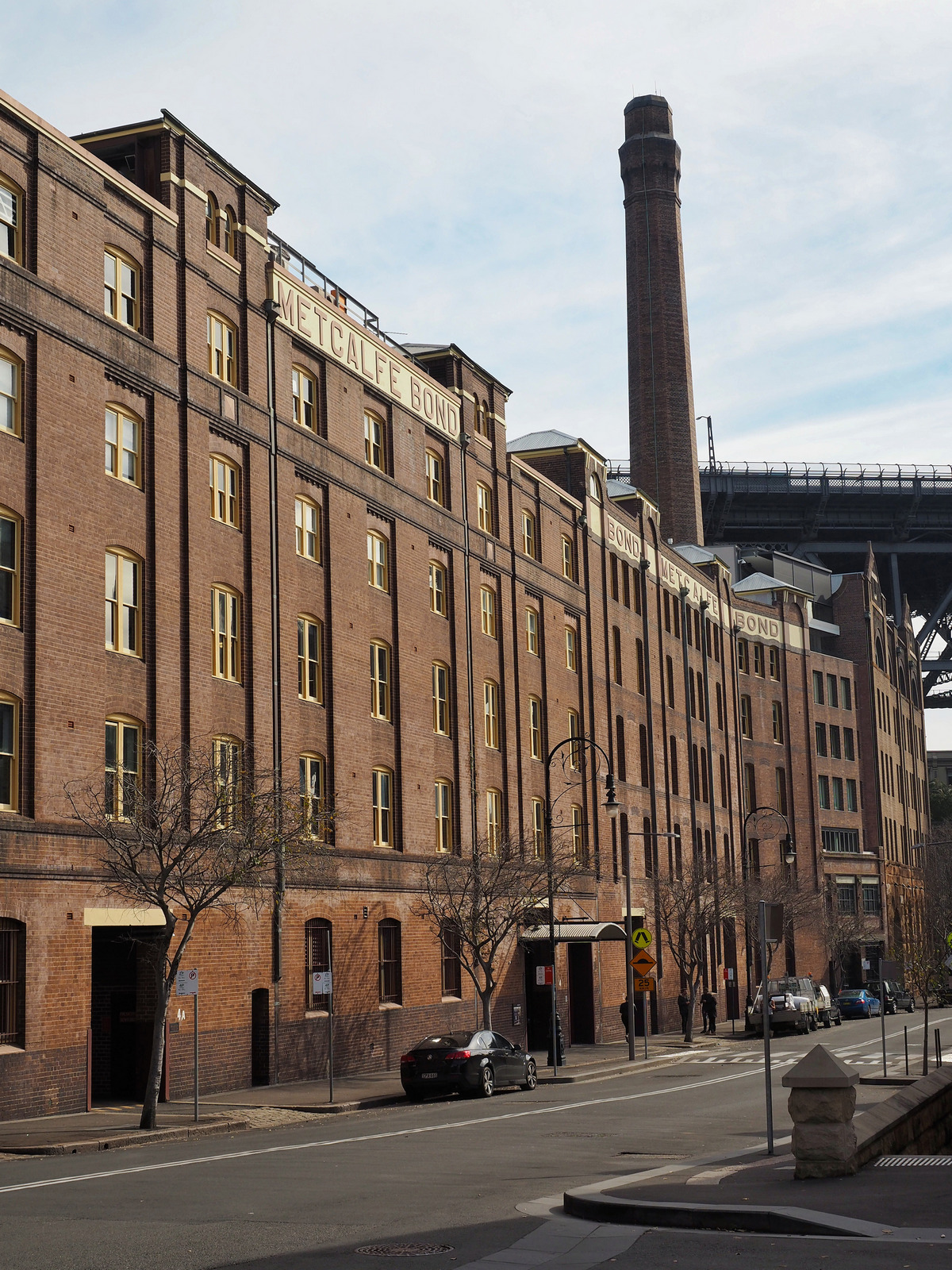 The Australian Dry is a marriage of 10 botanicals starting with a base that Tim describes as the ‘holy four’ – juniper, coriander seed, angelica and cardamon. He found the additions that he felt added to the gin a uniquely Australian style, like native thyme and finished with an ode to Desmond Payne with the addition of oolong tea.

Always striving for balance over any one botanical ingredient standing out, it certainly brings a nice touch to the Australian gin market which can sometimes be found to be very myrtle-y.

The London Dry and Harbour Strength being the same gin recipe at different strengths only gives a two-fold attack on how a balanced London dry style can be made in Australia. All with just one extra ingredient over the ‘Holy Four’ of traditional London Drys.

Wanting to give homage to the area it is being distilled, while keeping that sense of tradition he found, that after much and many tests, the addition of Australian saltbush gave a touch of salinity that brought it all together. It does.

Upon approaching the distillery, bar and restaurant you can’t help but notice the incredible bluey-green bricks at your feet welcoming you into the impressive space. They were a fateful part of the challenges of building in not only a heritage building but one set in the oldest suburb in Australia.

“We couldn’t touch a beam or brick, in fact, the beams are the same that the Harbour bridge is made from. We thought we had it all sorted till we were building the slab for the distillery until we uncovered a strip of 1910 era wooden bricks that would have been there for when horses and carts needed traction to get into the building all that time ago,” Tim tells me. 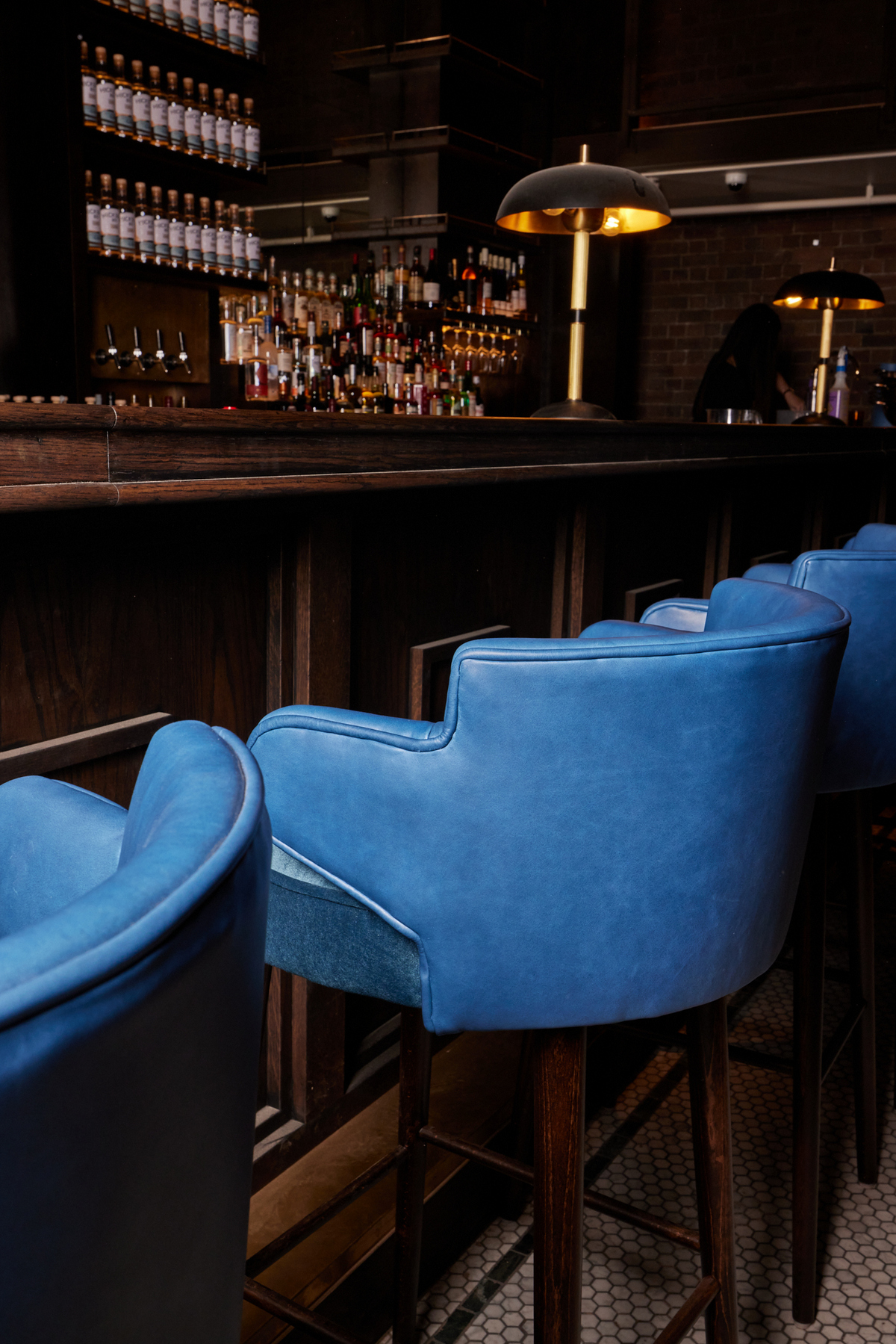 Cue an immense operation of surveying the ground underneath and then painstakingly peeling up the wood, which then by Heritage laws need to be reused as a feature of the space. Fitting then that they found a use for it in the entry into the beautiful space beyond.

Once through the door, to the left is an open window looking into the stills that will ignite a new addition to the Australian Gin and Whiskey scene. Though that is almost over-shadowed by the giant back bar full of not only its current bottles of spirit but also 600 plus of Australia’s and the world’s finest spirits. It’s a sight that I imagine can only be matched by the back bar at Atlas in Singapore. It is towering.

Alexandra Dahlenburg, Group Bar Manager, tells the story of turning on the brand-new air con for the first time and being showered by glitter, as the powerful new ducts reminded them that the space was once used for private parties that were secret but held stories of glitter guns and ‘phone at the door’ exclusivity.

“The space used to be used for invite-only private parties so when we got the aircon going for the first-time glitter showered from the ceiling,” said Alex. “After cleaning it all away I kept one piece for the memory of that day. If you spot it then you have a keen eye.”

“The space used to be used for invite-only private parties so when we got the aircon going for the first-time glitter showered from the ceiling,” said Alex. “After cleaning it all away I kept one piece for the memory of that day. If you spot it then you have a keen eye.”

Behind the beautiful back bar full of spirits that were hand-chosen by Alexandra and bar manager Raff there is a hidden kitchen featuring locally sourced, botanically inspired menu that includes flour-dusted squid with finger lime and pepper berry, slow-roast roast lamb porchetta with juniper jus and mint gremolata to share, and whisky chocolate lamington for dessert.

Up a staircase to the right of the main bar is a space reserved for even more intimate times and interesting cocktails. The space named ‘High and Dry’ featured a reduced menu of Whiskey and Wine but for those who do ascend the stairs, an elevated cocktail list of beverages only served upstairs.

The list downstairs is certainly not lacking however. I had the chance to try one of the Hickson House signature martinis, The Pearl. A tasty stirred down, served up libation featuring oyster pearl infused Hickson Rd Harbour Strength Gin, Nori vermouth, Acqua Bianca and samphire, created by bar manager Raphael Redant.

I also had a brief glimpse at the yet to be open bottle store which has more of those amazing old wooden bricks as the floor but also a look at the convic-milled sandstone behind thanks to a purpose placed window that shows them off. When it rains the bricks glisten with water as it pours down, which I was lucky to witness thanks to El Nina’s wild downpours.

Once you can take your eyes away from the back bar and towards the rest of the venue you may just notice the furniture is period piece too, all brought over from the UK under Mikey’s watchful eyes and it looks the part. If seated at the bar you will have a tough time choosing a beverage from the impressive cocktail list and extensive back bar, including some Aussie whiskies, lovingly supplied for Alex by her friends in the distilling industry.

I can’t wait to revisit and suggest anyone visiting Sydney make their way to Hickson House. The bar itself is a wonder, the décor is incredible and if you get the chance to go inside then the distillery it is something to be admired.

I haven’t even started talking about their plans for Whisky yet. Exciting stuff is on the cards for this epic venue, that’s for sure.