St Patrick’s day for some may bring up unfavourable memories of dodgy pubs, bad behaviour and intoxicated humans spilling out on the streets exclaiming ‘Kiss me I’m Irish’! Though that’s not what it’s always been about, especially in Ireland itself and the story of Maewyn Patrick is far more interesting.

Starting well back in 1631 as a ‘modest religious holiday’ to celebrate the life of St Patrick the Patron Saint of Ireland. Interestingly the man in question wasn’t even Irish, instead born Roman British around 1373 and at the age of 16 was captured by an Irish raiding crew and taken back to be sold into slavery.

Six years of servitude as a shepherd led to Patrick becoming fluent in the language and also finding God. According to his autobiographical letter confession, thought to have been written around 450 AD, an angel appeared in a dream urging him to flee from his enslavement. After being reunited with his family in Britain, he had a divine calling to the priesthood. He trained in France and returned to Ireland as a missionary in about 433 AD.
30 years travelling the country spreading the good word led to quite a few stories being told about Maewyn Patrick. One of which is that he rid Ireland of snakes. This is particularly wild as it is believed there never were snakes to begin with… maybe it was symbolic.

“St Pats day is probably the biggest day of the year for our two Irish venues. Sure, there will be a lot of Guinness and Kilkenny flowing through the taps and glasses clinking with Irish whiskey in them, but the day is more than a drinking fest; it’s about the coming together of friends and family, enjoying laughter and good times, sharing food, music, and dancing. Music is the big key to any successful St Pat’s day, a great blend of traditional Irish music during the day with all the classics coming out in the later hours.” – James Connolly, Durty Nelly’s & Galway Hooker, Perth

Something that seems to have more volition to it is the continued use of the colour green and the shamrock. The story goes that, to explain the Holy Trinity of the Church, he pulled out a three-leaf clover from the ground as a teaching tool to show the balance between each pillar. The colour green goes back to when the Irish independence crew used it as their flag rather than the Royal Blue of the King at the time and has since stuck.
Funnily enough, St Patrick’s day as the boozy celebration we relate it to increased due to the immense number of Irish settlers in North America. In Ireland, it did fall in between the time of Lent when giving up some foods and all booze was the norm, so it probably got a little spicy early on, however the sheer number of Irish immigrants in America has built it into a yearly festival. It only became a public holiday in 1904 and is now celebrated the world over.

Stephanie Shen, an Irish bartender who now works at Dead Rabbit in NYC says: “St Patrick’s Day represents different things for different people across our island. For the bartenders, it is no holds barred the craziest day of the year. It is bartending turned up to 11. Time to batten down the hatches as the rules don’t apply, chaos rules and it is balls to the wall definitively the wildest day to be behind a bar in Ireland,” says

Here in Australia, we are known to give it a nudge every now and then, Paddies Day is one of the days where that rings quite true. Double the amount of Guinness is sold on Paddies Day than the rest of the year according to the BBC.

James Conolly from Durty Nelly’s and The Galway Hooker in Perth looks forward to bumper days for both these venues each year. ‘St Pats day is probably the biggest day of the year for our two Irish venues,” he says. “Sure, there will be a lot of Guinness and Kilkenny flowing through the taps and glasses clinking with Irish whiskey in them, but the day is more than a drinking fest; it’s about the coming together of friends and family, enjoying laughter and good times, sharing food, music, and dancing. Music is the big key to any successful St Pat’s day, a great blend of traditional Irish music during the day with all the classics coming out in the later hours.”

James says the punters come because they know they will be entertained. “We have a day full of entertainment at both venues with local traditional Irish dancers and live local bands,” he says. “Galway will be running oysters specials all day (goes perfect with a pint of the black stuff). Durty’s takes over the laneway opposite to create an epic alfresco Guinness Garden. I don’t drink Guinness everyday but I always have one on St Pats, the more it flows the better it gets!”

However you celebrate, and I do hope it’s with a Guinness in hand and a wee dram of whiskey.

Add these whiskies to your repertoire… 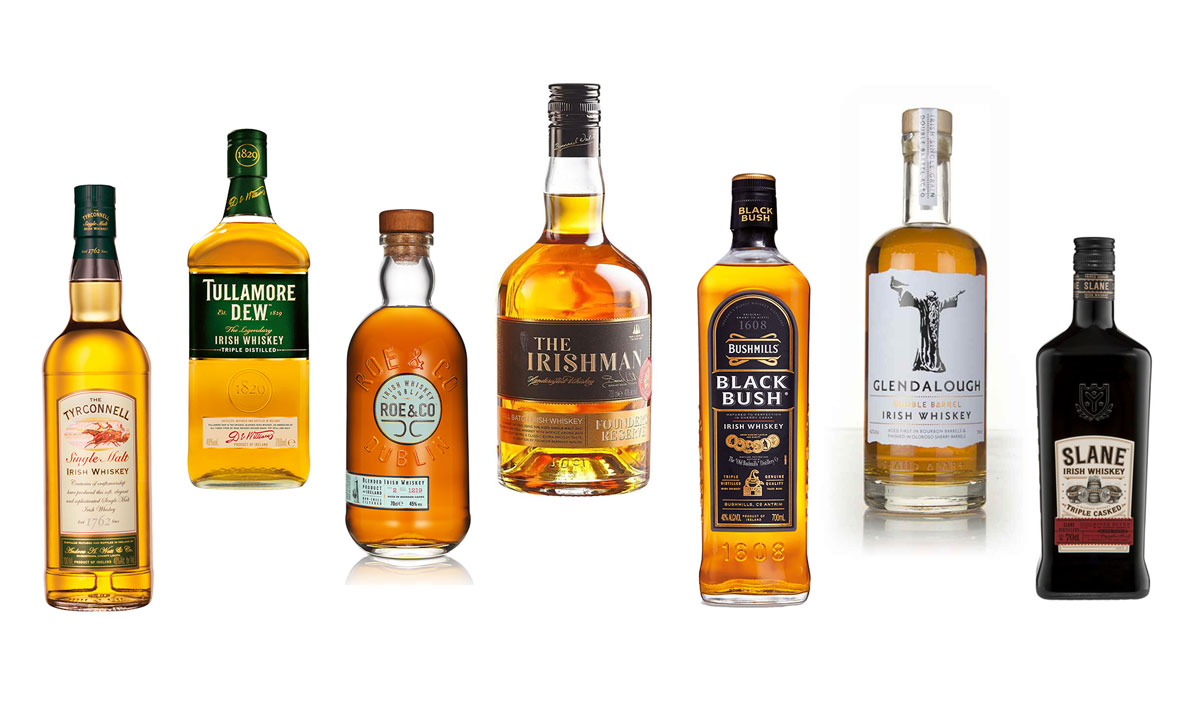 There are some quality Irish Whiskies on the markets these days. But don’t just wait for one day in March to add them to your list. Sub out your whiskey Irish Whiskey Old Fashioned or an Irish Manhattan (sometimes called the Rory O’More) and of course, the classic Irish coffee.

Roe & Co Blended Irish Whiskey
Having just been released in March of 2017, Roe & Co Blended Irish Whiskey is one of the youngest whiskeys on the market but a fitting brew to pay homage to one of the oldest and most notable names in the distillery lexicon. Named in honour of George Roe, one of the men who ushered in the golden era of Irish whiskeys, it is a blend of a rich single malt and grain whiskeys aged in mostly virgin casks. Its flavour profile is rich in vanilla with fruity undertones and soft spice highlights. Diageo

Bushmills Black Bush Irish Whiskey
The dark colouring is a result of maturing for up to seven years in Spanish oloroso sherry casks and sweet bourbon barrels. On the palate‚ this 80% malt whiskey floats across the tongue to deliver dark‚ velvety fruity notes right through to the back of your throat. Proximo Spirits

The Tyrconnell Irish Whiskey
The Tyrconnell Single Malt Irish Whiskey is produced by the Cooley distillery, and is a single malt Irish whiskey. Notes of marzipan up front, with a light spice, cinnamon and clove, following through to a creamy palate. Beam Suntory/CCA

Slane Irish Whiskey
Smooth, complex and robust. Slane Irish Whiskey marries toasted grain and malt whiskeys with the distinctive flavours of each cask. It is aged in three varieties of casks: Virgin and Seasoned casks raised by hand at the venerated Brown-Forman Cooperages – and Oloroso sherry casks by way of Jerez in Spain. Once the liquid has been aged to perfection, it is masterfully blended to create an exceptional Irish whiskey. Brown-Forman

The Irishman Founders Reserve Whiskey
The Founder’s Reserve is a unique take on the old Irish Pot Still Whiskey and is the original and signature blend created by founder Bernard Walsh. It is a blend of two styles, Single Malt and Single Pot Still. The proportions used are 70% Single Malt and 30% Single Pot Still. The Founder’s Reserve is triple distilled and matured in Bourbon Casks. Amber Beverages