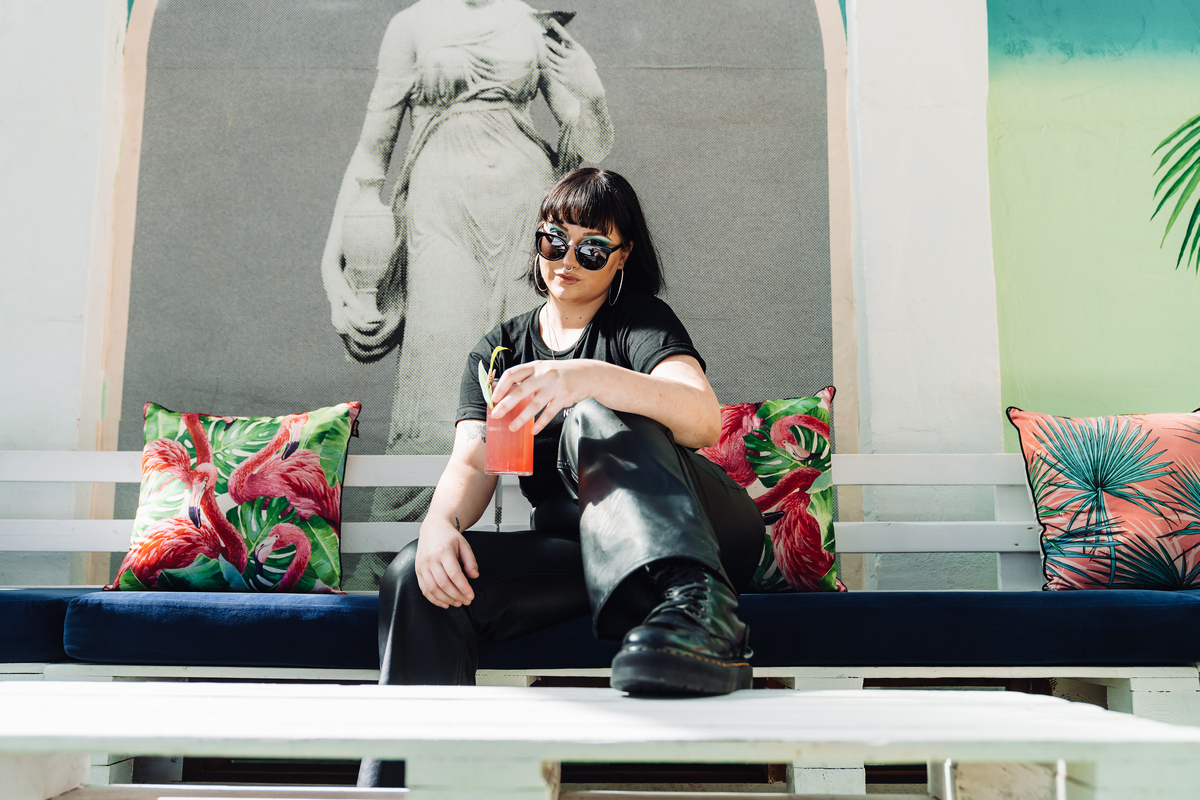 Interview by Jono Carr. Jono is one of our regular Drinks Writers. He is also co-owner of Sydney bar, About Time @abouttimesydney. You can reach Jono at drinks@spantonmedia.com

Madi Jeffery is well and truly a part of the Perth bar scene, a scene that was isolated from the rest of the country for two years. Here, she talks about how tight-knit the WA scene has become and how it’s the people that keep her going back day after day.

How did you get into the hospitality industry?
I was lucky enough to start my hospitality career in small bars. I was able to learn about a mix of spirits, beers, wines and cocktails and progressed from glassy to bartender fairly quickly. Working at Alfred’s, ensured I was able to meet and learn from some amazing people, pretty early on, which I’m super grateful for.

How did you start at your current gig?
I loved Neon Palms as a venue before working there and really felt like moving from Alfred’s would be a new and exciting challenge. It meant that I could work with different spirits, experience a different area of Perth and work with new people. It also meant I could work in a place with windows which is always a bonus.

What are you drinking right now?
Mezcal! Or really any Agave or Cane spirit, I’m there. Big fan of a Daiquiri or Mojito too.

“The Perth hospo scene is super tight-knit, it’s really cool to see how all the venues help and support each other. There are also so many venues that have just opened or opening as well, that are really revitalising the culture in Perth. It’s really amazing, not just for hospitality, but for the general public as well.”

What are some of the things you love about hospo?
The people have to be my favourite part of the industry. Fundamentally, I’m a people person at heart and love interacting with others. Being surrounded by so many accepting and like-minded people is something so unique to hospitality. It’s a wonderful feeling to be able to go to work and love the people you work with. I think also, being able to be so passionate about my job. I love being able to talk to customers about booze.

What are some of the things you don’t like about the hospitality industry?
I think definitely getting things done during the day can feel like an effort. When you have work in the afternoon and you wake up at midday, you can get into this cycle of work, sleep, repeat. It’s a bit of an adjustment becoming almost nocturnal. I find getting decent coffee in Perth past 3pm a nightmare too.

Tell us about the Perth bar scene, what does it mean for you?
The Perth hospo scene is super tight-knit, it’s really cool to see how all the venues help and support each other. There are also so many venues that have just opened or opening as well, that are really revitalising the culture in Perth. It’s really amazing, not just for hospitality, but for the general public as well.

Are there any bars overseas that are on your hitlist?
I’m super excited to be able to travel again! I’d love to be able to go back to New York. I wasn’t able to visit bars when I went (not sure I would appreciate an Elote Old Fashioned at the age of eleven anyway), so going to Brooklyn and visiting Clover Club and Leyenda would be epic. French 75 in New Orleans would have to be a go-to stop as well.

Do you have any mentors or people that you really respect in this industry that have helped you along the way?
I love everyone I surround myself with in hospo. I would definitely say Sil Tsagaris and Xander Stucken are big inspirations, they’ve taught me so much of what I know and Hayden Carter who’s passion is infectious, not to mention a blast to work with. Also the Mix Haus and Mechanics crews are awesome to work closely alongside and are absolute legends, obviously.

Where do you see yourself in five years?
In a few years, I want to still be learning and growing no matter where hospitality takes me. I hope to be just like the people that currently inspire me and eventually be that inspiration for someone else. I also want to have at least three cats.

If you could have a drink with someone (alive or dead) who would it be and what would you be drinking?
I’d love to have a gin and tonic or two with Phoebe Waller-Bridge. But definitely alive, not sure she’d be all that talkative if she was dead.