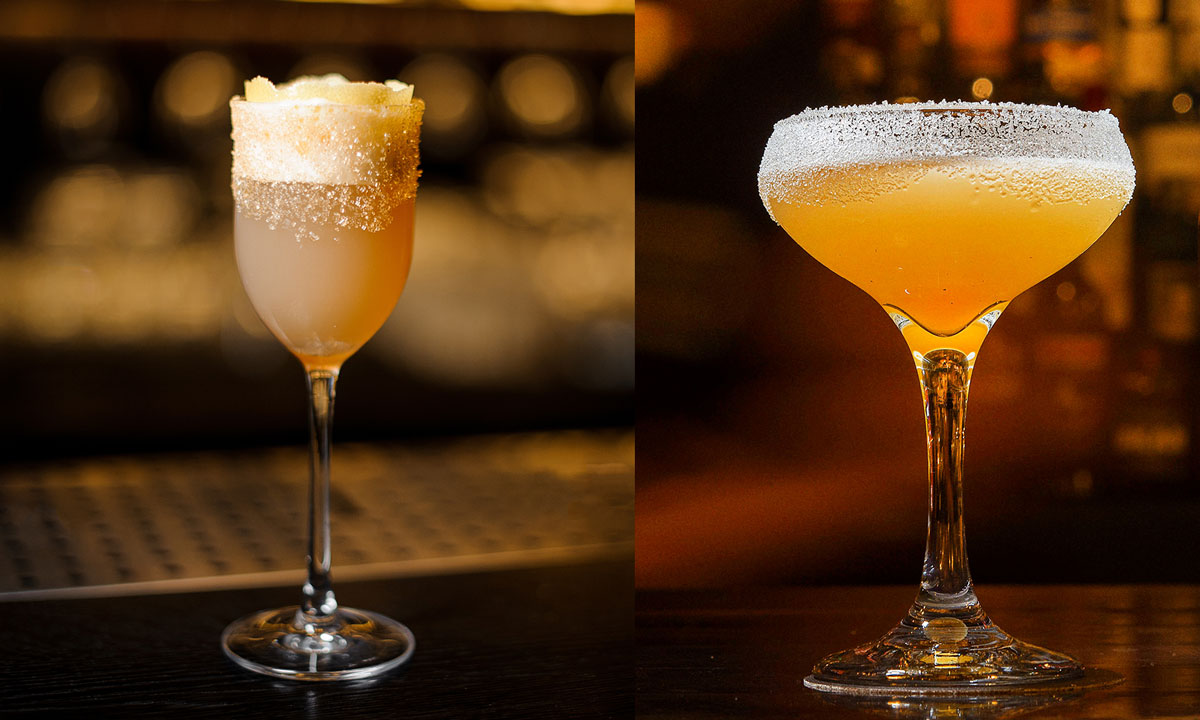 Story by Cara Devine. Cara is our Melbourne-based drinks writer. She is the manager of Bomba in Melbourne and the face and talent behind the cocktailing youtube channel Behind the Bar. You can email her at behindthebarchannel@gmail.com

Walking down Bourke St. the other day, bundled up and heads bowed against the wind, my friend (also from Scotland) caught a glimpse of the David Jones display window – it was bright and sequinned, designed to buoy against the miserable Melbourne weather. “Christmas!” she said excitedly and our collective hopes rose for a second before we both remembered that there’s nothing to look forward to in an Australian winter. Except for brandy. We went and got a Sidecar. But I kind of wish it had been a Crusta.

Brandy’s raisiny richness has always been something to return to in the colder months; a comforting hug. You can drink it neat, of course, but when it comes to mixed drinks there are really only two seminal brandy cocktails: the Brandy Crusta and the Sidecar (OK, there’s the Alexander but we’ll get to that another day). So what’s the difference? On paper, very little. Their ingredients lists are incredibly similar – brandy, lemon and orange liqueur. But, in reality, they’re cut from a different cloth.

When Jerry Thomas first put cocktails, at the time a new phenomenon, down onto paper in 1862 he made a distinction between ‘plain’ drinks and ‘fancy’ drinks. The Crusta was invented in the 1850s in New Orleans by an Italian bartender named Joseph Santini and it fits firmly into the ‘fancy’ category with its over the top garnish of a sugar rim and large lemon twist. The recipe though, is actually very spirit forward – basically just an Old Fashioned with a squeeze of lemon to lift it up. Maraschino became a popular addition to the mix at the turn of the 19th century, something I wholeheartedly endorse to bring out the ripe fruit notes and lengthen the finish, and the overall effect is that of fruit cake. If you’re not drinking this wearing a paisley dressing gown while draped across a winged leather armchair, you’re doing it wrong.

The garnish is what it’s all about. Perhaps not en vogue in our sustainable times, but you need a whole lemon – Jerry Thomas says to peel the lemon as you would an apple – starting at one end of the lemon, peel round in a spiral to get the longest twist you can.

The Sidecar is a child of a different generation. It’s exact birthplace is debated – shocking in the world of cocktail history, I know – but safe to say it gained renown after World War 1 at Harry’s New York Bar in Paris and was inducted into the cocktail hall of fame with its inclusion in the seminal bartending book by the same Harry McElhone, ‘Harry’s ABC of Mixing Cocktails’.

The name of the cocktail is also disputed – some say it was named for an army captain who used to arrive at the bar in a motorcycle sidecar; others say it comes from the bartending practice of pouring any excess cocktail from the shaker into a little shot glass to the side once the cocktail glass was full. The original recipe, though, was actually equal parts brandy, lemon and orange liqueur. It sits firmly in the Sour or Daisy family of cocktails (depending how pedantic you’re being) with the citrus being a prominent flavour. Rich and warming, but still refreshing, it is the go-getter of the two.

Now we get into the controversy… the original Sidecar did not have a sugar rim, but it does seem to have inherited one as time went on. In the equal parts recipe it wouldn’t have needed one, but modern recipes tend to up the brandy to more classic sour proportions so if you use a dry, zingy orange liqueur (looking at you Marionette curacao) then a little added sweetness is certainly welcome.

Either way you can’t really go wrong. Winter has come, the nights are long. Try them both every which way and see where you land – brandy is your buddy.