Explainer, Featured, Recipes
2 weeks ago
by Our Sponsors
0 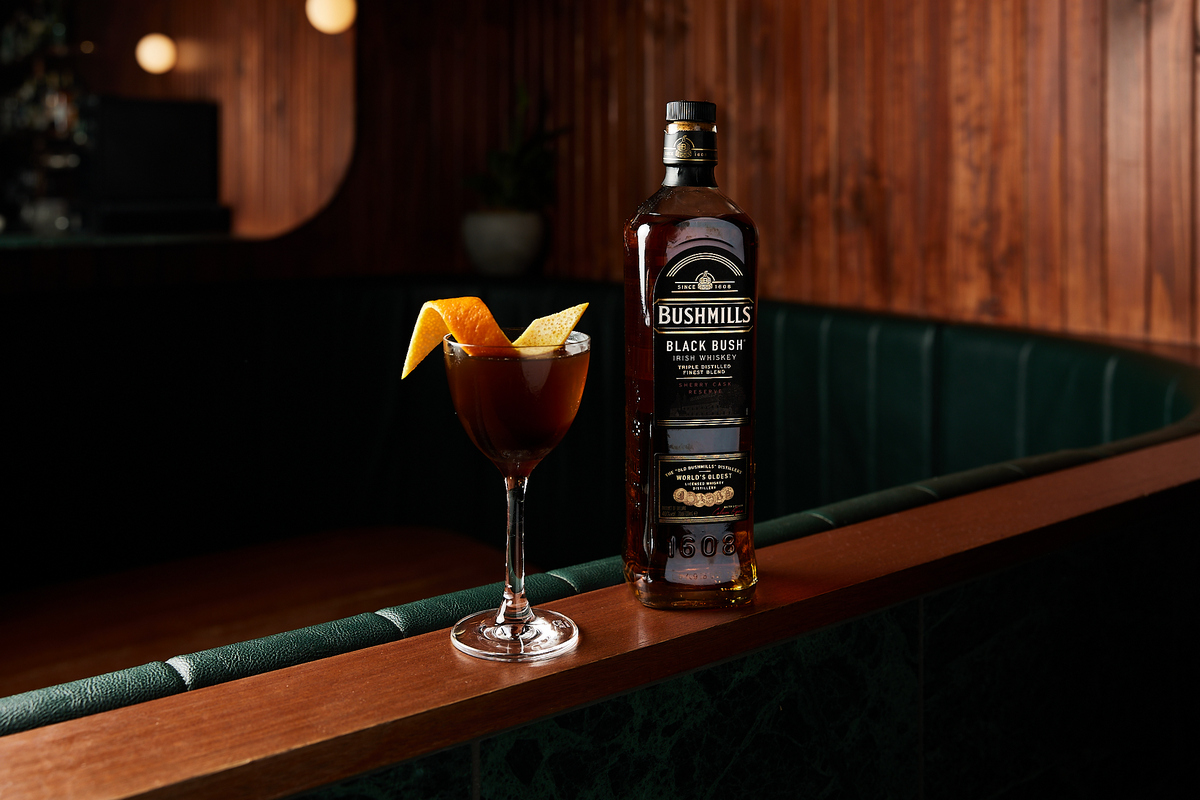 Situated on the north coast of Ireland, along the pure waters of the river Bush lies the world’s oldest licensed whiskey distillery, Bushmills.  For over 400 years Bushmills has refined and perfected the art of whiskey making, making it one of the most distinguished brands in Irish whiskey.

With its velvety, fruity character and deep Oloroso Sherry notes, it’s no wonder bartenders are reaching for Bushmills Black Bush whiskey as their go-to for cocktails. This blended Irish whiskey combines an exceptionally high amount of malt whiskey married with a lighter grain whiskey which elevates its flavour profile and sets it apart from other blends. It then undergoes an aging process of up to 8 years in rich Spanish Oloroso Sherry Casks and sweeter Bourbon Barrels to ensure a full spectrum of flavour. This unique recipe means Black Bush has rich, fruity notes and a deep intense character, balanced by an incredibly unique smoothness and perfect for a broad range of cocktails.

Hayley Dixon, Proximo Spirits Specialist says “The versatility of Black Bush has always set it apart from other Irish blends for me, long before I worked for the company. It has the richness, and viscosity to steal the show in a cocktail or play brilliantly in the background.”

We teamed up with some of Australia’s finest cocktail venues to chat about what makes the best cocktail whiskey, and to bring you a collection of curated cocktails created using Bushmills Black Bush Irish Whiskey.

Hayley Dixon, Proximo Spirits Specialist says: “The versatility of Black Bush has always set it apart from other Irish blends for me, long before I worked for the company. It has the richness, and viscosity to steal the show in a cocktail or play brilliantly in the background.”

As one of Australia’s most awarded venues, The Everleigh has a refined focus on consistency and doing things well, day in and day out. As bar manager, Oscar Shaw often jokes with guests who haven’t visited the venue in years “Don’t worry, nothing has changed”. That is the beauty of a well-made, quality classic cocktail and bar – they don’t need to. Therefore, it is no surprise that their Bushmills Black Bush creation is a measured approach, minus all the bells and whistles, just a simple drink that tastes damn good. The secret to the Irish Dominicana is its boozy coffee-stirred down base that is exemplified by the honeyed Bushmills Black Bush and perfectly balanced with a fresh cream float.

It won’t come as a surprise that the combination of coffee and Irish whiskey proved to be popular!  We spoke to Matt Holding, managing partner at Malt & Juniper in Adelaide. We were keen to find out what his favourite classic Irish Whiskey cocktail was, his hot tip being, the Irish Coffee served at Dead Rabbit in NY. Matt’s cocktail ‘Black Label One’ – a cheeky reference to how Black Bush got its name as consumers continuously refer to it as the ‘black labelled Bushmills’ – it’s a celebration of the honey, vanilla, and sherry notes present in Black Bush.  Presented as an amplified take on the Manhattan, in a venue that prides itself on showcasing a large selection of malt and juniper from around the world. You can be sure that this one will hit the Irish whiskey spot!

A new venue making its mark in Victoria and with its very own waterfall, is Yarra Falls. Owner, host, bartender, and all-round legend Brendan Keowan is no stranger to Bushmills, having grown up a short distance from the distillery. Yarra Falls heroes the land along the river through their drink creation, stories, and music. We spoke to Brendan about his love of Bushmills and why it is his go-to house pour whiskey, “Black Bush is a phenomenally good value drop: you can pour it in rail; the sherry cask makes it soft and approachable for sipping and it is a versatile whiskey in cocktails’. His cocktail ‘Cold Season’ features recently ripened riberry and gutyamul, which is the indigenous name for paperbark. Inspired by artefact-making season on the land surrounding Port Phillip Bay, it is a cocktail encompassing rich local history.

Brisbane venue Mrs. Jessica Rabbits is no stranger to whiskey libations. A quick chat with bar manager James Hughes will transport you down the rabbit hole, into a world of creativity. As James states “You can walk into JRs and forget about time, just let the drink mind it for you.” His drink ‘The Horologist’ – someone who specialises in the study of time – is a little nod to Bushmills, having stood the test of time (over 400 years) and features a black garlic and toasted barley fermented honey, yes please! When looking for the perfect house whiskey James looks for the rich, bold flavours of Black Bush, that don’t compromise other flavours.