It’s flair bartending before there were TGI Fridays and Bryan Brown and Tom Cruise. It goes way back, all the way to the time of the professor, himself, Mr. Jerry Thomas in the 1850s.

What am I talking about? Blazing, of course. The empirically entertaining (and reasonably reckless) art of throwing liquids that are alight between two vessels, with the aim of impressing one’s guests and serving a drink.

It was the flairtending of the mid-nineteenth century after all. Drinks historian David Wondrich really brought the practice to life in his book, Imbibe. In it, he describes the genesis of the Blue Blazer and its signature technique: a huge bear of a man “stomps into the El Dorado [where Thomas worked] and roars ‘Bar-keep!… Fix me up some hell-fire that’ll shake me right down to my gizzard!’”

When the bloke returns to Thomas’ bar, he’s pouring ribbons of fire between two cups, and serves up the drink which, no doubt, hit the bear of a man in his gizzard.

Now, whether or not that story is true — we’d wager it’s not — what worked in the 1800s still works today. We are, after all, simple animals, and we love the look of something on fire — some more than the rest of us, of course, like the neighbour I had growing up, who in the afternoons after school would mix up a batch of DIY napalm for kicks.

Some just want to watch the world burn, right?

If you head down to the Sydney outpost of Mjølner, you’ll be able to watch as the bartenders there give their take on the Blazer a burn.

For theirs, given the Scandinavian influence of the place, they take the Scandi version of mulled wine — know in those parts as Glögg — and proceed to apply Thomas’ Blue Blazer technique to the drink.

The result? You get a punchy, hot drink and a show at the same time.

Should you wish to give it a go yourself, you’ll need some handled tins, and some properly boozy booze. But you’re best advised to give the technique of pouring between tins a go with cold water first, to get the action down.

Once you’ve mastered that, turn the lights down low, and light it up. It is, after all, all about the show. 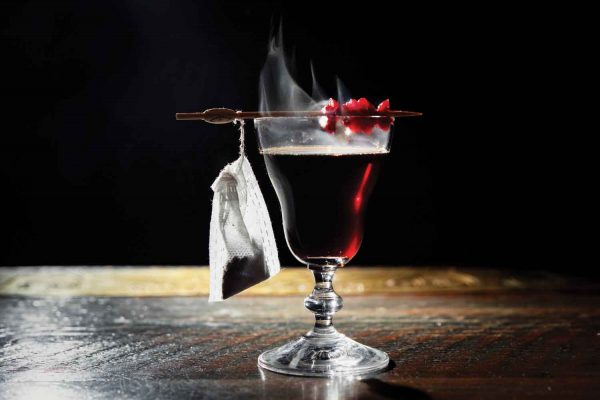 Got a great venue idea? Speakeasy’s Pathway to Partnership program is looking to fund it