Dusting off a recipe from David Embury’s The Fine Art of Mixing Drinks we get the feeling that the Brooklyn Cocktail didn’t leave a lasting impression on him:

“…even in Brooklyn there are at least five to ten times as many Manhattans consumed as there are Brooklyns. Try them both and you’ll understand why.”

We can guess that Embury feels that dry vermouth isn’t a natural partner to Bourbon or rye, but if you had a go at making last month’s Scofflaw Cocktail you’ll know that there are exceptions. Regardless of whether the Brooklyn’s formulation works or not the addition of hard to source Amer Picon (a bitter cordial made with orange, gentian, and other ingredients) makes the concoction rather difficult to recreate. 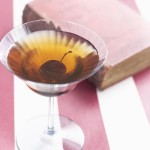 Finding reliable sources for the Brooklyn and Queens cocktails is not easy. While unearthing the origins of most classic drinks is anything but simple, these two are lacking the necessary popularity to for their story to be well documented. What we can be certain of, however, is that they start to make an appearance in the years following the Repeal.

Recipe adapted from The Fine Art of Mixing Drinks by David A. Embury