This feature appeared in the May issue of Australian Bartender

Whipping up a brace of buttery smoke
By Gary Regan

The drink starts out with Peat Monster, what’s known as ‘pure malt’ or ‘vatted malt’ and made up of several single-malt scotches mingled in one bottle. This is different from blended Scotch, which employs ‘grain whisky’ – a product with very little flavour – along with a number of single malts.

There are a number of pure malts on the market. Johnnie Walker’s Green Label is probably the best-known example; Sheep Dip is another. The Peat Monster is produced by Compass Box, an innovative company in the United Kingdom headed by a passionate American guy name of John Glaser.

There’s some of their brandy in the following cocktail too, so you’re about to encounter a drink that calls for ingredients that I hold in very high esteem. Hopefully, if you taste this baby, you’ll understand why.

The creator of Butter, Lemon, Smoke, the drink you’re about to meet in print, is T.J. Vytlacil, a bartender-owner at the Blood and Sand in St. Louis. The customer he made it for gave it its name.

“He is a local musician,” T.J. says, “and (he) told me he likes spice, smoke, citrus and softness. Great descriptors, considering he had never really been a cocktail consumer.”

After T.J. put the drink together, his guest tasted it and said that it tasted like butter, lemon and smoke. “That’s how he orders it now, and the drink has become a fun staple at our bar,” says T.J.

Before we get to the recipe, I need to spout a little more about the Peat Monster. It’s such a startlingly fabulous whisky. Most peaty drams from Scotland, though certainly not all, tend toward gruffness, but the Peat Monster is far more austere than that.

There’s whisky from the islands of Islay and Mull in this bottling, and island whiskies are usually known to lean toward peaty. But there’s also some very elegant Speyside malt in the Peat Monster, too, and that’s the whisky that seems to calm the storm. 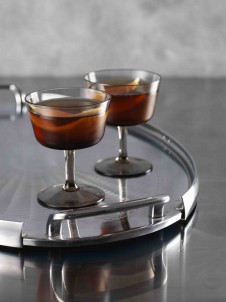 *In a cocktail shaker stir the Scotch, brandy, Chartreuse and Benedictine together over ice. Strain into a chilled cocktail glass and garnish with the lemon twist.

Adapted from a recipe by T. J. Vytlacil of Blood and Sand in St. Louis.