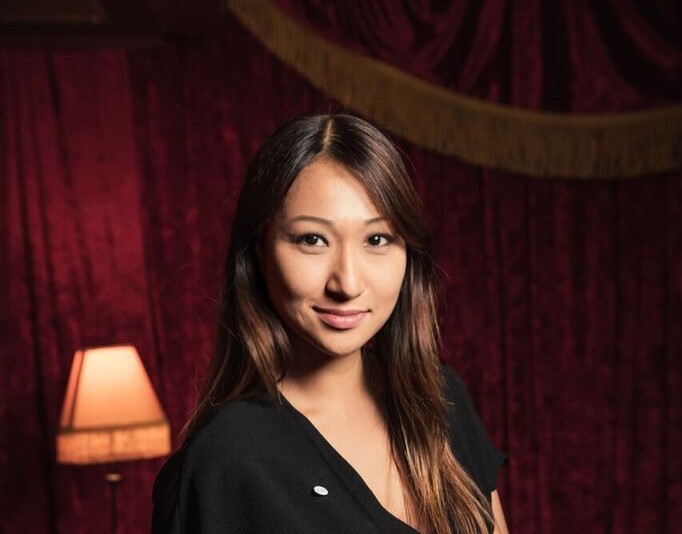 Story by Natalie Ng, owner of Sydney bar Door Knock and all around legend. You can reach out to Nat @nat_nsc or @doorknock_sydney.

What a time to be alive.

Being in hospitality during Covid feels like having anxiety wrapped in a false sense of security. The weeks leading up to Lockdown 2.0 were some of the busiest weeks NSW had experienced in a long time (and some newer businesses were busier than ever before!). We were all feeling optimistic that things were taking a turn in the right direction, until it was taken away, almost overnight.

Where did this leave us? Still pretty confident to start, most venues had the infrastructure from the last lockdown to offer delivery and takeaway services, and personally, I thought this time round it would be easier. We were more prepared for what to expect, and two weeks did not seem like the end of the world. Even with a second extension, there was a lot we could do to survive. The lack of Job Keeper and Job Seeker was definitely a big issue, but with the government eventually fumbling through a roll out of weekly cash at a relatively acceptable amount (not just residents this time round!) I remained hopeful that we would open doors and resume trade in under a month.

“We were all feeling optimistic that things were taking a turn in the right direction, until it was taken away, almost overnight. Where did this leave us? Still pretty confident to start, most venues had the infrastructure from the last lockdown to offer delivery and takeaway services, and personally, I thought this time round it would be easier.”

None of us imagined how deadly this Delta strain would be, and how quickly it spread throughout the community. It was a slap to the face that we possibly deserved for dropping the ball. Delta, combined with a poorly executed vaccine roll out (and some even poorer behaviour by certain individuals) meant that the lockdown was only going to get worse. Longer lockdown, more restrictions, more uncertainty for businesses and the residents of NSW. To all the customers that gave us grief about checking in, and to those that protested for “freedom”, thanks a bunch. Now we are all in this myriad of uncertainty together.

But what this hardship and the previous lockdown has taught us, is that above everything else, we (the members of the hospitality community) are a scrappy bunch. We pivoted efficiently as a whole, even inventing unique ways, outside of deliveries, to digitise our guest and drink experiences. From virtual whisky tastings to trivia nights, there is no doubt this industry was built on a zest for interaction and a love of creativity. 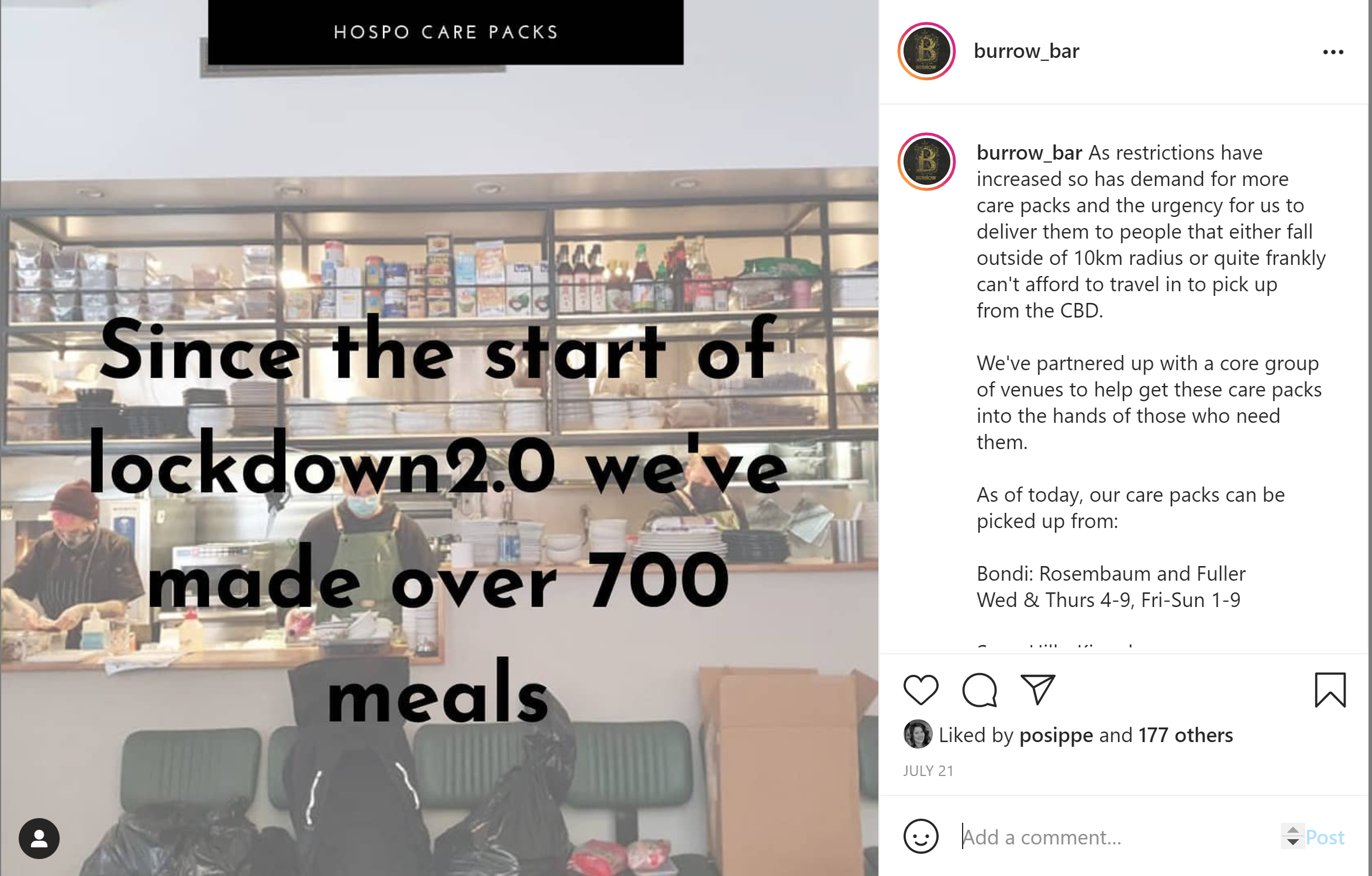 Many bar owners and operators jumped to help the community. Chau Tran and the crew at Burrow Bar have, in under 5 weeks, insanely managed to get more than 600 meals out across Sydney. More venues and people jumped on board to help spread this love further and wider, with Burrow staff meals spanning as far as the Northern Beaches and Parramatta. This type of real altruism is contagious, with suppliers and brands jumping on board to donate stock, gift cards and even their personal time to help out.

The Australian Venue Co. have made thousands of their Meals for Hospo Mates available for pick up from Bungalow 8. Sabrina and her gang at the Duke of Enmore have a meal and a shot ready for you to pick up daily. The list of help goes on. At Door Knock, we opened our doors once a week to give out pantry staples, toiletries, groceries and take away drinks thanks to generous regulars and suppliers. Once it got too hard with lockdown restrictions tightening in certain suburbs, we sent out gift cards instead. They obviously didn’t go as far.

Luckily for us, Perth came to the rescue! Thanks to the brilliant mind of Brendan Scott Grey, BA for Beam Suntory’s The Exchange, a fundraiser was organised. The legends at Mechanic’s Institute Bar lead by Murray Walsh, hosted the epic fundraiser and raised an unbelievable 13k for the Sydney Hospitality community! To have this kind of support from the hospitality community located so far away from us, I swear a few tears of gratitude (and jealousy!) were shed. Jealousy because it seems like forever since we had a good industry party in NSW, which no doubt always ends up hilariously weird! Who thought that one might actually miss getting lay backs from a hairy shirtless bartender.

“Luckily for us, Perth came to the rescue! Thanks to the brilliant mind of Brendan Scott Grey, BA for Beam Suntory’s The Exchange, a fundraiser was organised. The legends at Mechanic’s Institute Bar lead by Murray Walsh, hosted the epic fundraiser and raised an unbelievable 13k for the Sydney Hospitality community!”

Having personally reached out via socials and to as many owner-operators as possible, I collated a list of 200 hospitality workers (so far), that have either reached out for help or sure as hell deserve some for being legends in their own right. Door Knock distributes the pantry items and all sponsored drinks. We have partnered with the equally fabulous Steven Serrano (owner of Steve’s Easy Squeeze), who will use their logistics to source fruit and veg, pack everything together and deliver each package on our behalf. Talk about hospo helping hospo!

This is what hospitality is truly great at. Helping each other, being kind when it matters, and rallying together during tremulous times. There is no space for arrogance or shit attitudes. Let us just be thankful that we are also privileged enough to live in Australia. Yes, the government has made mistakes (like they all do!), but there are many other countries and people doing it so much worse. Next time anyone thinks of complaining, I urge you to look at how messed up things are in my hometown, Malaysia.

If Covid has taught us anything, it’s to be more tolerant and realise that nothing is for certain. We are a resilient community. I choose to believe that we will yet again bounce back stronger than ever, so remember to support each other and check on those around you.

Here’s to having lots of Tequila in person sooner rather than later, Salud!

“Is it like a first drafts pick in in the AFL, becoming captain in the same year?” Melanie Hack on rapid career progression and industry-wide staff shortages