If you’ve been looking at cocktail menus lately, you may have noticed a term popping up that you wouldn’t necessarily think belongs on a drinks list: lacto. Lacto fermentations are gaining currency in bars around the country, and that’s in part thanks to the popularity of the latest book from Danish restaurant, Noma, The Noma Guide to Fermentation.

Bulletin Place’s Evan Stroeve agrees with that — you can read up here on what he has to say about fermenting more broadly — but also puts it down to the ease with which bartenders can get started.

“It’s probably the most accessible [fermentation] both for bartenders and for consumers,” says Stroeve. “Essentially what it is, it’s yoghurt whey, macadamia milk, coconut water, some almond, and raw sugar. And basically all the lactic acid in the whey converts the sugar into lactic acid — it’s a lacto ferment. You combine it all in an anaerobic environment — which is an oxygen-free environment — like a vacuum pack, and you give it a couple of days and watch it slowly expand. That’s the CO2 that’s the byproduct of that enzymatic conversion.”

The smart think about this is what they do next.

“What we do with it, was take a raw honey which you’d normally dilute with water, and what we did was dilute it with [the lacto ferment] so that you have a lacto macadamia honey syrup. Pop a bit of gin and lemon in that and you’ve got a Bees Knees with a bit of funk to it,” Stroeve says.

Essentially they’ve hacked that one ingredient which you’ll see behind many bars, honey, and added extra complexity to it by getting this work done behind the scenes.

Take a look at their Bee Sting recipe below (which is one of the more delicious drinks we’ve had this year) and check the notes for their lacto recipe. 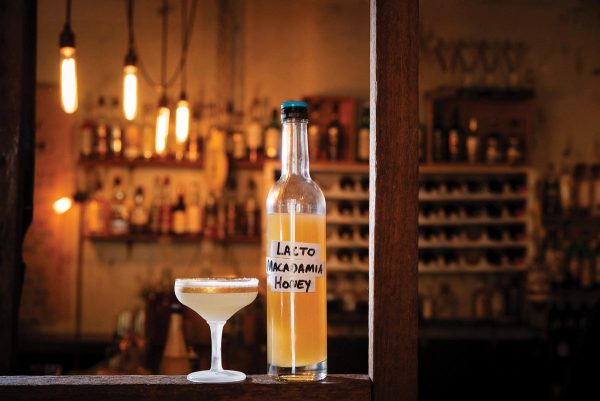