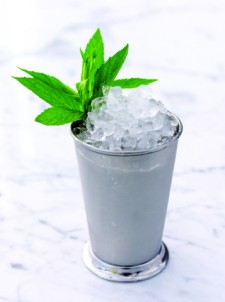 “When all is ready, assemble your guests on the porch or in the garden, where the aroma of the juleps will rise Heavenward and make the birds sing. Propose a worthy toast, raise the goblet to your lips, bury your nose in the mint, inhale a deep breath of its fragrance and sip the nectar of the gods.” – Excerpt from a letter from Lieutenant General Simon B. Buckner, Jr., USA to Major General William D. Connor dated March 30, 1937. Buckner Jr was known to have served this family mint julep recipe to President Franklin Delano Roosevelt.

Sounds delicious, doesn’t it? So why don’t more people drink it? Well if you don’t like Bourbon this isn’t the drink for you but this simple combination of Bourbon, sugar, mint and ice is no pushover; it’s the official drink of the Kentucky Derby (a dubious honour you’ll discover); the pre-cursor to the cocktail du jour the Mojito; and a damn fine way to enjoy America’s native spirit.

The word ‘julep’ is actually derived from the arabic word ‘julab’, which means ‘rosewater’. It is said that centuries ago there was an Arabic drink called a julab made with water and rose petals. Its fragrant qualities made it popular throughout Europe and when it made its way to the Mediterranean the locals switched the rose petals for the more abundant mint. This then traveled through Europe where it was paired with Cognac or Peach Brandy. The combination of hot American summers and a new style of whiskey – Bourbon – fuelled the birth of the Mint Julep in Kentucky sometime in the 1600s (although no one’s too sure). Some even say that farmers drank it like we drink a coffee today, first thing in the morning for a bit of a kick

Sadly, the Americans have deviated far from these great traditions. As the pride and joy of Kentucky, the Mint Julep has become synonymous with the famed Kentucky Derby, a huge horse racing carnival held at Churchill Downs every May. It became the signature drink of the Carnival in 1938 when they started to sever the pewter glasses as souvenirs for 75 cents.  Today, more than 80,000 juleps are served over the two-day event. But don’t get all misty-eyed. These days the official Mint Julep of the Kentucky Derby is ‘The Early Times Mint Julep Cocktail’, a cloying ready-to-serve mix of whiskey and mint-flavoured syrup. Sadly, these inferior offerings have led to the demise of the Mint Julep and after trying one of these dismal concoction many swear they will never drink a Julep again. But when made properly; with good quality Bourbon and fresh mint, it is a sublime drink on a hot day and should not be forgotten.

The traditional serving of this drink in the Deep South was as much about the ceremony as it was the drink itself. It was served to family and guests on a hot summer afternoons with the greatest fanfare and flourish to show respect for those receiving it. The recipe varied from home to home. Just like everyone’s Mum has their own take on a bolognese sauce… you get the idea. In fact, in a 1936 copy of Irvin S. Cobb’s Own Recipe Book, he says, “…well, down our way we’ve always had a theory that the Civil War was not brought on by Secession or Slavery or the State’s Rights issue. These matters contributed to the quarrel, but there is a deeper reason. It was brought on by some Yankee coming down south and putting nutmeg in a julep. So our folks just up and left the Union flat.”

The key thing to remember when putting together a mint julep is the quality and freshness of your ingredients. Use a good quality Bourbon and fresh mint and ensure you don’t over-sweeten the drink. Remember, the Bourbon is the star of this drink, so let it shine.

Gently muddle mint, sugar and a dash of  water in a Julep cup. Add Bourbon and leave to stand for a couple of minutes – this will allow the mint flavour to infuse the spirit. Half fill the glass with crushed ice and stir well. Fill the remainder of the glass with crushed ice. You will know your julep is ready when bits of ice cling to the side of the glass. Garnish with a mint sprig.