Featured, Products, Recipes
1 month ago
by Our Sponsors
0

Beeswax and Olive Gin will be Never Never’s twelfth Dark Series release, a limited edition collection that has quickly established a cult following for its bold flavours and innovative spirit direction.

“We love what Maybe Sammy do, as do thousands of Sydney-siders who have passed through those doors,” says co-founder and Brand Director Sean Baxter. “They know how to generate the best flavour in Australia so it made sense to build a new gin with them,” says Sean.

“We love the martini, it’s the basis of so much of our success at Maybe Sammy,” says co-founder and head of the Lobby Boy Union at Maybe Sammy, Stefano Catino. “We wanted something that was going to be delicious but work well in the drinks we love to make,” he says.

Stefano and Sean are old friends who always dreamt of collaborating together, ever since they first started building their businesses. “There are so many new gins entering the market now”, says Sean, “it needed to be something that was personal, that connected to what Maybe Sammy is all about and cut through all the noise out there.”

Stefano and Sean are old friends who always dreamt of collaborating together, ever since they first started building their businesses. “There are so many new gins entering the market now”, says Sean, “it needed to be something that was personal, that connected to what Maybe Sammy is all about and cut through all the noise out there.”

“Stef has always been a passionate advocate of his Italian culture, his passion is there for all to see,” says Sean. “We wanted to celebrate that specialness and find something that would connect to him as much as it connects to us,” he says. “We started looking around McLaren Vale for an ingredient that would excite him,” Sean says.

“That’s when we heard about the bees”.

“These bee’s would have been commonplace in Stef’s hometown of Vernazza in the Ligurian region of Italy for thousands of years,” says Sean. “Unfortunately Purebred Ligurian bees have been eliminated from their traditional home as a result of interbreeding and disease,” he says. “These bees have been happily making honey and wax in the isolated fields of Kangaroo Island since 1885,” says Sean. “In that time their produce has been life sustaining to those inhabitants who would have cherished their beautiful bounty.”

“When we showed Stef, he was so overwhelmed, he had never heard of the bee colony and it was like bottling a little part of his homeland that had survived and thrived here in Australia,” says Sean. “Much like him,” he smiles.

The gin also uses olive brine sourced from Lloyd Brothers Olives which is located around the corner from their McLaren Vale distillery. This brine is packed with savoury flavour and combines beautifully with the sweet floral notes of the wax and raw honey.

“The brine plays a really important role in the complexity of the gin,” says Baxter. “It acts like salt on caramel, it adds a slight savoury note while pumping up the honey characteristics,” he says. 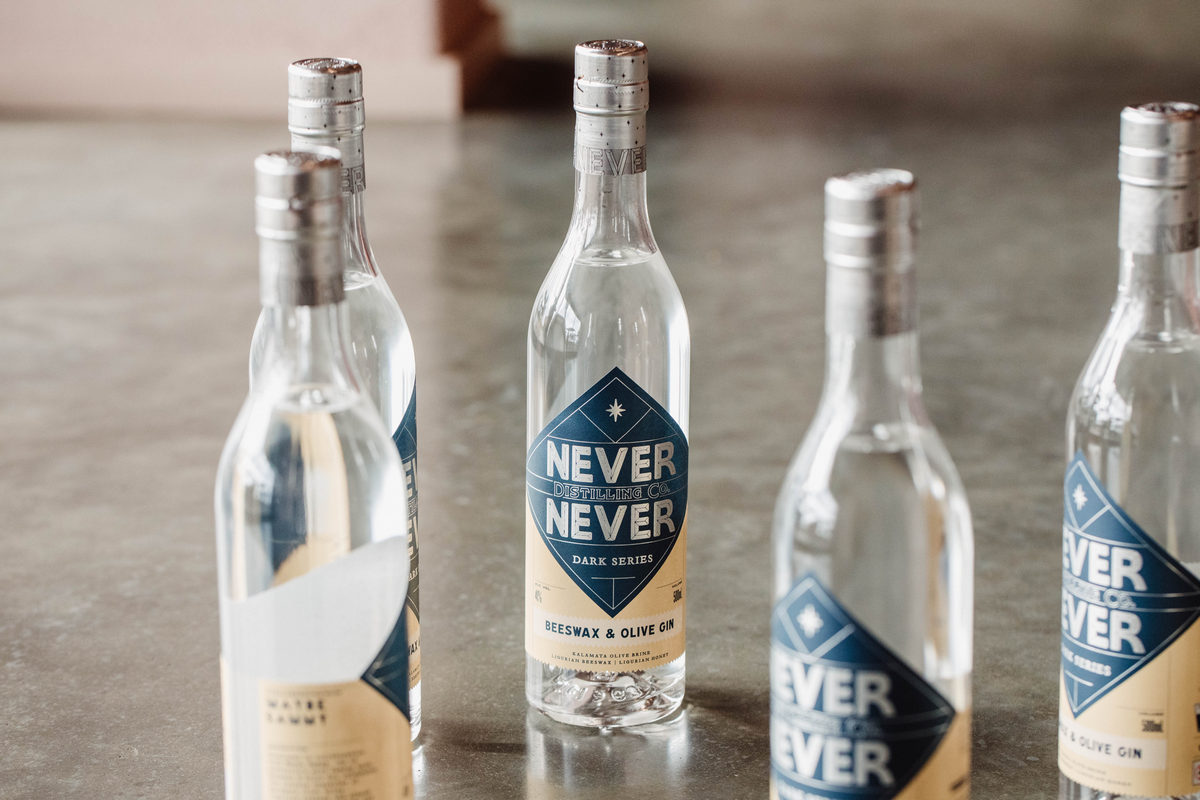 “When used in a martini, the waxy mouthfeel carries the other botanical complexities and links perfectly with the olive or citrus garnish, whatever direction you prefer,” says Sean. “We also love the way it behaves in a Bee’s Knees or even a simple highball. It’s as versatile as it is delicious.”

“When used in a martini, the waxy mouthfeel carries the other botanical complexities and links perfectly with the olive or citrus garnish, whatever direction you prefer. We also love the way it behaves in a Bee’s Knees or even a simple highball. It’s as versatile as it is delicious.” – Sean Baxter

“For us, it’s the perfect embodiment of what we wanted to achieve, the Never Never team have done such an amazing job of creating something so special,” says Stefano.

The Beeswax and Olive Gin will be exclusively available to Maybe Sammy over the next few months with venues expecting to get their hands on it at the beginning of October.

A launch party for the gin will be happening on Sunday 17th of July from 5pm for all those interested in sampling some of the incredible cocktails that Maybe Sammy has created with it (with many more to come).

You can also get your hands on the gin by purchasing through the Never Never website when it goes live on the same day.

Sean had long been a fan of sitting at the bar of Stefano’s first venue, Maybe Frank and eating his body weight in pizza.

In 2017 during Sydney Bar Week, Never Never launched their brand to the east coast of Australia at that same pizza joint in Paddington.

After the launch, Maybe Frank became an impromptu storage facility for the remaining Never Never stock, bartenders would stop past for a slice and a cocktail and leave with a bottle of gin that Stef had managed to sell to them.

Sean would get a text message, “Hey Seany, you had better send Jamie an invoice he took a whole case”. It was the early days of selling booze out of the boot of a car, and it was people like Stefano who helped turn Never Never into the brand celebrated by bartenders all across the country.

Never Never Dark Series Beeswax and Olive Gin launches to subscribers on Sunday the 10th of July before being released online through the Never Never website & distillery door from the 17th. You can subscribe to the Never Never mailing list by visiting their website and scrolling to the bottom of the page.

For those keen to range the gin, keep an eye on your local wholesalers from the 17th of October when it becomes available nationally.

For more information about Never Never’s Beeswax and Olive Gin check out www.neverneverdistilling.com.au or reach out to your friendly neighborhood Proof and Company representative.

Honeysuckle and orange blossom leap out of the glass, with pine needle and orange zest sitting just behind. The palate is rich and creamy, reminiscent of salted honey and drizzled olive oil, punctuated by bright accents of brine, sweet basil, bay leaf and fresh orange. The finish is long and buttery with toasted almonds and warm cooking spice. 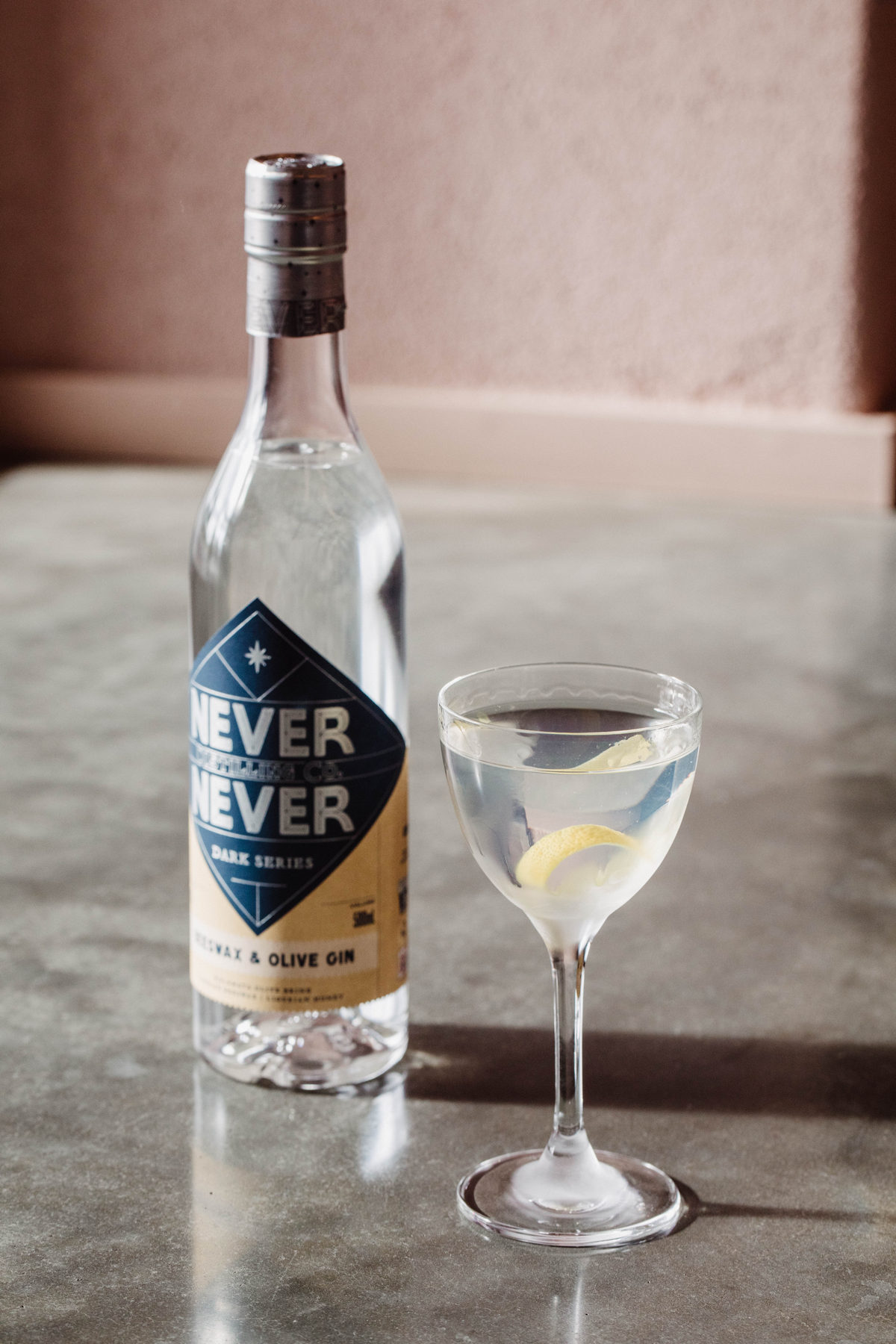 Never Never Distilling Co. have announced ‘Step Into the Never Never’ is back for its second year