This article featured in the August issue of Bartender magazine 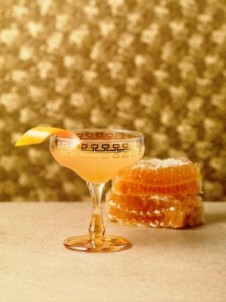 Sticky, unctuous and sweet – honey has been humankind’s sweet treat for thousands of years. Ancient cave paintings in Valencia, Spain give evidence of humans collecting honey as long as 9000 years ago with corroborative evidence pointing to ancient Egyptian, Middle Eastern, Chinese and Mesoamerican peoples all being sweet on the honeybee’s handy work.

Honey’s allure is as ancient humanity’s love of the intoxicating affects of alcohol with evidence of mead (honey wine) dating back to 7000 B.C. During the Middle Ages monks were renowned beekeepers and didn’t only look to produce mead but used honey as a sweeting agent in their various spiritous medicines and herbal liqueurs. In fact, before the establishment of sugar plantations in South America and Caribbean in the 16th century honey was the most easily accessible and prized sweetener going.

The sugar industry still remains big business today. And behind the bar refined sugar plays an important part in balancing the citric acid found lemon and lime juice or simply taking the edge of strong spirits. Sours, punches, cobblers, old fashioneds and more call for sugar but that doesn’t mean you should neglect the original sweetner.

The Airmail, Bee’s Knees and the Brown Derby # 2  – featured below – are some fine examples of what can be achieved in cocktails with honey. Honey has the same relative sweetness as sugar but it also imparts a gentle, slightly floral flavour which is simpatico partners to any variety of spirits.

There are a couple of Brown Derby’s about. The one featured here is often referred to as the #2  version and is attributed to a defunct Hollywood restaurant chain of the same name. It is however, unlikely that the Brown Derby restaurant invented this tipple especially as a cocktail by the name of De Rigueur appears in Harry Craddock’s Savoy Cocktail Book with a remarkably similar formula. Whatever the case, Los Angeles’ bars now celebrate the Brown Derby as one of their own. And why not? It’s a tasty enough tipple that you’ll want to claim one for yourself.

Add all ingredients to a shaker and shake briskly. Garnish with a grapefruit zest.

0
Australian Bartender August 3, 2012
No Comments Yet

Wild Turkey Into The Wild: a one of a kind bartending trip with Eddie Russell

5 American cocktails worth checking out

The rookies guide to bourbon and rye

Wrap your lips round a Whiskey Tango