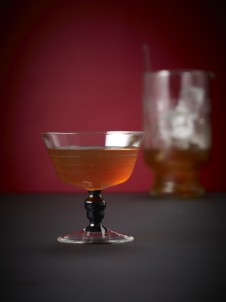 This article appeared in the August issue of Australian Bartender. The Cocktailian is reprinted with the kind permission of the San Francisco Chronicle. Gary is the author of the Joy of Mixology, among other cocktail and spirit related books. Visit his website and sign up for the free Ardent Spirits newsletter. You can contact Gary at gary@ardentspirits.com

There’s a cocktail that, despite being fairly pedestrian in nature, just won’t seem to go away. It’s called Satan’s Whiskers, and I’ve a suspicion that its name has a lot to do with why the drink has stood the test of time.

“Barkeep! Gimme Satan’s Whiskers, and be quick about it, will ya?” is the sort of request that’s bound to draw attention to the person placing the order at any bar.

Satan’s Whiskers, as detailed in the 1930s The Savoy Cocktail Book, calls for equal parts of gin, sweet vermouth, dry vermouth and fresh orange juice, half a part of Grand Marnier and a dash of orange bitters. It’s similar to a Bronx Cocktail with different ratios and a little Grand Marnier thrown in there, right?

William “Chili Bill” Eichinger, bartender at Finnegan’s Wake in Cole Valley, recently came up with a variation on Satan’s Whiskers for me. It’s a far cry from the original, and well worth the price of admission.

Bill calls his variation ‘Satan’s Whiskers marcelled’, explaining that a marcel is, “a deep soft wave in one’s hair, created with a curling iron; popular in the 1920s and 30s.”

This move really got my attention. I’m an aromatic bitters freak from way back.

Booze on my doorstep also tends to get my attention, so when a bottle of Mandarine Napoléon, another cognac-based French liqueur, arrived at my house recently, I decided to have a shot at my own version of Satan’s Whiskers. I call it ‘Satan’s Whiskers enroulée’; enroulée being the French word for ‘curled’.

I followed Bill’s lead on this one and went for aromatic bitters, and I’m pretty pleased with the result. The Mandarine Napoléon adds a nice tangy tangerine layer to the drink, and the bitters bring everything together quite nicely.

I also took the liberty of playing around with the formula for the original Satan’s Whiskers since I seemed to be on a bit of a roll with my enroulée version, and I found that, if I simply called for more gin, rather than pedestrian, Satan’s Whiskers can be rather intriguing. More gin tends to have that effect on many drinks, I think.

Place all ingredients in a mixing glass. Add ice, shake and strain into a chilled cocktail glass.

Adapted from the Savoy Cocktail Book.

0
Australian Bartender September 17, 2012
No Comments Yet