Not just to be discarded! 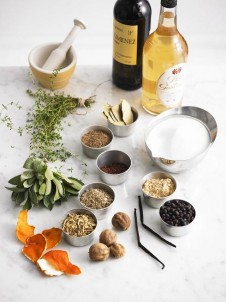 This masterclass appeared in the October issue of Australian Bartender.

It’s probably one of the most common ingredients in classic cocktails, however vermouth is most likely the stuff that you end up cleaning of your bar mats! It hasn’t always been this way, with the Vermouth Cocktail considered quite a hit back in the late 1800s, but sadly today you’ll not often hear, “Barkeep – a wine glass of dry vermouth, chilled and garnished with lemon. Up.” Hopefully however after reading this month’s Trend piece you’ll be more inspired, confident and determined to offer up a vermouth focused cocktail – or tasting flight – to your bar’s tipplers.

We’ve turned back the dial a bit for this Trend, and funnily enough we found our new Deputy Editor – Sam Bygrave – presenting a ‘How To’ on vermouth (July, 2011). “Making your own vermouth, you get a wonderful freshness to the herbs and spices,” Bygrave explained to us. Back when he was behind the bar top, Bygrave was a big promoter of offering vermouth straight up to punters so that they could try it in its own right.

“The hard part was countering most people’s perception that vermouth is something that should be thrown out of your drink!” Bygrave found he had great success with his bespoke offering finding that guests enjoyed, “trying the more inventive ones as a curio – it changes the way people think about vermouth.”

Dig out the issue or visit 4bars.com.au for the full recipe and how to put it all together, but here’s a starting list of what you will need to produce your own house-made rosso vermouth – why not give it a go?

Something a little bit fancy…

Simple enough to overlook, vermouth is perhaps the delicate backbone of a top-notch cocktail. True, it is often leaked, dripped, sprayed or syringed into the mixing glass in such miniscule amounts that the uninitiated cocktailian might underestimate its clout (it probably also ends up tipped across the bar floor).

Yet this aromatised wine can, when solo, be a delightful tipple – especially if you hunt down some of the more bespoke offerings on the local market. David Wondrich – our valiant Knight of the Cocktail and veritable high-proof professor – gives a good mention to the evolution of the Vermouth Cocktail in America stating in Punch!:

“Once people noticed vermouth and began playing with it, it was inevitable that sooner or later somebody was going to try and make a Cocktail out of it – We don’t know who served as guinea pig or where the experiment was conducted…but its protocol was recorded in 1869, in the invaluable ‘Steward & Barkeeper’s Manual’.

“[of the vermouth Cocktail]…there were plenty who appreciated its gentle touch – as an 1885 newspaper squib noted, “James R.Keene [Robber Baron and horseman extraordinaire] cheers himself to vermouth cocktails because ‘they don’t break you up.'”

The history of the cocktail however seems a short one and while the anonymous The Banquet Book published in 1902 did quip, “The cocktail is liked…and generally secures constant advocates,” Wondrich asserts that the drink began to fall from public favour from the turn of the 20th century.

It warranted a few mentions up until Prohibition however it would seem most tipplers were craving something a little more robust in their cup than a jazzed up glass of wine. Looking at the recipes on offer between 1869 and the 1887 Reprint of Thomas’ cocktail book, it seems Thomas adapted a some points from the original – namely substituting a single piece of ice for shaved ice, adding the method of shaking and straining and the addition of bitters. But like Wondrich said himself about the Cocktail – what the hell. Keep an eye on simplicity and high quality vermouth and you’ll muddle through.

This take on the deliciously tasty and simple vermouth cocktail can be found in Jerry Thomas’ Bartenders Guide 1887 Reprint, on page 22. There are two variations – standard or ‘fancy’ – the difference being in the cocktail bitters included (the fancy goes for Angostura while the standard elects for Bokers) and the addition of fresh lemon*.

If this is the sort of treat that tempts your cocktailing prowess then try to stick as close to the script. The use of shaved ice will chill and dilute the vermouth to a tea and should also give the drink a delightful misty opaqueness. The ‘fancy’ is a stunner to get people drinking and talking about vermouth in your bar.

One quarter slice of lemon

Method: Fill the mixing glass one-quarter full of shaved ice, shake well and strain into a cocktail glass; garnish with the lemon.

*There’s a slight change in how they’re prepared too, but that’s by-the-by today.

0
Australian Bartender November 14, 2012
No Comments Yet

Here’s what’s behind the no & low-alcohol drinking trend