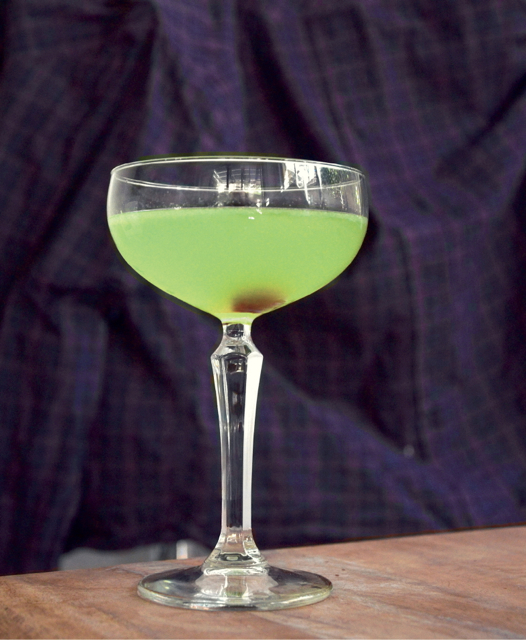 There was a time when the mark of a cocktail bar was the line of fluro-coloured liqueur bottles sitting on the back bar. You can scoff, nowadays with your amari and small batch organic moonshine, but they’re there in old photos of the Bayswater Brasserie and in top bars around the country. It was a thing, man.

Drinks were more colourful in the 1980s. Orange coloured drinks — hey, that was your mango daiquiri. Strawberry coloured? A strawberry daiquiri! (Yes, they were often some form of “daiquiri”). And blue drinks — which have seen their own ironic revival — were a staple on every little cocktail list around. And then there was The Green, thanks to the luminous Midori.

So from the decade of Indiana Jones as well as mango Weiss bars (they’re as good as they ever were), comes this drink all the way from Melbourne. That’s right, the Japanese Slipper was an Australian invention.

There was a dinner put on for hospitality people (some people say it was a Suntory Cup cocktail, but that’s not what we hear) in Melbourne at a function centre in 1986. A bloke by the name of Jean Paul Bourgignon came up with it for that night, tooling around with this liqueur called Midori.

The thing is that this drink isn’t as bad as West Coast coolers and blue light discos, despite the snark it sometimes gets. (come on, they weren’t bad at all). That’s not to say it couldn’t use some updating.

And, if you ask us, the updating comes by way of a product more popular in 1880s than today, and an addition called for quite often by no less than Jerry Thomas himself.

(One can only imagine what Thomas would have thought of Midori).

Bokers Bitters was Jerry Thomas’ go-to brand of bitters back in the day, and adding a few dashes to the Japanese Slipper gives it a completely new dimension. It adds a nuttiness, lengthens the palkate and rounds out the sharp edges of the lemon juice.

The Japanese Slipper is similar to good, sweet reisling. You know, like the German stuff that sells for hundreds a bottle and is called Beerenauslese. I’m not saying they’re the same. But the idea is similar.

They’re similar because there is plenty of sugar in this drink, plenty of sweetness, just like that great, sweet riesling. And like riesling it’s got a killer kick of acid to cut through the sweetness and that’s the reason this drink has been around for nearly thirty years: the one-two punch of sweetness and acidity. The acidity kickstarts the saliva flowing, and makes this an approachable (albeit sweet and on the cloying side) drink to cleanse the palate with.

But why should this drink be one that you have to hand? Because sometimes you need a drink that is sweet, for that punter with a sweet tooth who ain’t a fan of big spirits. You might want to recommend a different drink, a drier drink, a punchier drink — a more obscure drink. But sometimes you ought to give the customer what they want, and this drink is a good way of doing that.

0
Australian Bartender November 18, 2013
No Comments Yet