Here’s our chat with Australia’s Bacardi Legacy winner, Alissa Gabriel, from the April issue. The global finals take place this week in Sydney, with competitors from around the world in town for the competition.

We interviewed Gabriel when she was fresh off the stage from her victory to find out what it feels like to be representing Australia in one of the world’s big grand slam cocktail competitions on home turf. Check it out and get behind her and her drink in the lead up to the global final.

How does it feel?
I’m still in shock, I’m so overwhelmed, and I honestly wasn’t expecting it. The competition that I went up against today – they’re all so amazing, and it’s a fantastic experience.
I honestly didn’t think I was going to win — it’s not because I didn’t have confidence in my drink, or my story, but because I had so much confidence in everyone else!

What’s the inspiration for your drink?
My drink was inspired by Jose Leon Bouteiller who was a French confectioner and distiller, and he lived in Santiago — this is before Bacardi was actually producing rum. And he was renting a house from the Bacardi family, so when Don Facundo found out there was a man renting a house from him that had a pot still and knew how to make spirits, they obviously started talking together about the process behind distillation and together they actually formed the Bacardi company. Before the name changed and Bouteiller retired it was called Bacardi Bouteiller and Compania.

How did you find out about that?
When I read Bacardi and the Long Fight for Cuba, that gave me less than a paragraph of information. From what I read there I went deeper into it. There’s not much information but between the thirty articles I read, what touched me was that this relationship was such a deep part of the history, about the helping hand — that’s what it was all about for me. It wasn’t about Bouteiller, even though I named my drink after him. It was more about the concept that everyone needs to ask for help at some point. Facundo asked for help, and Bacardi may not be here today if he didn’t.

So what are you going to do now in the lead up to the global finals? It’s a big deal.
There’s a lot more pressure considering the fact that it is in Australia. And as much as I’d love to fly to another country, having that home ground advantage means that I think I’m going to have so much more support from the Australian bartending industry and it’s such an amazing group. I know in Brisbane, we’re all so tight — they got behind me 110% and supported me the whole time.

What would you say to get other Aussie bartenders behind you?
Honestly if I go up to someone, and if they don’t know my drink, I’ll give them the spiel. I’ll give them the Bouteiller’s falernum, I will tell them the story and then if I have to go to every bar in Australia, then that’s what I’ll do. 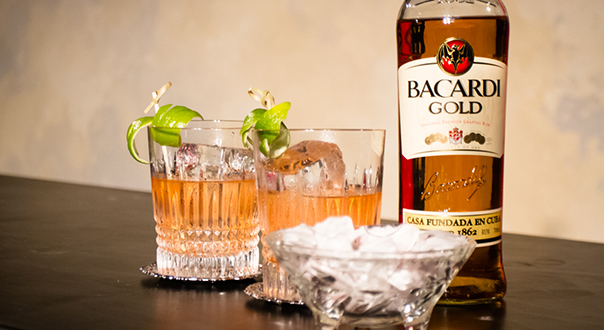 Rinse a rocks glass with Chartreuse. Add Bacardi Oro, Noilly Prat, falernum and Peychaud’s Bitters to a mixing glass. Stir until chilled. Strain into a crystal rocks glass over block ice. Garnish with a lime twist and serve.

“It’s more about the rum and the falernum – the Peychaud’s and the Chartreuse only add a small aspect to the drink. Considering how boozy it is, and how when you taste it, you don’t expect that [it’s] boozy,” said Gabriel.