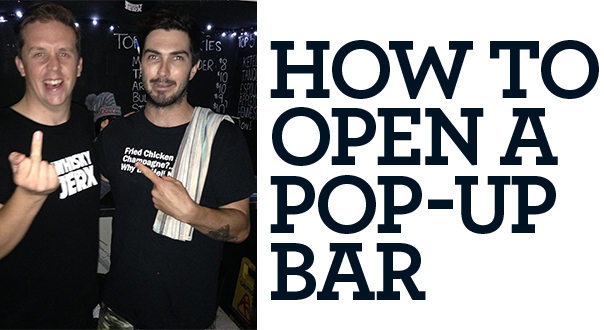 Lee Potter Cavanagh (left) and Reece Griffiths, who along with Ben Blair started the Whisky Jerx pop-up earlier this year

The pop-up bar — a bar that opens for a limited run and then closes or moves on — has become a common phenomenon. It’s not just bars that pop-up — fashion stores, restaurants, even far-flung burger chains like West Coast USA’s In N Out have made one-off appearances in Australia.

To illustrate the idea, take Mission Chinese, a pop-up from Danny Bowien in San Francisco. It operated out of a regular Chinese shop. Customers would come in and be presented with two menus: one, featuring some 100 dishes from the regular Chinese place the other with a couple dozen dishes of Mission Chinese. The two businesses shared a kitchen, they had two separate woks, and despite the unconventional arrangement Mission Chinese made Bowien an overnight sensation in the US food scene. Bowien, for his part, reckoned it was the first pop-up, ever.

So you get the idea, but how does opening a pop-up work? What do you need to understand before you get started?

We asked Lee Potter Cavanagh, who along with fellow owners Ben Blair and Reece Griffiths started the Whisky Jerx pop-up that ran for eight weeks earlier this year after winning a competition run by Monkey Shoulder , to tell us just how you might go about it.

You have a limited window of time to get people in
We tried lots of different things, that was definitely the biggest challenge.

The biggest challenge, especially with a pop up, is that where people go to drink is habitual, and trying to break into that habit normally takes a while. You start a bar normally, you have a slow burn, you build and build and build and if you do it well you end up being busy.

We didn’t have that luxury. We had to drive people in so we did a pretty big social media campaign.

We knew that at the end of eight weeks we need to have no stock. Everything must go!

Whisky Jerx was inspired by Wayne’s World — the space modelled on Wayne’s basement.
The Wayne’s World thing was the biggest hook, coming up with that idea — it proved to be such a popular idea. We got such massive online coverage because of that — international press, all around the nation within the space of two days.

Does the idea for a pop-up need to be different to a normal bar?
With a bar that’s going to be around for a while, customer service and quality are things that will get people to come back and slowly you’ll build a reputation.

With a pop-up you don’t have that luxury. Even if you’ve got the best customer service and quality in the world, by the time people work that out and word of mouth spreads, you’re closed! You need to have an idea that will drive people in the door and get people reading about it or wanting to come visit. We hit on one that gave us a lot of material.

How did you get the idea?
It was just one of those things, a random idea we had. It was a film I really loved as a kid, and speaking to Reece and Ben they both identified with it as well — it just really fit in with everything. It was a nice, easy way to communicate a feeling — a time our lives, the things we liked. The things that mean something special to us, but can be hard to communicate. So that film I thought was a nice way of communicating a lot of that.

Be prepared for spikes in trade
There was one week where it just pissed with rain all week, you can’t excuse poor business based on weather, if you’re doing something awesome people will come anyway.

The first two to three weeks [were good], then we slowed down a little bit for two weeks. But this last week was really good.

What are the biggest challenges?
Aside from getting people in the door and coming with an idea that people actually want, once you’ve worked that out, the venue is the next job.

That was a real hurdle for us, and really affected us quite a lot. We would have been much more successful in our original venue.

On the flipside the space has fit perfectly and they’ve been really cooperative with us.

It sounds easy, but it’s pretty complicated
Doing a pop-up in Sydney’s really fucking hard. You essentially need to be operating with somebody else’s licence and DA and have a relationship with them that allows a partnership agreement or a profit share or something, you’ve got to come up with a negotiation which is already hard to do with somebody you don’t know very well, and then to maintain that over the period of the pop-up as well.

So essentially you need to find a business that is either failing or has just failed and do it there. So you’re offering them something they need.

For a pop-up to work, you need to be flexible
We were originally going to be opening down the road. That fell through about two weeks before we were supposed to open, which was a bit of a nightmare. So we pushed it back a week, after we found the venue, because we wanted to make sure the venue was really slick.

We found two other venues where we could have done it, which actually had 3am licences, but the space wasn’t quite right — it wouldn’t have felt as good.

Working a lot of hours is the standard
It hasn’t been that bad [the hours], it hasn’t been that different to what we’ve been doing. But I guess I’ve been opening lots of venues for the past two years so I’m not that unused to a hundred hour work weeks. I guess it’s one of those things: for someone who works 40 hours a week as a bartender, then yes it would seem like a lot of hours. We’ve all opened venues before, so we all kind of understood what that would entail.

Remember that it’s still a business
You got to have someone with their head screwed on controlling the books, someone who’s run a business before and who knows how to control money — not just let it walk out the door. Unless you’re an experienced manager who’s done cost of sales before, I wouldn’t be getting into it.

Should you open a pop-up or something more permanent?
It’s far more risky than opening your own joint because if you open your own joint and fuck up the first month or two, you can borrow a bit of money and learn from your mistakes.

With a pop-up you don’t have that luxury. You fuck up, well, boom: there’s all your money gone. You’re done. You’ll be left with a bunch of stock, and nothing else.