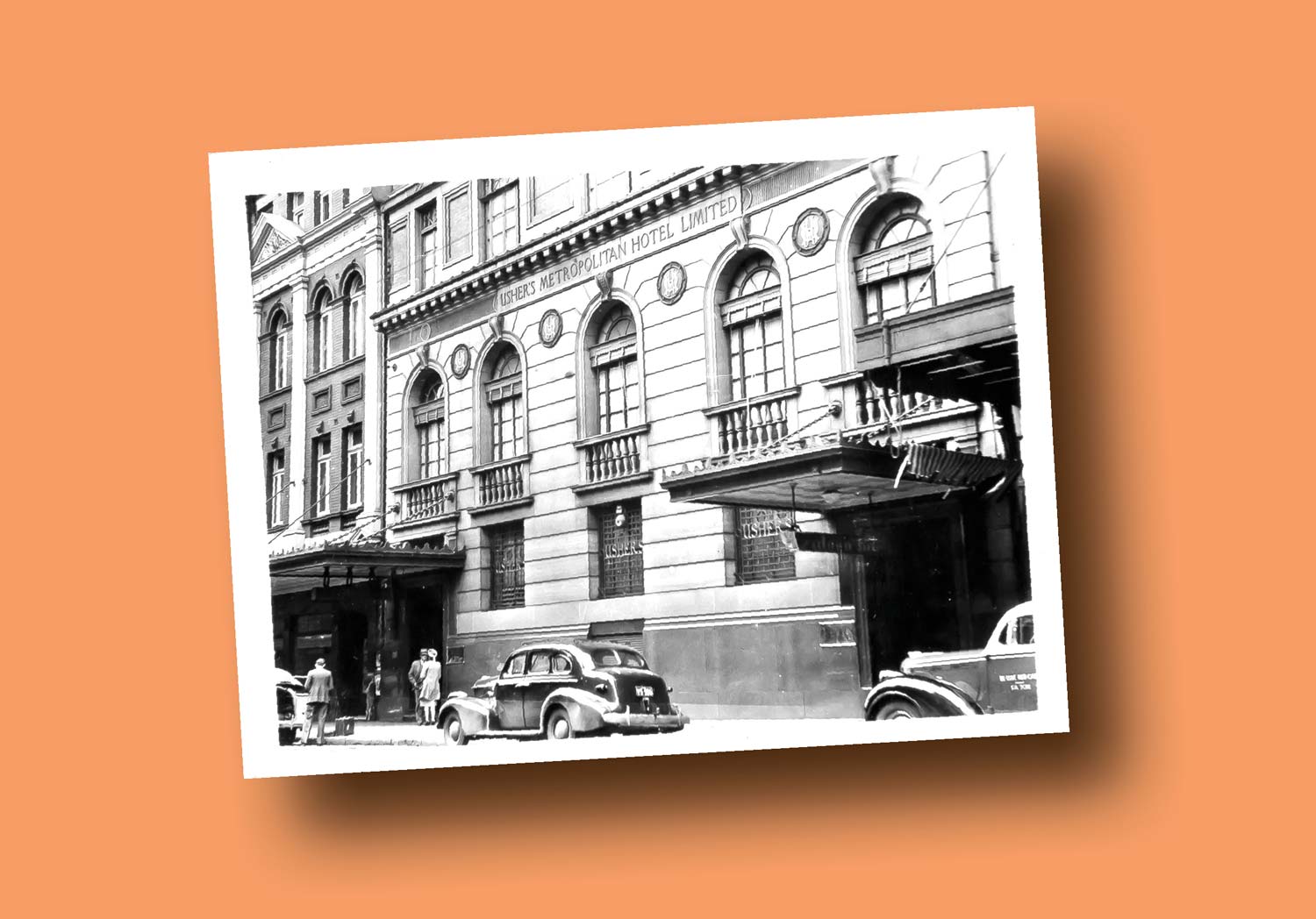 With so much of the grand story of the cocktail being focused on its birth in the United States, its spread to London and Europe due to the harsh laws of Prohibition, the rise of the cantineros of the Caribbean and South America and the ceremonious bartenders of Japan, it’s easy to forget drinks were still being mixed Down Under at the time.

As far back as 1855 punters were able to order ‘fancy’ mixed drinks in Sydney, with local newspapers reporting  “…Large quantities of ale, porter, lemonade, ginger beer were disposed of; whilst among the more fastidious, sherry cobblers, mint juleps, ice creams, fruit ices, Catherina Hayes’s, etc, were in great request…”

And in 1923, there was a piece published in the Sunday Times about the popularity of a guide to mixing cocktails at home, which reported that “the use of the cocktail in Sydney is becoming more and more popular every day, and “mixology” a science in which well nigh anyone can graduate…”

While classic iced drinks were clearly available in Victorian-era Australia, imported with the steady flow of well-heeled tourists daily disembarking cruise ships who demanded the creature comforts they were accustomed to in the old world, and happily consumed by urban citizens who sought to emulate the airs and sophistication of their visitors, we don’t tend to associate this period in Australian bartending history with ‘Australian’ cocktails.

Ask most bartenders today what is the earliest cocktail native to our shores and they will probably answer the Japanese Slipper, created by Jean-Paul Bourguignon at Mietta’s Restaurant in Melbourne in the late 1980s. However a chance discovery of an illustrated cocktail book from 1933 from the long-defunct Ushers Hotel in Sydney contains a selection of unique cocktails created in their First Floor lounge, and may be the earliest example of an Australian cocktail program bespoke to its bar.

A trip to the archives of the New South Wales State Library managed to turn up original copies of the cocktail menu, as well as a wealth of information about the hotel’s history and its proprietor and general manager, one T.S. Carlyon.

Tom Symington Carlyon Jnr was born in Ballarat in the 1910s, son of a former steamboat captain turned hotelier. His father, Thomas Carlyon Snr., had given up his post ferrying goods and stock up and down the Murray River in exchange for a life on solid ground, where he put his mind to reviving run-down hotels. It wasn’t long before there were a chain of Carlyon hotels across Melbourne and Victoria, the grandest of all being the Carlyon’s Esplanade hotel in St Kilda, today known just as the Esplanade Hotel, or the “Espy” to locals.

Not content with delivering hospitality matched by his local peers, Tom Carlyon Senior would often travel to Europe and America to research the most modern practices of luxuries and hospitality to bring back to Australia. While he was on one of his frequent research trips, Tom Carlyon Junior would step in to manage his father’s hotels at the tender age of 25, with a local paper describing him in 1927 as “directing an enterprise that calls for courage, honesty and money, he finds himself no stilted novice, but a veteran before his time.”

With his keen mind for business and with hospitality blood flowing in his veins, it should come as no surprise that he struck out to carve his own path, travelling to Philadelphia to study the modern science of hotel management at the Bellevue-Stratford, the grandest hotel in the world in its time.

Upon his return to Australia, he converted an ailing circus grounds into the Green Mill, a Dutch-themed dance hall with a capacity of 3000 people, decorated with ferns and a working windmill, where hostesses wore green costumes & clogs and revellers danced to Gershwin and big-band music under a twinkling sky of artificial stars beside an indoor lake known as the Zuyder Zee.

His mastery of the art of hospitality made him a minor local celebrity in Melbourne, and a local magazine profile of him at the time highlighted his abilities as a proprietor:

“…It is a science. It involves personality, arithmetic, the fine arts, knowledge of all the developments in the rapid & economical preparation of beautiful foods for extra velours stomachs, the capacity to soothe the ruffled Chryslers of humanity who have suddenly exhibited baby Austin temperaments, and a thousand other considerations. Tom Carlyon went through it with great success.”

While popular, the Green Mill was a casualty of the great depression, and Carlyon was forced to give up his stake in the business. In 1925 Tom Carlyon Snr had passed away suddenly, and it appears the younger Carlyon decided to leave his native Victoria behind and head north to the (at the time) booming hotel trade in Sydney to try his fortunes there.

The next time we find talk of Tom Carlyon Jnr is in 1933, when he published “Exclusive cocktails from the recipes of Usher’s Hotel”.

When first reported of in 1914, Usher’s Metropolitan Hotel was set to be the grandest opening of its time in Sydney, promising to bring the finest traditions of old world hospitality to the colonies and combining it with the most modern of appliances and commodities. The Tuesday 13th, 1914 edition of the Sydney Morning Herald wrote effusively of the hotel’s promised technologies, about it’s electric wine lifts that linked the saloon to the extensive cellar below, of its fireproof elevator system and marble staircases, the butchers shop, the three refrigerated cold-storage rooms, its modern suction “air-conditioning” system and automatic telephones in every guest room; Usher’s Metropolitan Hotel was due to be the finest and most modern of Sydney’s establishments.

It was perfectly positioned as well. At 54 Castlereagh street it was within walking distance of Darling Harbour, where the cruise ships full of American and European tourists emptied their lofty cargo with clockwork regularity. These were people who could afford to travel in style and luxury, who wanted to experience the new world and feel the pioneer spirit, but still wanted to be able to afford the luxuries they were used to: iced drinks, well made food and a competently mixed cocktail.

Once open, the day to day reality of Usher’s Hotel may have been more familiar to our modern experiences of hospitality than you may expect. In 1930, a journalist went undercover to uncover the working conditions at Usher’s Hotel in a piece titled Conditions Bad at Usher’s:

“This hotel treats its slaves worse than cattle…work long hours under a bullying chef…the food served to staff is worse than that thrown into the pig tubes…sweating conditions prevail.” – Worker’s Weekly, Friday 6 June, 1939

The hotel itself had its share of scandals with multiple stories over the years reporting charges for trading after licensed hours (not a modern issue in Sydney after all), multiple suicides and suspicious deaths, illegal gambling, mislabelling whisky, crass vandalism and a man having his ear bitten off in the first floor saloon in a bar brawl.

Conversely, it also played host to international stars of screen and stage, as well as many of the rich and powerful families of Europe and America on their first trip to witness terra australis and the potential of this young nation.

The reason we’ve set the scene for the hotel and the man behind the menu before talking about the drinks is that it is important to understand the context that created this first Australian cocktail menu. Without T.S Carlyon’s upbringing, he would never have travelled the world and seen the importance of importing the new and modern trends of the hotel industry to Australia. Without the location of the hotel and its influx of American and European well-heeled tourists, such a program would never have been necessary or demanded for.

The first issuing of the Usher’s cocktail book can fit in the palm of your hand, a 4×5 booklet that lists popular cocktails of the time without any pretension or presumption. From the evidence left behind it’s not clear whether it was an item guests could buy or if it was something gifted to preferred customers. It’s interesting to note that it includes a recipe for the Marmalade cocktail (the unintentional archetype of Salvatore Calabrese’s Breakfast Martini), first printed in the Savoy cocktail book in 1930; the first edition Usher’s cocktail book was printed in 1931, meaning the recipe was important and popular enough that it made it from London to Sydney and through the printing process in less than 12 months — an amazing measure of time in an era where information travelled as fast as a steam ship could deliver it.

It was apparently so popular that the initial printing fast ran out, so hotel management decided on a second booklet, this time showcasing 10 drinks unique to the hotel and creations of their own bar team. Each drink comes with an accompanying colour illustration from the pen of popular Sydney cartoonist J.C. Bancks, and the booklet’s preface shares hints and tips for mixing cocktails at home.

It’s also amazing to see how drinks made then echo the drinks of today — the Blue Heaven calls for gin, lemon, cointreau, absinthe and blue food colouring; the more astute amongst you will notice that it’s almost the same as Jacob Briars’ Corpse Reviver No. Blue — itself an ironic twist on the Corpse Reviver No.2 — a cocktail first printed in the Savoy Cocktail Book! This must be an example of history unintentionally mirroring itself in some strange unexpected way.

Finally, it’s heartening to see drinks that even at this early developmental stage start to identify with Australia in theme if not ingredients — drinks like the Koala and Kookaburra show an interest in the local character, and ingredients like passion fruit syrup and amontillado sherry appearing on the same menu are a good reminder that there is no such thing as a new trend in bartending, just old themes we riff on behind the stick.

Today only echoes of all these people and place remain. Of Thomas Carlyon Senior and his hotel chain in Melbourne only a faint reminder remains in the T.S Carlyon cup run each February at Caulfield in Melbourne.

The Green Mill in Melbourne changed hands many  times until it was finally gutted by a fire and demolished; it is now the grounds of the Melbourne Arts Centre. Despite all its fineries and all its battles Usher’s Metropolitan Hotel couldn’t defeat the march of progress — it ceased serving July 1st 1961, and the Sydney Morning Herald reported the barman as saying that “it was just like any other night except tomorrow we’ll be reporting to another hotel.”

Today the old shell of Usher’s is the Bulgari diamond store opposite from the back entrance to Establishment. Sadly, there’s nothing there except the old bones of the hotel, with the facade long since stripped and lost to time.

T.S. Carlyon Junior didn’t warrant an obituary in the papers himself, but softly faded off into obscurity, leaving behind Australia’s first American/European-inspired cocktail bar and bespoke drinks program. Perhaps he was a man before his time, and if he had been alive 40 years after he would have been a trailblazer in his industry and an icon of Australian bartending. As it stands, for now he is forgotten. Hopefully this article can do something to change that.

The travelling bartender: Tom Egerton on packing up to settle into Hong Kong