Fruit, acid & booze – what more could a good barkeep want? 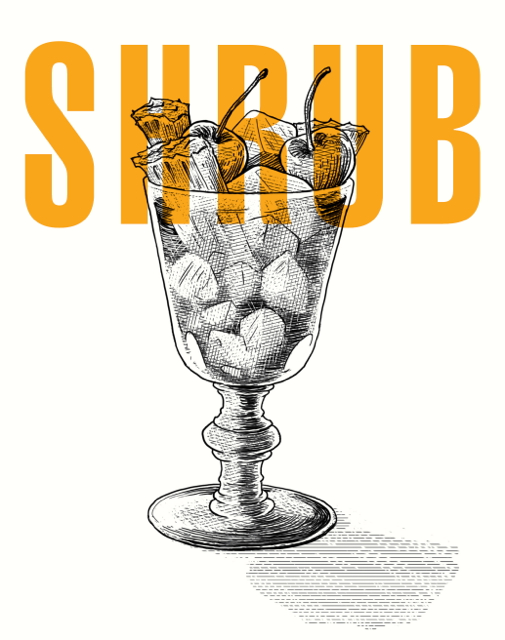 It’s an old fashioned issue, and this is an old fashioned preparation. In this day and age, with fruit being snap-frozen, shipped around the globe and available all year round, preserving fruit is an old idea. But there’s something to be said for the old ways.

What began as a way to keep part of one season’s crop going through lean times — making shrubs is only slightly removed from making jams and preserves — ended up a delicious way to get one’s buzz on from the 17th century onwards.

At its most basic, Shrub is a simple preparation: take fruit, add sugar, then add acid (like vinegar) or alcohol (and often both) then store. Some methods call for the fruit to be boiled, others to let them steep with just sugar.

The technique may have been around for some time before then: there’s something similar back in Roman times with Apicius suggesting that the best way to preserve quinces was to soak them in honey and defrutum — a ‘new wine’ that was grape must reduced by half.

But sugar hadn’t yet made its way from Asia to the Arab world; it only came from there to Western Europe in the 13th century. But it was only in the 17th century, when the cost of sugar had dropped and was more affordable for the masses, that preserves and shrubs really took off.

The common ingredient, sugar, is key to the longevity of the mixtures. Sugar functions like salt in making the solution an undesirable place for bacteria — according to food scientist Harold McGee, “it draws moisture out of living cells, thus crippling them.”

Looks like sugar is bad for you. But it’s what helps recipes like the one for raspberry shrub found in the Whitehouse Cookbook, from 1887, from spoiling. Other recipes, like that for cherry shrub found in The Virginia Housewife (1860) add a good whack of brandy to stabilise the mix (it helps, too, to have the acids arising from the use of cherries and on occasion, citrus).

There’s a resurgence of shrubs taking place in bars across the country. The on the list in bars such as Rockpool Bar & Grill, Sydney; The Bowery in Brisbane has six on its list at the moment, and they make an appearance at The Roosevelt. The Roosevelt’s sister bars, Eau de Vie and Bottleneck, also make use of shrub, according to chef Elliot Vonthethoff.

“Our current favourite is a nectarine and chardonnay vinegar number consisting of poached nectarines, chardonnay, limestone coast chardonnay vinegar, fresh thyme, black pepper and coriander seeds,” said Vonthethoff. “Quince and sherry vinegar was another popular one along with a beetroot and caraway shrub which we came up with for a competition drink,” he said.

They’re using shrub in the creatively named Seasonal Shrub, with Dalwhinnie 15, Lillet Rose, lemon juice and orange bitters. “The fruit component of the shrub changes to make the most of the season’s bounty, hence the name,” said Vonthethoff.

He recommends matching “your fruit and vinegar together – apples and apple cider vinegar is an obvious one, strawberry and balsamic another, quince and sherry vinegar – you get the picture,” he said.

“When it comes to making the shrub, don’t over do it. As in: don’t over cook it – boiling it for any long period of time will mute the flavours of your perfectly ripe fruit and your carefully selected vinegar,” he said. “Don’t add too much – the fruit, the vinegar, a pinch of salt, some sugar, perhaps some wine (make sure it’s one that won’t clash with your vinegar) and a judicious use of spice should do it fine.

“The finished shrub should have a restrained sourness balanced by sweet fruit flavours. The spices should provide a good savoury backbone. Let your palate be your guide.”

In case you’d like a recipe to riff from, take a look at Jerry Thomas’ recipe.

(To make one gallon.)

After standing a day, strain it, adding to each pint a pound of sugar, and skim it clear, while boiling about half an hour. Put a wine-glass of brandy to each pint of the shrub, when cool. Two spoonfuls of this mixed with a tumbler of water, is an excellent drink in warm weather and in fevers.

Got a great venue idea? Speakeasy’s Pathway to Partnership program is looking to fund it

Ones to watch in 2019: Nick Cozens and Jet Hauge

Nick & Nora’s is now open — take a look inside here