All Mount Gay Rums begin with a fermentation molasses, a proprietary yeast and the pure coral-filtered waters of Barbados.  Mount Gay rums are handcrafted from a blend of single column and double copper pot distillates and matured in charred oak barrels, delivering aromatic, flavourful taste, body and refined character.  For our newest rum, Black Barrel, the blend is placed in a second, more deeply charred Bourbon barrel to deliver bolder spice aromatics.

What type of distillation and set up do you use?

In addition to our proprietary yeast, we also use open-air fermentation. The fermentation process contributes to those ripe banana notes (and to some degree, the vanilla notes) that Mount Gay is known for. 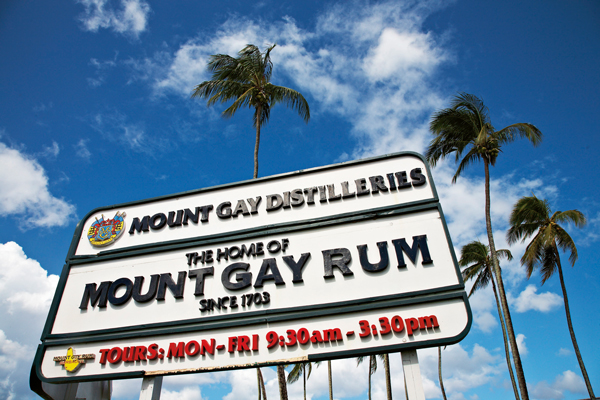 What production processes are unique to your distillery/contribute to the uniqueness of your rum?

The “magic” of Mount Gay is really around continuing a long-standing Barbadian tradition for more than 310 years.  Our rums are handcrafted on the very same hilltop in St. Lucy, Barbados.  Water is still drawn from the very same well that is listed in a deed of 1703 which establishes Mount Gay as the oldest rum in the world.   We continue to hold true to craft our rums the way it was intended then – – full of character and body. This is why our pot and single column stills are skillfully configured the way they are.  The distillates produced are then matured in the traditional way, in small wood oak casks.  We continue to blend matured single and double distillates, exacting proportions in different blends such as Eclipse, Black Barrel or XO.   The various proportions and maturities of the rums deliver a different experience for each of the rums, from incredibly balanced, to robust, to lingering and intense.   However, all our rums hold true to the aromas which make Mount Gay distinctive – – ripe banana, mocha, sweet almond and vanilla.

Our process is a long and time consuming one that does not lend itself to modern more efficient methods. Traditions play a role in terms of style and regional proclivities. The flavour characteristics imparted by the environment in which the spirit was produced come into play throughout the process which is why we have relied on the Trinidad and Guyanese style rums to make the blend.

The rum is fermented naturally – usually for six to seven days but sometimes 10. The stills we draw from are all older and less efficient but impart higher esters and flavour components. Yields of 65% from the wooden pot stills are not unheard of.

Aging is done for three years in charred oak bourbon barrels in hotter climates that are less than 10 degrees north of the equator, which means the “angels’ share” is usually 5 per cent per year which makes for some expensive rum.

Bottling is no easy task as there is testing to be done both before and after the blends are married, as well as chill filtering which adds more time to that process. A sensory panel will be the final testing method and without their approval we will go back and start again.

What type of distillation and set up do you use?

Pussers Rum is a blend of 5 different stills emanating from Trinidad and Guyana. In accordance to the specifications of the blend it is heavily influenced by the Port Mourant double wooden pot still. The still dates back to 1732 and is still in use. Made from “greenheart” wood which is indigenous to Guyana and the Amazon rainforest. The wood is used in construction of piers and jetties due to its ability to remain constantly wet. 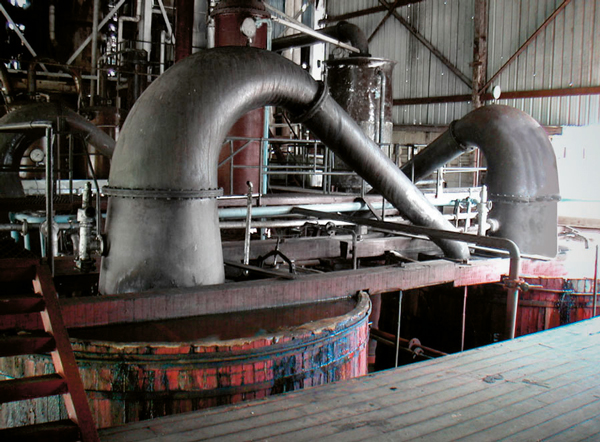 The Wooden pot still resembles a large barrel with its wooden sides and steel bands. The wood adds considerable character in the double pot arrangement imparting in the spirit a deep flavor and rich texture that are synonymous with this region. This still was traditionally the major contributor of rum used in the Royal Navy blend.

The process is time-consuming and imperfect resulting in a lower yield but higher-quality rum. The other parts of the blend are drawn from Pot still and wooden continuous stills that have been used throughout the time of the blend.

Pussers’ blend relies on a natural fermentation. This is where yeasts inherent in the environment are used to ferment the sugars in the open vats.

The high quality of both sugar and the rum are key factors that influence the blend due to the tropical climates, fertile soils, lush vegetation and high quality sugarcane and molasses available locally.

Time – A three stage propagation that is done over 72 hours unlike more modern and efficient methods using a unique strain of cultured yeast.

What production processes
are unique to your distillery/contribute to the uniqueness of your rum?

All of them! We use older less efficient techniques that we feel add to the quality. The methods in which the rum were made, the sourcing of raw materials, the history behind the distillation process and the fermentation using locally grown molasses is an example of uniqueness. The influence of the wooden pot still and its unique DNA cannot be discarded.  The high reflux and the left over high and low wines, mean that no two batches are ever really the same. Each of the stills we use and the method in which the blend is married all contribute to Pussers Rum’s unique flavor profile – bold, complex and yet surprisingly smooth.

Facundo Bacardi invented the process by which we make Bacardi rum, back in 1862. It was a pioneering process, that has remained largely unchanged for more than 150 years. Molasses is fermented with ‘La Levadura’, Bacardi’s proprietary yeast strain, then distilled to create two seperate spirits, ‘aguardiente’ and ‘redistillado’. Aguardiente is a lively, aged spirit distilled to a lower proof, which brings character and body. Redistillado is continuously distilled then aged.

Both are blended and filtered through a unique charcoal which shapes the final spirit.

What type of distillation do you use, and could you describe the set up?

We use continuous column distillation, a set-up designed in 1862 and refined over time.

La Levadura Bacardi is a critical part of the Flavour of Bacardi. It’s a descendant of the yeast first isolated by Don Facundo Bacardi in 1862. Much like a brewery we believe that this yeast is the ‘fingerprint’ of our house style. It’s a critical part of what makes Bacardi taste like Bacardi.

In fact it’s so crucial that the yeast was spirited out of of Cuba before the Castro government confiscated the distillery in Santiago de Cuba. It’s an important piece of the taste of the
final spirit.

What production processes are unique to your distillery/contribute to the uniqueness of your rum?

Bacardi invented so much of what makes Cuban/Puerto Rican rum, indeed, any light rum, that most companies now use the process invented by Facundo Bacardi.
But the yeast, the blending process, and the charcoal blend that shapes the final product, these remain unique to Bacardi rum.

It’s these that create the rum that had been so integral to the Daiquiri, the Mojito and the Pina Colada.
And it’s the rum that’s essential to the global and Australian Bacardi Legacy cocktails that I hope, in 10, 100 and 150 years, we’ll be holding up as classics.