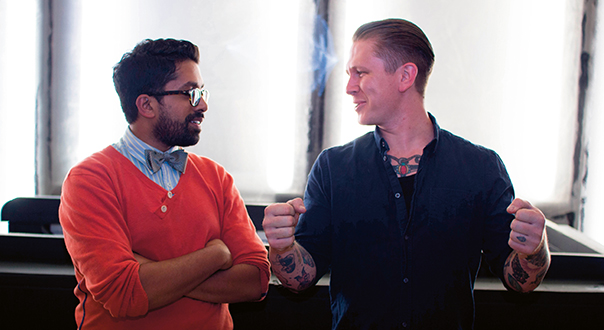 I meet Ryan Chetiyawardana and Iain Griffiths in the Carousel bar at the Hotel Monteleone. It’s the day after the big Spirited Awards ceremony at Tales of the Cocktail. I’m dusty, Griffiths has also had a big night; Chetiyawardana, on the other hand, has been sensible this year. He’s doing just fine, and Griffiths is doing admirably well.

After all their bar, White Lyan, has just been named the world’s Best New International Cocktail Bar.

For the bar that has turned the idea of what a cocktail bar is on its head — and in the space of 12 months won accolades and glowing media coverage — the award is well received. Not that it was in the bag, though.

“It’s amazing,” says Chetiyawardana, “it’s a whirlwind for a year. It actually feels like a celebration of the industry. A lot of people saw [White Lyan] as a fuck you, and it wasn’t at all. And it’s really nice to see people recognise it.”

“Our biggest fear before we opened was industry backlash,” says Griffiths. “It was the one sector we weren’t sure of. We thought it would take a lot longer, and it still is, it’s still taking time to convince consumers, but more and more we’re seeing that in a positive manner. But the industry, there could have really been a “you guys are dicks” attitude.”

That’s because White Lyan, in London’s Hoxton neighbourhood in the East End, does things a little differently.

“I suppose the bit that everyone does know about us is there’s nothing in the bar that is usually in the bar,” explains Chetiyawardana. “So no ice, no citrus, no perishables, no brands — everything’s ours. Water, spirits, cordials, distillates, we either make it or someone’s very kind and makes it specially for us.” 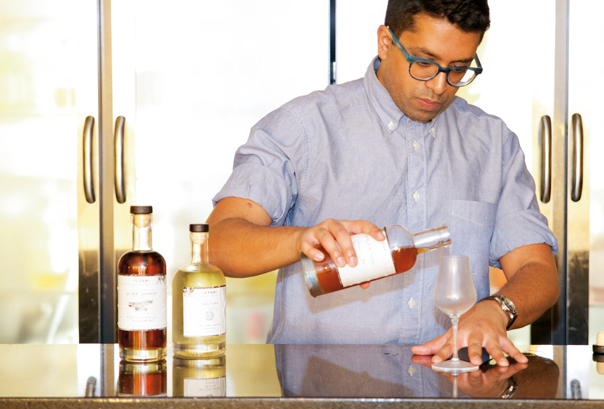 The bar’s early success has already spurred on new developments: it’s been just 12 months (they signed the contracts for the bar at Tales in 2013) but they’ve already won awards, released a retail line of their bottled cocktails, announced a new project opening on September 30th, and to cap it off, have just announced they will be releasing a book.

Chetiyawardana tells me that the idea for the venue — some three years in the making — came about as a result of discussions with his friends about what they didn’t like about cocktail bars.

“I suppose the real aim of the bar was to make a place where we could do what we really loved doing, what I see as old school bartending: just looking after people,” he says.

“Loads of our friends aren’t industry. They’re put off by so many things of what a cocktail bar is, so I thought, let’s just take away all that. Let’s make a bar where it can have all the best parts of a cocktail bar, but we can make sure that everyone is having fun. And that’s the main thing about [White Lyan] — it’s a shit-tonne of fun.”

This means the emphasis is on the customer — and they’re not just paying attention to what seems to be the latest trend.

“As Iain says,” points out Chetiyawardana, “it’s the trend topic of the industry to say it’s not about us; it’s about the customer, but a lot of the time you’re not seeing that in practice — it’s all lip service. And a lot of the time it’s not only the bartenders fault; you see operators put in basic setups that just don’t allow people to look after people. And [White Lyan] was set up to look after people; it was figured that way around.” 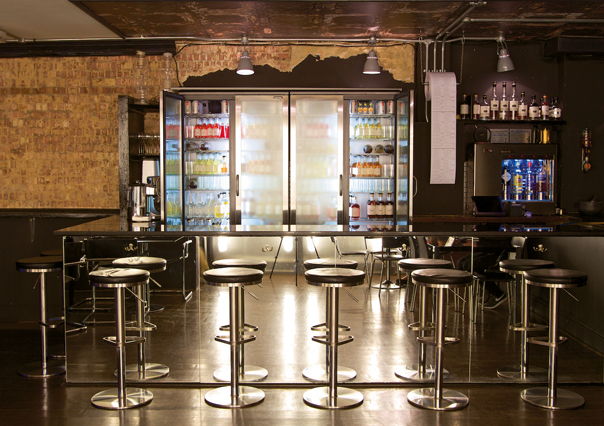 Chetiyawardana explains that they put extra time in to consider every detail. “We didn’t have a massive budget,” he says, “but we looked at everything — [even] the size of the water glasses so we could check back in on people.”

Griffiths chimes in: “This sounds ridiculous, but we have really tiny water glasses. It means that we come back again and again. There’s no pitcher of water, there’s no large cup, no ice — because, obviously — it’s just coming back again and again. You see it click with customers, when they’re like: ‘I can see you’re actually doing that on purpose!’”

With all the drinks being pre-batched, they’ve emphasised the bartenders role as a host. But this begs the question: do you really need a bartender anymore? Chetiyawardana is adamant that you do.

“The skill to me in a bartender isn’t the ability to put together a drink,” he says. “The skill for me is to be able to read people. You could sit at the bar and I could ask you a hundred questions, and you would get the perfect drink — and you would be bored to fuck. Or, you’ve got a bartender who comes in, makes you feel relaxed, and almost passively without you knowing about it, is assessing what you’re mood is, and is trying to help you to a place where you are happier. And that’s a shit-tonne of experience, you can’t just throw people into that.”

“I actually think that the reason why we [hire] such veterans of the industry is they’ve learnt their way to doing that through working different bars, different scenarios. They know drinks inside out, they understand how much information to give to the right person, how much to step away — I actually think we need the most skilled bartenders because of that. Because there’s none of the fluff, you can’t hide behind a shaker, you’ve got to be able to bartend, and to us bartending is looking after people first and foremost.”

Griffiths illustrates this point: “On our opening night, we served two Manhattans and a Sazerac from order to table in 25 seconds,” he said. “If that is the timing on a drink going up, all you’ve got to do is talk. So we hire on personality.” 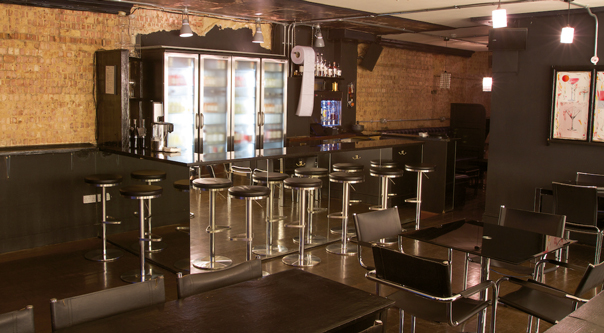 He reckons that the White Lyan bar team is the best in the world. “We have Rob Libecans who used to run the The Baxter Inn; we have Robin Honhold who took over from me at Bramble; we’ve got Metinee Kongsrivilai, who is personality in a human being defined. We’re so lucky to have a team like that, but at the same time, we have to have a team like that.”

Not that the leadership doesn’t have some top experience either. Chetiyawardana has worked at some of the UK’s best bars, with Bramble, Worship Street Whistling Shop and 69 Colebrook Row on his resume; Australian-born Griffiths is no slouch either, having worked at Sydney’s Eau de Vie as well as Edinburgh’s Bramble.

This means that the drinks are undeniably good. So good, in fact, that Beyonce and Jay-Z asked to buy bottles of them to take home (we’ve found a new respect for Beyonce — she was drinking Sazeracs all night at White Lyan).

“What we say to customers first and foremost is, we’re different, but you’re still going to find every drink on the menu — in a different way but a similar flavour — as you would in any other cocktail bar,” says Griffiths. “Because what people want — that hasn’t changed, that’s still the same thing.”

They just have a different method of getting there. They find different ways of incorporating sour elements into drinks, like, say, with the use of acids from vinegars. And that considered approach to the bar translates to the drink offering as well.

“At White Lyan we sell a Beeswax Old Fashioned where we melt down the beeswax, line the inside of the bottle, and then rest the Old Fashioned inside the bottle,” Griffiths says. “So in the same way that new make spirit interacts with oak in a cask to then become whisky, we’re trying to add another level of depth so that it can be an Old Fashioned, but the next step in an Old Fashioned. You’ve got this rich, waxy, honeyed characteristic shining through within your Old Fashioned.”

Of course, pre-batching is the key element here, and the bar has had some critics. “If someone gets a bit pissed off about the pre-batching thing,” Chetiyawardana says, “it’s like, do you really think a chef cooks for you on the spot? No chance. Your meal would take hours. We do exactly the same thing.”

“Like when someone turns up at a restaurant and wants the eight hour lamb,” offers Griffiths. “You order it and it turns up in 20 minutes: no one bats an eyelid at that. If there’s a different approach where we can put forward a Sazerac which hopefully is just as good as one you get everywhere else, if not more interesting and hopefully even better, then why are you going to bat an eyelid about that?”

“It’s interesting that the only people who seem to have an issue with that is actually some journalists,” Chetiyawardana says. “Some have asked, why are you doing drinks beforehand? I want my drink on the spot. And the question we ask is, why? Why do you need to see it made on
the spot?”

Tales of the Cocktail is going to Puerto Rico, and tickets are on sale

Seminar submissions for Tales of the Cocktail 2019 open this week