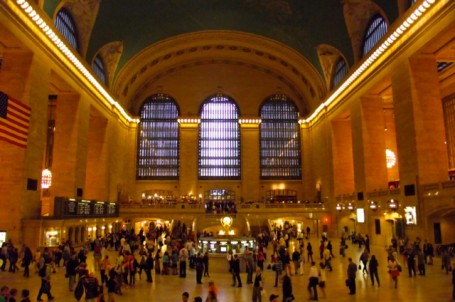 They don’t make bartenders like these guys any more.

In what seems like a world away from the sterilised public spaces that seem to account for so much of our city life, check out this read from Esquire about the bartenders at Grand Central Station — it’s all about drinking on trains, adultery, what men used to drink, and the veteran bartenders that served them:

“Back when I started—I don’t want to say it was for sissies—but men didn’t drink vodka,” said Tom Celli, who started on the railroad’s bar cars in the 1970’s and rose through the ranks to oversee the 30-some bartenders at the terminal. “The men drank brown. Scotch and rye. Some bourbon,” he says. “Now vodka is drunk by everybody, men too. It’s my highest seller.”

These guys see not just hundreds of guys pass through their workplace each day – they see hundreds of thousands. Getting to know your regulars in a crowd like that must be tough, but they do it — and that is something to drink to.

The piece is worth the price of admission based on the story of the Famous Grouse salesman who said if they’re “drinking Famous Grouse, then I’m buying.”
Come to think of it, they don’t make reps like that any more either!

0
Australian Bartender April 5, 2013
No Comments Yet