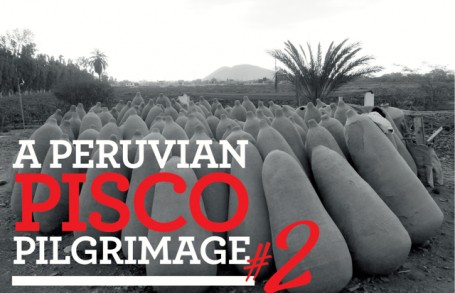 Us booze slingers and purveyors of fine drinks are living in good times. Not only is our cocktail renaissance going truly global, secreting its tasty juices across all corners of the world, but almost all our beloved spirits categories are having their own renaissances.  From gin to mezcal, absinthe to armagnac, and whiskies all across the globe, the variety and quality of what we can get our hands on is increasing every day! One of the most remarkable renaissances has been happening in Peru, and I headed there at the most important time of the year, la vendimia (the harvest), to visit a whole load of bodegas, bars, and even a school of wine and pisco!

A day at pisco school!

Driving into the Ica valley from the north on the Pan American Highway, I reach my first stop: pisco school! CiteVID (The Centre of Viniculture Technology Innovation) was set up in 2000 to improve education and research into the making of wine and pisco, and has had a significant role in the renaissance.

Walking through the grounds from the entrance, the road is surrounded by vines with signs stating the varietal names, including all the types used for pisco and the region’s wines. Jose Falconi, head of the institute, gave me the tour and explained how to make exceptional pisco.

When making pisco, you‘re essentially capturing the fresh flavour of a young wine. It is only permitted to distil once to the strength you will bottle at, and nothing is allowed to be added. No water, no flavourings or colourings, no reactive ageing vessels (i.e. barrels), so there is nowhere for bad flavours to hide. This is why making a great pisco is impossible without great grapes and as clean a process as possible.  Students are taught to use modern de-stemming machines and grape presses, rather than the old methods of stomping and the traditional huarango wood press. For fermentation they part with the more traditional botijas, the pre-Columbian clay jars (pictured, also known as piskus), and use modern stainless steel fermentation tanks or food grade plastic.

This break with age old practice surprises me at first, but this is truly a step forward in the case of Peruvian pisco; all the yeast needed for fermentation is found naturally on the grapes’ skins, and off flavours from contamination are a nightmare for pisco distillers as it’s extremely difficult to eliminate when only distilling once to a low proof. This is also why short fermentation times are employed; as soon as all the sugar has been converted to alcohol, distilling must begin. Malolactic fermentation, a process that happens once primary fermentation is complete, is widely used in winemaking, but in the case of Peruvian pisco it’s highly undesirable. They call the off flavours this causes in the final spirit “baby’s vomit”.

Distillation of Peruvian pisco is unique. Most armagnac and all AOC rhum agricole are also distilled just once, but employ continuous stills distilling to higher alcohol concentrations. There are also other spirits which distill to the proof they are bottled at, with no water added, but this isn’t stipulated as a basic requirement of any denomination of origin other than pisco. This raises the ante, and helps explain why there is some terrible pisco out there, and why when made right, it’s the ultimate aromatic essence of grapes.

Many alembics used by pisco producers are Cognacais style, some complete with “Chauffe-Vin” (chambers for heating the next batch of mosto with the heat of the distilling vapours) but CiteVID’s is English made. All are direct heated, traditionally by wood but nowadays with gas. Like other spirits, the first liquid to come off the still is called the “cabeza” (head), and contains undesirable compounds. Because of the short fermentation and purity of the mosto, the cabeza makes up a tiny amount of the liquid and the cut is made early. It is usually discarded, but traditionally some use it for fuel. The “cuerpo” (body) follows next and will become the final product. At first it comes off the still high in alcohol, but over time the percentage reduces and because no water can be added, the final cut has to be made precisely when the collected cuerpo hits bottling strength. The remaining liquid to come through is called the “cola” (tail), low in alcohol, it’s also discarded or used for cleaning.

After distillation the new spirit is informally referred to as “chicharrón” (pork scratching / term for fried food), and most undergo “reposo” (rest) before it becomes pisco. It tastes fiery and has a savory quality that can be found in other spirits fresh off the still. Reposo must take place in non-reactive vessels, traditionally in tar lined barrels or clay “tinajes” (similar to botijas), however food grade plastic is now the industry standard. The purpose of this is controlled oxidation and for volatile compounds to react and diminish, creating a more mellow spirit that expresses more of the desirable flavours and aromas. The legal minimum time for reposo is three months, but much longer is recommended, and all producers I spoke with told me they wait over nine months.

Categorising pisco is often misunderstood, but Jose explains it clearly; it is either “puro” (pure), made from only one grape type, or “acholado” (regional term for mixed-race), made from a blend of grapes, usually around 70% non-aromatic varieties with 30% aromatic. Puro piscos will in almost all cases state the variety of grape they use, but acholados will rarely display information on their blend of grapes. Like blended vs. malt whisky, many will say acholado is inferior to puro, but this is a matter of preference. Although many acholados are made with mixing in mind, getting the right balance is a great skill and with such a delicious selection of grapes with distinct personalities, the results can be fantastic.

Both puros and acholados can also be “mosto verde” (green must) referring to piscos that undergo an incomplete fermentation. Usually fermentation lasts up to two weeks, but for mosto verde it’s no more than three days. This reduces the yield from around 5kg of grapes per bottle to 8kg, so prices are much higher. Most mosto verdes you find will be puro, but there are examples of mosto verde acholados, such as Pisco Portón.

Mosto verdes generally have similar flavour themes as their fully fermented equivalents, but if you took all of those flavours and made them into jam! It’s more expressive, accentuated in aroma and flavour, richer, and more complex but at the same time more delicate.

Campo de Encanto, a journey to the field of enchantment

Although it’s early (by bartender standards) by the time Carlos Ruben Romero picks me up from my hotel at 9am he has already been working for five hours. He was in the fields at 4am, talking to the harvesters and checking the grapes. This level of commitment is not without purpose; Carlos, master distiller and co-owner of “Campo de Encanto” (field of enchantment), knows the importance of getting the best grapes, picked at just the right time.

As we drive out of Ica and turn off the highway onto dirt tracks weaving through the fields of vines, it becomes apparent why Carlos’s nickname is the ‘Terroir Hunter’. “Just tasting the grapes I can tell how the pisco is going to be. The flavours in the field will become the flavours in the pisco” he explains. Campo de Encanto don’t own vineyards, but Carlos uses this to their advantage by developing relationships with a range of cooperative grape producers who grow exceptional grapes. “I can choose. I can find the best grapes, where as they (pisco producers who own their vineyards) have no choice.”

Irrigation is another important factor due to the almost complete absence of rain, vines have to be flooded three to four times per year. Water here is expensive so many growers will not do it as often as they should. This results in grapes not having enough moisture, therefore not developing good flavour.

Flying home I reflect on what I experienced in Peru. I arrived there straight after a month in Oaxaca so infatuated with mezcal I thought I may never love another category again, but within a few days my smoky agave affair was all but a distant memory. Like mezcal, pisco encapsulates the essence of its base ingredient, and has an honest, un-commercialised charm.

Passionate producers with a commitment to quality and tradition deep in their hearts are producing perhaps the best pisco there has ever been. It’s a great time to get into this category before the crowd, as it’s easy to foresee a time when bars deservingly dedicate much more back bar and menu space to a spirit with such diverse and vibrant flavours.

0
Australian Bartender December 23, 2013
No Comments Yet